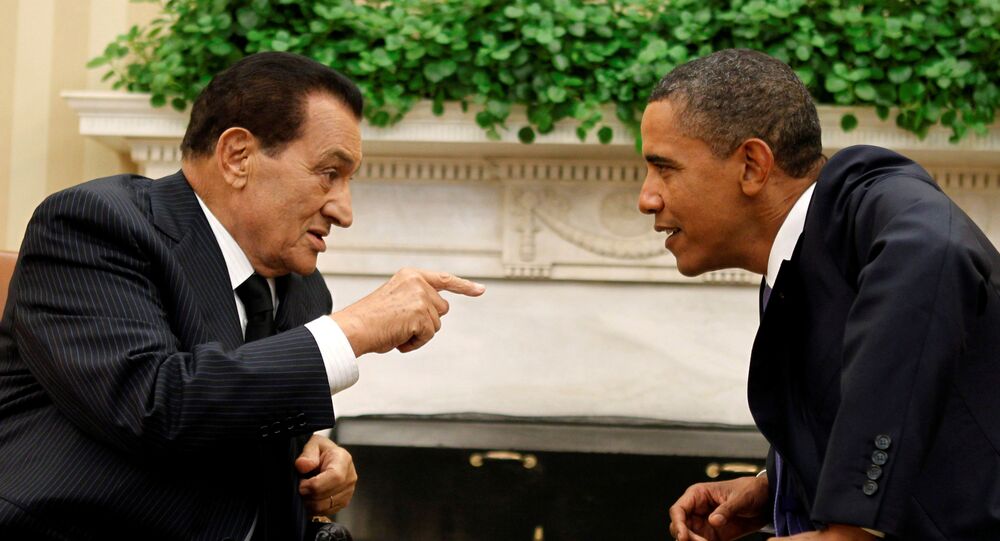 The death of the former Egyptian leader Hosni Mubarak serves as a reminder that the US will ruthlessly discard old allies if they no longer serve the Empire’s geopolitical interests.

‘American-backed dictator’ is how a lot of people will view Hosni Mubarak, the deposed former leader of Egypt who has died aged 91.

Well, that’s true, but it only really tells part of the story. The US did back Mubarak, who came to power in 1981 following the assassination of Anwar Sadat, and for years he faithfully toed the line.

Egypt was the second largest non-NATO recipient of US foreign aid after Israel. The quid pro quo of this was that Egypt maintained its peace treaty with Israel, dropped any Nasserite ideas of supporting Pan-Arabism, bought US military hardware (lots of it), and joined in military coalitions with the US when US Presidents clicked their fingers. Debts owed to the US and its allies were written off after Egypt took part in the first Gulf War against its erstwhile ally Iraq.

But Mubarak earned neocon opprobrium when he did speak out against the second Gulf War in 2003- and warned that the illegal invasion would cause ‘100 bin Ladens’. Richard Perle is reported to have dismissed concerns that the Iraq War would destabilise Egypt by saying ‘Mubarak is no great shakes. We can surely do better than Mubarak’.

The 2003 invasion of Iraq signified quite clearly the underlying tensions between the US and Egypt. Mubarak was a secularist. All through his political career, he opposed  Islamic fundamentalism- and indeed political Islam in general. Wikileaks revealed that the US Ambassador to Cairo Margaret Scoby described Mubarak in 2010 as a ‘classic Egyptian secularist’ who thought that US interventions in the Middle East always ended in disaster.

But for all the talk about a ’war on terror’ against al-Qaeda and the like,  the targets of the US were secular Arab states: Iraq, Libya and then Syria- whose governments were bulwarks against the spread of Islamic fundamentalism. To help them with their ‘regime change’ operations meant the US backing the kind of actors that Mubarak was so fiercely opposed to. When protests began against Mubarak’s thirty-year rule, the US did little, or nothing to support him. In fact, President Obama called Mubarak to advise him to announce that he was stepping down. Mubarak could reasonably have felt quite aggrieved.

The US was keen to be seen on the ‘right side’ of the so-called Arab Spring, and while that meant that geriatric leaders who they’d long supported, like Mubarak and Tunisia’s Ben Ali, would be swept away, the upside of it meant that leaders who they really did want out, like Gaddafi in Libya and Assad in Syria, would also be threatened.

Furthermore, the ouster of Mubarak in 2011 actually served the regime changers purpose as it meant that in Egypt there would now be a new Muslim Brotherhood government which would be on the side of the western-backed ‘rebels’ in Syria. In 2012, Egypt’s new ruler Mohamed Morsi declared in a speech in Tehran that the world had an ‘ethical duty’ to back the Syrian ‘rebels’. The Times of Israel reported how waging overseas jihad had obtained a degree of legitimacy in post-Mubarak Egypt, and that Egypt had ‘become a source of fighters heading to Syria’.

In 2013, Egypt cut off diplomatic relations with the Syrian Arab Republic, a country that Egypt had actually come together with as one nation from 1958-61, under Nasser.

Morsi also demanded that the Shia group Hezbollah withdraw from the fighting in Syria, and echoed neocon calls for a ‘no-fly’ zone to be imposed on the country.

In the end, Morsi’s time in power didn’t last long. He failed to deliver on his promises to improve the economy- and massive demonstrations helped force him out too. The military quite predictably took control in the summer of 2013, under General Sisi. Having aided Morsi’s rise to power, the US took a neutral line when he was toppled.

Hosni Mubarak was later convicted for corruption and the economic and other factors which got people out on the streets against him in 2011 represented legitimate grievances. Under Mubarak, Egypt increasingly became a police state.

There was obviously a very big downside to that, but it also meant that tourists who visited the country received high levels of protection. To put things in their proper context, in 1997 62 people, mainly tourists were massacred by Islamic militants in Luxor.  So there were clear security issues. I remember visiting Egypt with my wife in 2003 during the height of the Iraq War and a member of our party criticising the fact that our tourist coach was escorted by police. I for one was pleased it was.

Mubarak kept Egypt stable, that can’t be denied. The US for most of the time appreciated that stability, but their failure to stand by an old ally when he was in trouble in 2011 was revealing. The US has no permanent friends.

© REUTERS / Amr Dalsh
Former Egyptian President Hosni Mubarak Dies at 91
Subservience towards Washington in the past doesn’t count for anything if the geopolitical objectives change - or it becomes politically expedient to pull the rug out from someone. Look at how the US-backed Saddam Hussein against Iran, before turning against him. Or their throwing of Georgia’s Edvard Shevardnadze under the bus.

Hosni Mubarak was not the first US ally to be ditched when it was convenient to do so. He’s unlikely to be the last.