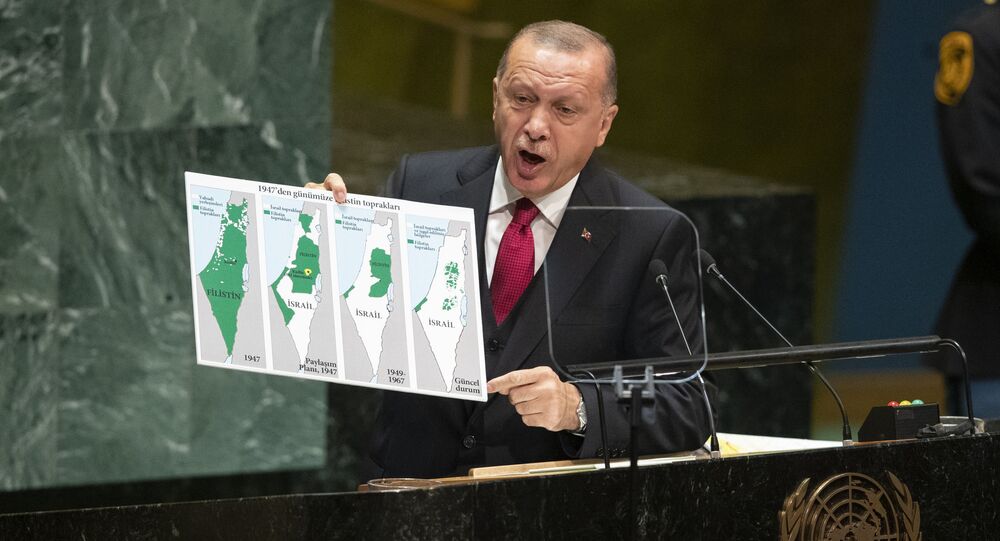 Turkey’s President Recep Tayyip Erdogan is like the proverbial thief who has been caught with his hand in the cookie jar. Instead of slinking off in shame, he goes into a fit of rage as if he’s the one who is the injured party.

This is the situation in Syria’s northwest territory where under a 2018 deal with Russia, Turkey was obligated to maintain a de-escalation zone. Ankara failed to do so. Attacks by terror groups operating from Idlib and Aleppo countryside continued unabated against Syrian civilians in Aleppo city and other government-controlled areas.

Those deadly breaches of the de-escalation deal were carried out in spite of the fact that Turkish military forces were permitted to have 12 observation posts on Syrian territory. That arrangement – to allow a foreign power to have a military presence on its territory – was a major concession by the Syrian government. A concession that has been abused time and time again.

Since the Turks did not stop the terror groups launching offensive operations, well then, all bets were off. From the end of last year, the Syrian Arab Army has moved to finally crush the insurgents operating from their last bastion in northwest Syria.

Russia, which backs Syria, says it supports that nation’s sovereign right to eradicate all terror groups from its territory. The major insurgent faction is Jabhat al-Nusra (also known as Tahrir Hayat al-Sham)* which is an internationally proscribed terrorist outfit. Therefore, the Syrian state has every right under UN resolutions and international law to pursue its objective.

Earlier this week, a military-diplomatic source revealed that Ankara, in fact, supplies terror groups in Syria with armaments as the Turkish military equipment being sent into the Arab country often finds its way into the hands of Jabhat al-Nusra immediately after crossing the border.

The Syrian government and other observers have long been saying the same. Namely, that the Turkish state is not some kind of arbiter in the conflict, but rather is an antagonist through its covert sponsorship of anti-government militants whom it refers to as innocuous-sounding “rebels”.

The recent shooting down of two Syrian military helicopters – with deadly loss of crews – is believed to have been enabled by Turkey supplying the terror groups with US-made surface-to-air MANPAD missiles.

The nine-year war in Syria is coming to an endgame as the Syrian army and its Russian ally close in on the residual terror groups holding out in northwest Syria. This week, Syrian government forces liberated large areas of Aleppo countryside, which will stop shelling by the terror groups of civilian areas.

However, the endgame also poses a precarious situation of possible escalation into an international conflict.

Turkey’s Erdogan has lately been flexing his muscles at Syria and Russia. He says his forces will attack Syrian and Russian aircraft unless Syria retreats from its offensive against the terror groups. The deaths of a dozen Turkish troops earlier this month from Syrian army fire seems to have enraged Ankara further. Turkey claims to have hit back at Syrian positions in retaliation. Flagrantly, Turkey is acting as the de facto artillery division of the terror groups.

Turkish officials are in Moscow this week in a bid to furnish a ceasefire. Erdogan has been on the phone frequently to Russian President Vladimir Putin.

But the truculent tone from Erdogan and his envoys are misplaced. Ankara is threatening to take more belligerent action if the Syrian army does not back off.

What Erdogan appears to be indulging in is a treacherous bluff. Ankara is flaunting support it has received from Washington. “Trump thanks Erdoğan for averting catastrophe in Idlib,” reads a headline in the Turkish media this week. That is, of course, a preposterous distortion of what is going in Syria. Nevertheless, it shows how Washington is shaping up on the side of Ankara.

The American president also told Erdogan that he wants to see Russia ending its military backing for the “Syrian regime”.

The Kremlin rejected that intervention from Washington and said it will remain steadfast in upholding Syria’s inalienable right to fight terrorism on its territory.

As a member of the NATO military alliance, Turkey could potentially invoke a common defence provision and request that the US and other alliance members come to its aid in Syria. If that were to happen, then the Syrian war takes on an international dimension of immense stakes. It appears that Erdogan is dangling this threat of escalation in front of Syria and Russia.

At which point it should be recalled that at the root of the Syrian war is the problem of foreign interference. NATO members, including the US and Turkey, have been fueling the war from their covert sponsorship of terror groups (despite absurd official claims about fighting terrorism).

The war will finally end when these foreign powers which are illegally present in Syria begin to abide by international law and remove their forces from Syrian territory. Those forces include troops, warplanes, military bases and shadowy operators in the CIA and their Turk counterparts.

© AFP 2020 / OMAR HAJ KADOUR
Erdogan Claims Damascus to Pay 'Heavy Price' for Attacks as Syrian Helicopter Downed in Idlib
Turkey and its NATO accomplices no doubt realise the sordid game is up. Their nefarious plot to destroy Syria has failed. What they fear is the terror networks that they have cultivated like Frankenstein monsters will eventually move into Turkey and, like cancer, migrate en masse to other NATO member states. Blowback from hell.

Erdogan, in his arrogance, seems to think that Syria should somehow tolerate these criminals on its land. And he is using a reckless threat of escalation to prevent the heroic Syria army from finishing the job of liberating its nation from a scourge that Turkey and NATO imposed on the Syrian people.