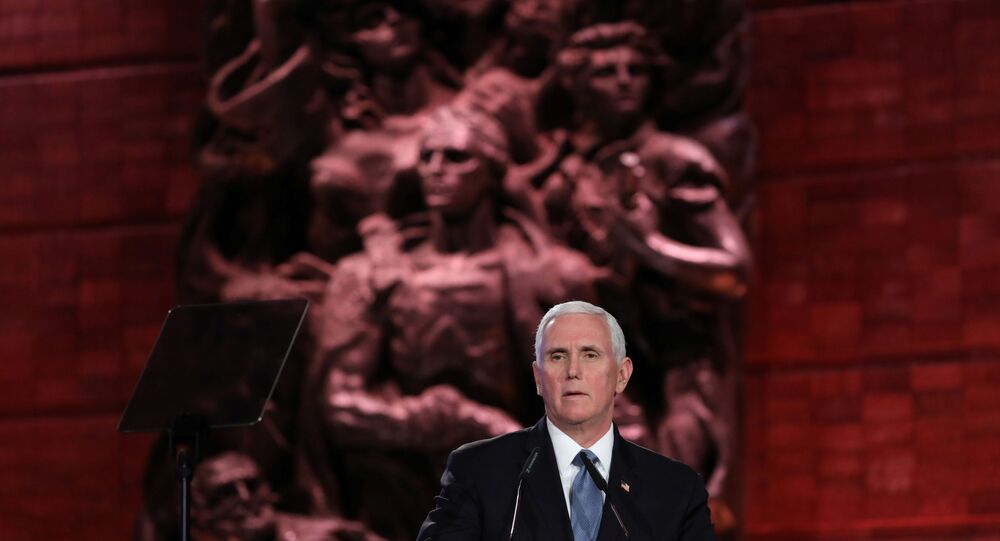 US Vice President Mike Pence used his speech at the Holocaust memorial last week to bang a war drum at Iran. It revealed a deplorable lack of dignity and understanding of the event, despite Pence’s efforts to appear solemn.

But not only that. It showed too how out of touch the United States – at least its political leadership – is with the rest of the world and a growing collective concern among others to ensure international peace.

Maybe that’s why Britain’s Prince Charles appeared to snub Pence, declining to shake his hand while attending the commemoration of the Holocaust and 75th anniversary of the liberation of Auschwitz. Charles warmly greeted other dignitaries, including Russian President Vladimir Putin and France’s Emmanuel Macron. It was curious how he blanked Pence.

But there again, maybe not that curious. Pence and the Trump administration seem to be hellbent on starting a war with Iran. A war that would engulf the entire Middle East and possibly ignite a world conflagration.

Washington’s wanton threats of violence against Iran and its recent assassination of one of Iran’s top military leaders stands as a shocking repudiation of international law and the UN Charter. It’s the kind of conduct more akin to an organized crime syndicate rather than a supposedly democratic state.

The UN Charter was created in 1945 in the aftermath of the Second World War precisely to prevent repetition of the worst conflagration in history and all its barbaric crimes, including the Nazi Holocaust. Over 5o million people died in that war, and nearly half of them belonged to the Soviet Union.

The prevention of war is surely the most onerous responsibility of the UN Security Council. Yet the United States is the one power that routinely ignores international law and the UN Charter to unilaterally launch wars or military interventions. Washington’s threats against Iran are, unfortunately, nothing new. This is standard American practice.

© REUTERS / RONEN ZVULUN
Snub or No Snub? Netizens Laugh Off Prince Charles’ Explanation After Not Shaking Hands With Mike Pence
When world leaders addressed the Holocaust memorial held in Israel last Wednesday it was obvious – albeit implicitly – from their words that the US has become an isolated rogue state owing to its inveterate belligerence.

Putin, Macron, Prince Charles and German President Frank-Walter Steinmeier all invoked the need for collective commitment to international law and peace. They implied that such a commitment was the best way to honour those who were killed in the Holocaust and the Second World War; the surest way to prevent the barbarity of fascist ideology and persecution ever to be repeated.

Those speakers one after another denounced the ideology of demonizing others which fuels hatred and wars. How pertinent is that to the way Washington routinely demonizes other nations and foreign leaders?

In sharp contrast, when the American vice president made his address, his apparent solemnity was contradicted by a blood-curdling call to arms against Iran, which he accused of being the “leading state purveyor of anti-semitism”. Pence urged the whole world “to stand strong against the Islamic Republic of Iran”, spoken as if he was spitting out the words like venom.

There is little doubt that Pence was formulating a rationale for military confrontation with Iran. That has been the consistent policy of the Trump administration over the past three years.

It was no surprise that Pence’s speech was in sync with the usual bellicose rhetoric from Israeli leader Benjamin Netanyahu towards Iran. But what was arresting was just how out of sync Pence and the Trump administration are with the rest the world.

© Sputnik / Alexey Nikolsky
World War II for Dummies? US Vice President Hails Liberators of Auschwitz Death Camp, 'Forgets' to Name Them
It was an odious spectacle to see Pence don a somber face as he talked about the victims of the Holocaust, while his own state wages war against any foreign nation whenever and wherever Washington deems. At an event that was supposed to reflect on the horror and evil of war, Pence showed he had no understanding or self-awareness.

That’s what is perplexing about many American politicians. They seem ignorant of history (Pence gave no acknowledgement to the Soviet soldiers who liberated Auschwitz and other death camps); they are consumed by self-righteousness and arrogance like a puritan preacher without an ounce of humanity.

Anyone who reflects on the horror of war would surely be advocating the respect of and adherence to international law, commitment to peace, and the earnest pursuit of dialogue and partnership among nations.

Russia’s Putin has repeatedly called for the members of the UN Security Council to urgently get together in order to guarantee a multilateral commitment to peace. Putin has also repeatedly appealed to the United States to get serious about negotiating renewed arms control treaties. Washington has ignored those latter calls.

© AP Photo / Czarek Sokolowski
If One's Outraged by Words About Polish Anti-Semitism, One Should Delve Into History – Ex-Polish MP
The American national myth, evolved over recent decades since 1945, views itself as “exceptional” from all other nations. That translates as the US presuming to be “superior” and “above the law that others are bound by”.

Mike Pence’s menacing words and attitude at the Holocaust memorial showed a disturbing and pernicious disconnect with the need for preventing war and genocide. It was a disgraceful dishonouring of victims.

Out of sync with the world, the US has returned to the ashes and lawlessness of 1945.