Am I the Grinch?

Today is traditionally the biggest shopping day of the year but at the risk of sounding like the Grinch who stole Christmas, isn’t it about time we all stopped spending on ‘stuff’ that we don’t really need?

I’m with six-year-old Cindy Lou Who. In the movie she is having what she calls, "yuletide doubts". She believes that everyone is missing the point about Christmas by focusing too much on the gifts and festivities and too little on the personal relationships.

I had my own Grinch flashback yesterday when I went to the local council dump to get rid of the mountain of cardboard that has amassed in my house via Amazon and their deliveries. Now we have to throw away rubbish before and after Christmas! Is this progress?

The skip with most ‘stuff’ in was named ‘small electrical appliances.’ It was stuffed full of last years "Stuff" TV’s, radios, DVD players, computers, waffle makers, microwaves and computer games. You get the picture? Were all of these items really rubbish or broken or were they just out of fashion or obsolete?

Why don’t we mend anything these days? Why do we live in this throwaway society?

The Grinch of course lives On Dumpit to Crumpit mountain which is the town dump. His best speech which everyone should learn by heart is this:

Back at home, I attempted to find the Amazon Prime TV channel to watch the Grinch on my flashy and, I thought, modern widescreen TV but it had disappeared.

My daughter’s boyfriend told me that my TV no longer supported the Amazon service as it was made before 2013. My TV was obsolete. But don’t worry, he said as he pulled out his mobile phone, he could order something online that will enable the TV to take Amazon again and it would arrive within the day!

© Sputnik / Kirill Kallinikov
In The Heart of Red Square: GUM Hosting Sputnik's Christmas News Days
I could buy another product to get what I used to have!  But how can a £1200 TV be obsolete after only 6 years? It still works perfectly, apart from Amazon, the picture is great and the sound perfect. I’m sorry but it is not going in to the skip.

My mate was telling me that "the must have" gadget this year is one of those Amazon Alexa things. He was saying it was brilliant that he could dial in and listen to what was happening in his home when he was driving.

Then he said he had just got one of those doorbells where you can see who is ringing your bell and pretend you are at home.

I asked him why he needed to know what was happening when he was out? He looked at me non-plussed. Then I asked him how many times he had been burgled by someone ringing the bell to see if the house was empty? None was the reply!

And if you can spy on your own relatives with an Alexa, what can it do to you?

Is progress really the ability to shout at Alexa to turn the lights down or the heating up without getting up off your fat lardy arse?!

That’s ‘stuff’ I definitely do not need.

How many presents will you buy knowing full well they will be returned on Boxing Day?

Of course, this rampant commercialism is being fuelled by Amazon and mobile phones. We can all order from the comfort of our living room and even get it delivered the same day. Picked and packed by someone on so called 'slave wages' and delivered by someone who is working in the gig economy and working to a schedule so tight that some of them are having heart attacks. What a wonderful world we have created.

Then there is the food!

Did you get caught up in the supermarket rush to grab that last bag of sprouts! As I was giving myself a double hernia pushing the overladen trolley to the checkout I asked the woman on the till (yes, I still prefer a human at the checkout, and yes, I know that makes me Gammon!) when would they be open again. She cheerfully replied Boxing Day at 10! I wanted to punch Lord Sainsbury in the face! 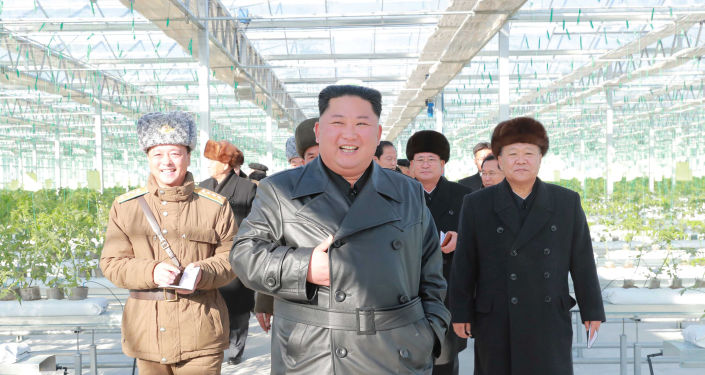 © REUTERS / KCNA
Wrapping a Christmas Gift? New Work Reported at North Korean Factory Linked to Long-Range Missiles
So why were people buying mountains of food that isn’t destined for the family’s stomach but will go directly in the wheelie bin? Do food shops really need to be open on Boxing Day?

Meanwhile, according to the Big Issue and Shelter there are over 5000 Brits sleeping on our streets and over 320 thousand homeless people living in the UK. Merry Christmas.

Where will all this madness end and does all this stuff make our lives easier or more importantly happier? I am coming to the conclusion that they do not and we must all try and resist this annual celebration of commerce.

I am really happy that my whole family is back for Christmas and we are trying to resist the pressures of Mammon.

Tonight, we will eat and probably drink too much whilst playing a card game that we have been playing since they were kids. We call it Scale 40, and Lisa and I were taught it by a Canadian couple we met on Holiday over 30 years ago. It is our family game and yes, we play with real cards that you hold in your hand!

As Cindy Loo’s dad says towards the end of the Grinch, "I don’t need anything more for Christmas than this right here. My family".

Merry Christmas to you and yours too.