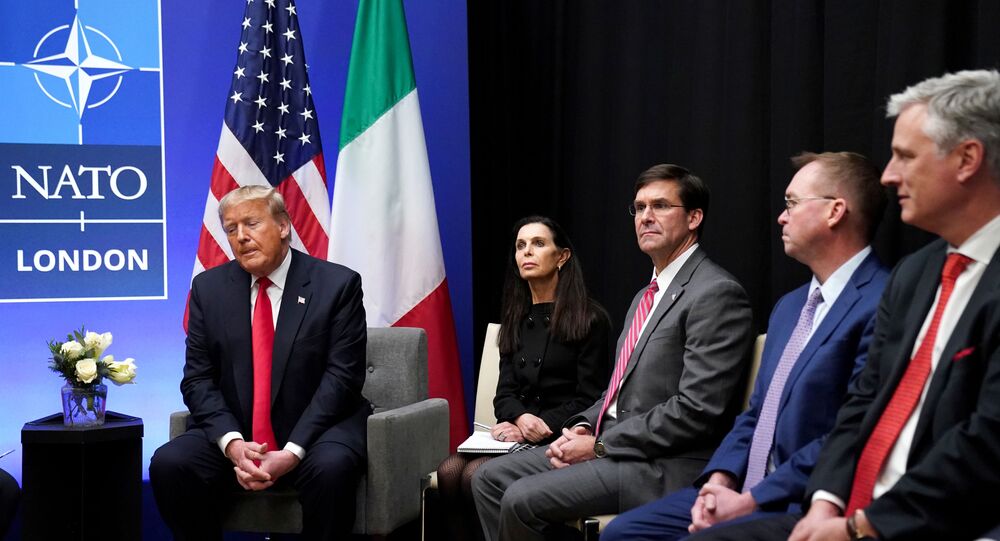 The splits and rancor at the NATO summit this week could not be concealed, even by strained calls for “unity”. The US-led military alliance is a dinosaur well past its extinction date.

Boris Johnson, the British prime minister, did his best to rally a sense of unity as the two-day summit hosted by Britain came to a close. The event was supposed to be a celebration, marking the 70th anniversary of NATO’s founding.

Far from being a “happy birthday” party, the NATO gathering descended into embarrassing farce with bickering and jibes. Video footage appeared to show the French, British and Canadian leaders making fun of American President Donald Trump over his rambling press conferences. Trump then hit back, accusing Canada’s Justin Trudeau of being “two-faced”.

There were other spats, between France and Turkey over Ankara’s military incursion into northern Syria against Kurdish militants, whom France and the US regard as allies. Turkey was also chided for buying the S-400 air defense system from Russia.

However, the biggest clash came between Trump and France’s Emmanuel Macron, who was taken to task by the American leader for his recent media remarks about NATO being “brain dead”. Trump said those comments were “very, very nasty” and “disrespectful”. Macron bridled at their joint press conference, saying he stood by his earlier critical comments.

It was toe-curling stuff, especially the lecture on politeness coming from Trump who himself has several times in the past disparaged NATO as “obsolete”.

Jens Stoltenberg, the Norwegian secretary-general, tried to smooth over the ruffled relations by claiming: “NATO is the most successful alliance in history because we’ve changed at the world has changed.” He went on to describe the 29-nation military bloc as “agile, active… adapting.”

That was after he pointed out that the combined NATO military spend was set for massive increases. An extra $400 billion will be forked out by the alliance by 2024, said Stoltenberg, on top of the current $1 trillion.

© REUTERS / Kevin Lamarque
U.S. President Donald Trump speaks during a meeting with NATO Secretary General Jens Stoltenberg (not pictured), ahead of the NATO summit in Watford, in London, Britain, December 3, 2019

This is not about being “agile” or “adapting”. It’s about what NATO has always done: actively expand its military forces on a global scale in a way that deliberately destabilizes security and thus creates “challenges” that “need” to be responded to.

At this year’s summit, the NATO leaders have “for the first time” discussed China as a collective security challenge. They also discussed making “space an operational domain” for military technology.

And, of course, Russia featured as the time-honored “bogeyman”, with Stoltenberg talking about increasing battalions on Russia’s borders to “protect Poland and the Baltic region”.

There were also a few token statements about “fighting terrorism” thrown into the mission mix during the two-day summit near London.

But the “anti-terror” platitudes can’t hide the fundamental purpose of NATO which is expansionism and the creation of international tensions, conflicts and enemies, or more politely “adversaries”.

When NATO was founded in 1949 until 1991 it comprised 12 members. The organization was supposed to “defend” Europe from attack by the Soviet Union. That was always a much-overblown claim even back in the Cold War decades. Since the Soviet Union and Warsaw Pact dissolved, NATO has more than doubled its size with 17 new member states, most of them proximate to Russia’s borders. The recruitment goes on, with talk of Georgia and the Ukraine joining in the future. Yet NATO inverts Russia’s legitimate concerns over an increasing security threat, by absurdly claiming that Russia is threatening Europe.

It wasn’t Russia that attacked the former Yugoslavia and the Balkans in the late 1990s, nor conducted regime-change wars in Afghanistan, Iraq, Libya and Syria. It wasn’t Russia that oversaw a coup d’état in Ukraine in 2014. In all the mayhem over the past three decades since the fall of the Soviet Union, NATO has relentlessly ramped up foreign wars, destabilizing the entire globe.

Adding China and the militarization of space as new remits to its mission, this is NATO seeking to expand its real “insecurity agenda”, in contrast to its official claims of maintaining global security.

The truth is NATO is a front organization for the military-industrial complex that drives the corporate-capitalist economies in North America and Europe, but primarily in the US. Without NATO’s annual $1 trillion spend – soon to escalate further – the militarized economies of the US and its allies would flounder from the lack of massive public subsidy year after year.

If NATO were disbanded and the war economies of the US and its allies were to cease, then more civilized economies would lead to greater social equality and democracy, which would not be tolerated in Western plutocracies.

The NATO dinosaur plods on… for now. But the disaster of poverty and unsustainable international tensions that it leaves in its wake suggest that the beast is soon heading for long-overdue extinction. Either that, or the planet could very well be made extinct from its reprehensible rampaging.