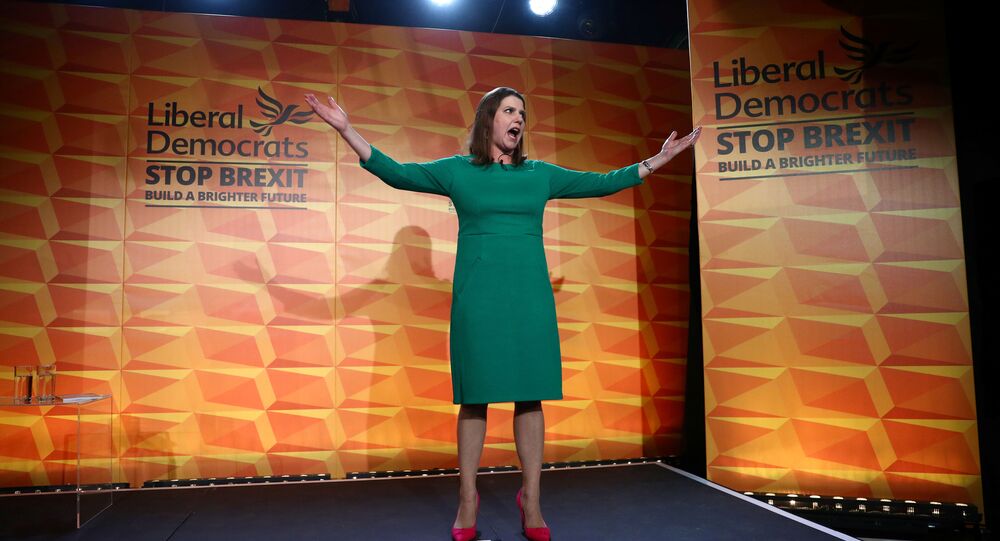 Jo Swinson is Both Queen of Austerity and Warmonger – Dump Her

It took the LibDem leader one second to deliberate, consider and assess the most colossal question of all and it removed any lingering doubts that Jo Swinson is simply unfit to be an elected MP, let alone the Prime Minister of the UK.

Would you “be prepared to use a nuclear weapon” she was asked during a one to one interview and instantaneously, without any context, consideration or hesitation a nonchalant “yes” was the answer, so relaxed it sounded like a laid back “yeah”.

Not Fit to Run a Bath Never Mind a Country

If you were asked such a question wouldn’t you want to consider your answer, condition your answer, shower your answer with regrets and stipulations about last resorts? Jo Swinson displayed for the whole world to see a fundamental immaturity to handle such an important and serious question. Or she displayed the characteristics of a cold-blooded psychopathic murderer without an ounce of compassion or sympathy for the victims of her actions. Either way she is not fit to run a bath let alone a country.

Swinson embarrassed herself at the start of this general election campaign by insisting she was a viable contender to actually win enough seats to become the PM of the UK. It was arrogant and self-delusional nonsense but apparently it was us who were out of touch for laughing openly at such a suggestion. Now she has inevitably had to back down in the face of that most inconvenient of all factors in life – reality!

Lucky to be Elected an MP Let Alone a PM

From being a potential PM Swinson now hopes to hold the balance of power. Within days she will be fighting to return the same number of MPs as of 2017. Days later, as the pathetic gloss and glitter evaporate in the heat of even mild examination of her substance, people will question if she really has party leadership qualities. By the final days of the campaign, her desire to become PM will shrink in ambition to a desperate scramble to remain the MP for East Dunbartonshire in Scotland.

One Second to Decide to Push The Nuclear Button

Hopefully the good people of her constituency will have watched the offending interview where it took her one second to decide to kill millions but twenty-five seconds to discuss air miles policy and try to explain her personal hypocrisy in relation to use of more polluting flights to travel from London to her Scottish constituency than environmentally more friendly train travel.

In 2018-19 alone she travelled by plane 34 times but by train only 9 times. But she really is passionate about the environment and saving the planet. So much so that she accepts donations from a fracking company boss despite the universal acceptance that fracking is a dangerous and environmentally unsound form of energy extraction.

The phoney environmentalist blanked such concerns in the face of cash donations in excess of £10,000 and obediently voted against a moratorium on fracking in 2015 or even a proper review of the impact of the highly controversial technique on climate change, the environment, the economy, and health and safety.

More of a Tory Than Actual Tories

While a member of the Tory/Liberal Coalition government from 2010 Swinson displayed her true political instincts and slipped easily into the cold, callous and cruel Conservative outfit of cuts and austerity aimed at the least fortunate in society. She actually voted more consistently with the Tories than elected Tory MPs. She supported the Tory Government 849 times from 2010-2015. Seventy-two Tory MPs voted with the Tory government fewer times than Swinson.

Not only did Swinson vote to introduce the thoroughly discredited and fundamentally flawed Bedroom Tax which callously reduced the already meagre incomes of poor families surviving on means-tested Housing Benefit; she also voted to reduce benefits for cancer patients and against improving universal credit payments. She was a willing champion of the Tory assault on the welfare state and the rights of the poor. The Bedroom Tax which she so enthusiastically supported and defended has now been legally ruled as an infringement of the human rights of Housing Benefit recipients.

Swinson supported a fracking policy which endangered the environment and a Bedroom Tax which breached the human rights of the poor. Now she supports using nuclear weapons and killing millions of innocent people without a second thought. She is rightly called a ‘Yellow Tory’ by those with an accurate memory of her actions in cahoots with the Tories in the 2010-15 Parliament and cast as the ‘Queen of Austerity’ in the current general election pantomime.

Take One Second to Vote Her Out

© AFP 2021 / Suzanne Plunkett
'I Will Not Accept a Second Vote to Leave the EU' says Lib Dem Leader, Jo Swinson
If there is any justice in the crazy world of politics then Swinson will be dumped by her constituents of East Dunbartonshire in favour of the SNP alternative who opposes nuclear weapons, opposes attacks on the living standards of the poor and refuses to support the Tories in any shape or form. I implore the good people across that constituency to take only one second to decide on ending Jo Swinson’s murky political career.