President Trump has been defending his purported withdrawal of US troops from Syria as a triumphant move to “bring our soldiers home”. He says it’s about delivering on his 2016 election promise to “end endless wars”.

This is just trite electioneering from Trump. Already it is being admitted this week that the Pentagon is not actually bringing US troops home from Syria. Most of them are being transferred to neighbouring Iraq, while a few hundred special forces are to remain in Syria.

Trump talks pompously about scaling back America’s foreign military deployments. But he doesn’t seem to understand what the real purpose is of US military power around the world. It is to protect America’s imperialist interests, for controlling natural resources, markets, corporate investments, intimidating perceived geopolitical rivals, and ultimately – if needs be – using violent force to destroy obstacle nations.

The blunt purpose of US military power is to protect the economic interests of America’s elite class, Wall Street banks and the Fortune 500 corporations. That is a perennial function as long as America’s economy prevails in its corporate capitalist form.

In other words there is simply no realistic option of US troops, navy, air force and missiles being taken home unless somehow the dominant economic model of American empire is abolished and transformed into something genuinely more democratic and humane in the service of ordinary US citizens, rather than for boosting the profits of bloated elites.

At a recent press conference in the White House, Trump even half-acknowledged the lop-sided deployment of US forces around the world but without any sign that he understood why. He said: “I’m embarrassed to say how many countries the US military is in, it’s so foolish”.

Here are some figures, according to Pew Research. Out of a current total US armed services of 1.3 million individuals, nearly 200,000 personnel (or 15 per cent) are deployed overseas in 150 countries. Nearly 80 per cent of the world’s nations have US military present in them.

Trump betrayed his ignorance when he added: “We’re protecting countries that don’t even like us. They take advantage of us. They don’t pay. Nothing”.

This is the great American delusional conceit. Mainstream media, academia, Hollywood, the Washington Beltway, all entertain the delusion that US forces are acting in a benevolent way to “protect” allies from “enemies”. The so-called “world’s policeman”. Closer to the truth, the US military is the “world’s henchman” in the service of America’s capitalist elite.

What is really bothering Trump is his petty obsession that everyone is ripping off America because the Europeans, the Arabs, the Asians and so on are not “paying for their protection”. If Trump used the analogy of “protection racket”, he would be closer to the truth. But, no, in his conceited vanity, Trump feels cheated by stingy, ungrateful foreigners who need to start coughing up.

And so that is why he is huffing and puffing about bringing “our soldiers home”. His annoyance is driven by a superficial transactional view trying to squeeze money out of other nations for hosting, in his wonky view, “chivalrous” US troops, warships and warplanes. 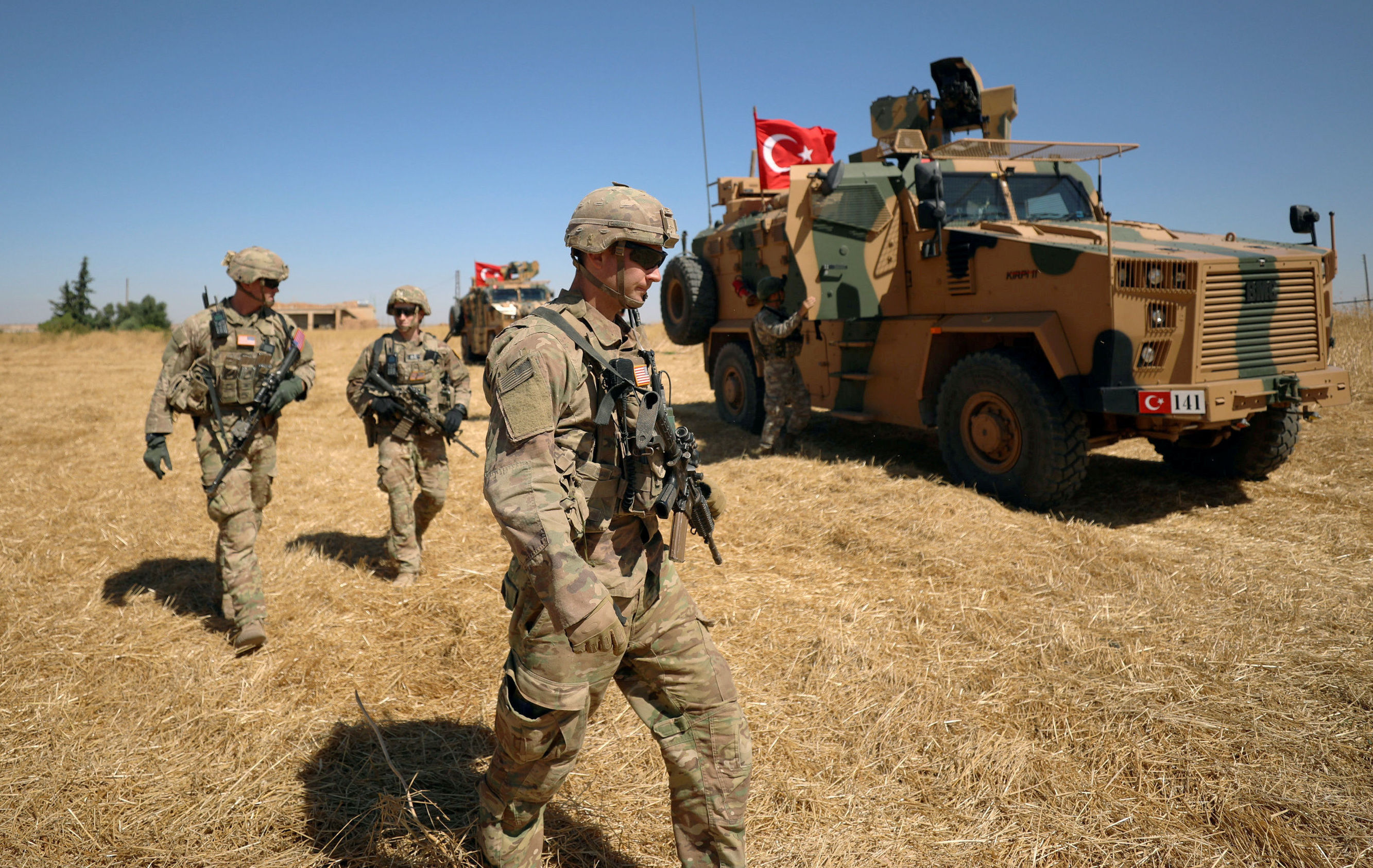 What Trump doesn’t get is that US military power is spread all over the globe not in some noble cause of maintaining peace, but rather in wielding aggression on a sliding scale from patrolling seas to waging full-on war in order to prop up corporate America. In subtle and not-so-subtle ways, the US is at war against the rest of the planet, including so-called allies. There are over 60,000 US troops in Europe (mostly Germany) and over 70,000 in Asia (mostly Japan). Polls show that German and Japanese citizens would like American forces to get out of their countries. But they never leave. Why not? To protect them? Protect from whom exactly?

Trump’s delusions about pulling out US forces from Syria are equally shared by the corporate media and most politicians in Washington, albeit expressed in a slightly different erroneous way.

Democrats and Republicans are slamming Trump for “betraying our Kurdish allies” by withdrawing US troops from Syria. They also claim that the pullout risks a resurgence in the Daesh* (Islamic State) terror group.

The delusion here is that American forces have been in Syria for some noble cause, such as “fighting terrorism”. Therefore, it is argued, they must stay in Syria. The truth is that the Pentagon invaded Syria illegally, bombing that country and its infrastructure, killing thousands of civilians, all for the criminal objective of regime change.

Furthermore, to augment its criminal enterprise, the US has covertly weaponised and directed jihadist terror gangs in an attempt to destabilise and balkanise Syria.

The only US politician who has told the American people the harsh truth is Democratic candidate and military veteran Tulsi Gabbard. But she is now being vilified and smeared by other politicians and US media as a “Russian asset”.

US military forces can never “come home”. Because their duty is to put their footprint all over the face of the planet.

For a peaceful planet to prevail, American military power must be dismantled. But, first of all, that depends on the dismantling of American economic tyranny. And that, in turn, requires the American people rising up against their rotten elite ruling class to win their democratic rights.