Russia to Salvage US Mess

It’s going to be a precarious balancing act, but only one nation can possibly help bring stability to the chaos unleashed in Syria by US President Donald Trump. That’s Russia.

Reports of a deal brokered over the weekend by Russia between Syrian government forces and Kurdish militia are a prelude to a wider effort by Moscow to achieve full peace in the war-torn country. That constructive role played by Russia is no doubt due to the mutual respect it holds among warring sides.

The deal brokered by Russia will allow the Syrian Arab Army to take over control of northern border areas with Turkey which were formerly under the control of the Kurds. Since Trump threw the Kurds under the bus last week and effectively green-lighted the incursion into Syria by Turkish forces, the Kurds have had to subsequently align with the Syrian government. Russia was crucial to facilitating the new alliance.

With the Kurdish areas returning to the control of the central government in Damascus – after five years of US-backed Kurdish occupation – that arrangement of a fully integrated Syrian territory is not just legally proper. It also could placate Turkey’s long-held demands for security regarding Kurdish militants, whom Ankara accuses of being “terrorists” trying to destabilise Turkey.

Russia and Iran have in recent days both warned Turkey to respect Syria’s sovereignty and territorial integrity. With the Russian-backed Syrian army on the border facing Turk forces, it is a fair bet that Turkey’s President Recep Tayyip Erdogan will think twice about escalating the incursion. Having had the Kurdish autonomous area dismantled and under control of Damascus again, the Turkish leader should feel assured to back off from further military action. Again, we may reasonably surmise that Russian President Vladimir Putin has quietly, but firmly, told Erdogan to calm down. Perhaps Putin is the only person whom the bullish Erdogan will heed at this point.

One thing is apparent though. The US and its European allies are a more than ever exposed as a hopeless bunch of losers whose criminal meddling and mischief in Syria, and more widely across the Middle East, leave them without a shred of credibility to resolve conflict.

“This is a monumental failure on behalf of the United States”, commented Aaron Stein of the US-based Foreign Policy Research Institute think-tank, as quoted by Reuters.

Stein added that “it would be the Syrian government or Russia, not American sanctions, that could stop the Turkish operation… The only thing that will stop them is if the [Syrian] regime or the Russians move in significant numbers to where they stop”.

Washington and its European allies have created the entire bloody mess in Syria with their criminal, covert war for regime change against Syrian President Bashar al-Assad since the war on that country erupted in March 2011 – with as many as 600,000 dead. The Americans and other NATO powers have secretly weaponised jihadist terror gangs for their regime-change plot – an intrigue which failed because of Russia’s military intervention from the end of 2015 in order to defend the Syrian nation. 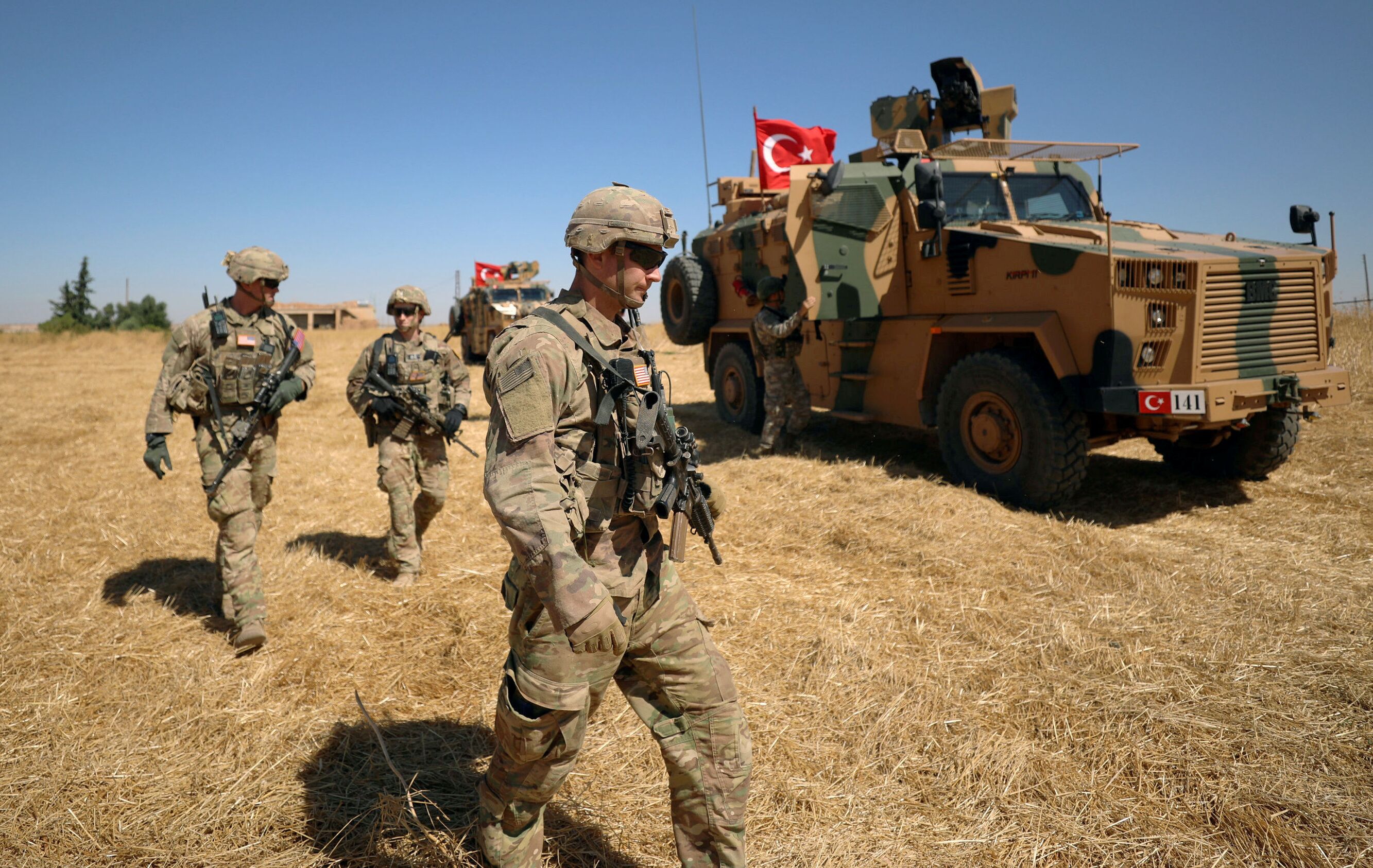 The US and its NATO cronies also used Kurdish militants as proxies to break up Syria’s territorial unity. Officially, Western governments and media claim that the Kurds fought a war against jihadist terrorism. That may be partly true in the murky world of running anti-government insurgents. But, primarily, the Kurds were used by Washington to annex Syrian territory, especially the oil-rich and water-abundant northeastern regions. In doing that, however, the Americans antagonised Turkey by mobilising the Kurds and affording them a de facto state within the Syrian state.

Trump’s sell-out of the Kurds last week by withdrawing American special forces in the region aligned with them has unleashed the mayhem and violence seen over several days. Trying to claw back some credibility, the Trump administration is now moving to heap tough economic sanctions on Ankara to “wreck the Turkish economy”.

European states have also clamoured with condemnation of Turkey for its military operations against the Kurds, which have resulted in many civilian deaths and tens of thousands of terror-stricken refugees fleeing from the violence.

Germany, France, Netherlands, Norway and others have announced suspension of arms exports to Turkey.

This is an incredible debacle. NATO members are bickering with and sanctioning fellow NATO member Turkey. There are even reports of Turkish artillery shelling positions near American special forces to cut them off from their former Kurdish ally.

Meanwhile, Turkey’s Erdogan has basically told Washington and the Europeans to shove their sermonising and hypocrisy. Erdogan knows that the Americans and Europeans have blood on their hands from sponsoring Syria’s covert war, just as he does too.

Washington has no moral authority whatsoever to unravel the mess it has engendered in Syria.

Russia can salvage the disastrous situation because it has earned respect from all sides due to its principled and powerful military deployment in Syria. Moscow will want to avoid delving in too deeply whereby it ends up in a war with Turkey on Syria’s border. Somehow, however, Russia has the right balance between respect, diplomatic intelligence and power to salvage the morass made by America and its NATO cronies.

If peace can be settled between Syria and Turkey and Syria’s territorial integrity restored, then Russia stands to emerge with newfound status in the Middle East as an honest broker and neighbour – unlike the scoundrels barking in Washington and European capitals.