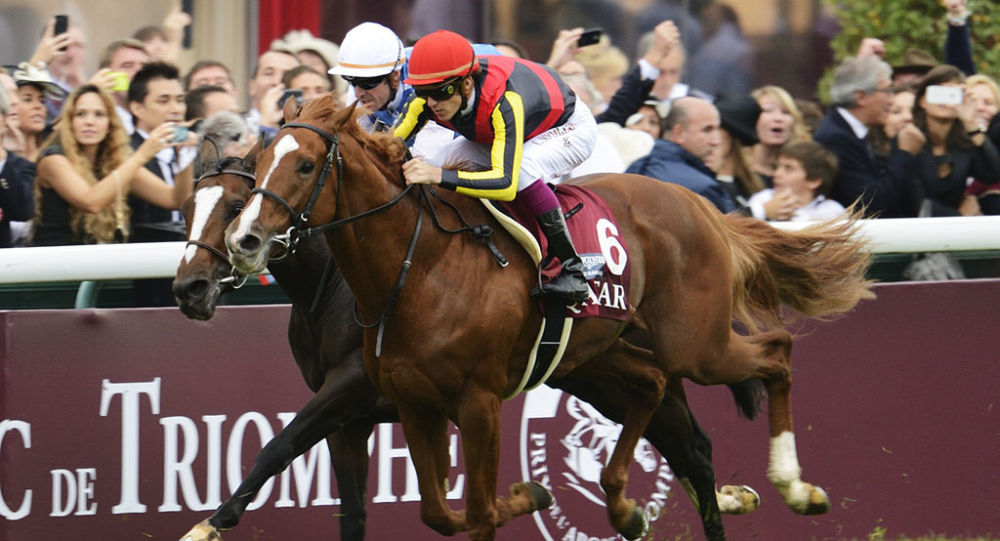 It’s Europe’s richest and most prestigious horse-race, but this year it’s even more eagerly anticipated than usual because sporting history could very well be made.

On Sunday 6th October at 4.05 pm local time, twelve runners go to post for the 98th running of the Qatar Prix de l’Arc de Triomphe, at Longchamp, Paris. One of them is the mighty mare Enable, who will attempt to become the first horse to win the French showpiece three times.

Enable’s first victory in the race (which has a total prize pot of 5 Million Euros), was at Chantilly in 2017, where the Arc was run while its traditional home, Longchamp, was under renovation. Last year, she just held on the fast-finishing but ill-fated Sea of Class. Can she make register the hat-trick and put her name in the record books?

To answer that, let’s first take a look at the key Arc stats.

The draw in the 1m4f (2400m) all-age event is important. While the race can be won from a double-figure wide berth, a low draw is an advantage. Interestingly, five of the last ten winners have been drawn either 2 or 6, with ‘lucky’ stall 6 providing three winners in that period, including Enable last year.

Regarding age, three-year-olds, (who receive weight from their elders), do the best, winning 20 of the last 29 renewals. Four-year-olds are next best,  with five wins since 2007, but- and here’s the big negative around Enable- only two five-year-olds have won since 1975. Horses from this age group are 0-39 in the last decade, and that includes two red hot favourites, one of whom was Treve in 2015, who like Enable was looking to win the race for the third time.

Enable backers can take some consolation though from the fact that Frankie Dettori (Enable’s jockey) was onboard the last-five-year-old to prevail, Marienbard, in 2002, so if anyone can get an older horse to win, it’s Frankie.

What is in Enable’s favour is sex. A feature of the race in recent years has been the domination of fillies and mares, who receive generous allowances from the colts. Since 2010 there has just been one male winner of the race (Golden Horn in 2015), and all the older (ie four and upwards) winners going back to Dylan Thomas in 2007 have been female.

The ideal profile of a modern Arc, is, therefore, a three-year-old filly, in full receipt of the age and sex allowances, drawn 2 or 6. Now let’s take a closer horse-by-horse guide at the twelve runners.

Has won all four starts this season and they’ve been quite impressive wins, so can’t entirely rule out a bold showing; however, only one four-year-old colt has prevailed in the last 18 years.

Very dependable top-level performer; fourth in this last year having not had a clear run; won the Prix Foy for the second year running over course-and-distance last month, should be there-or-thereabouts again and may well improve on last year’s placing from a good draw; strong each-way possibilities, but his age and sex are negatives from a win perspective.

Won the Grosser Preise at Baden-Baden doing handstands last month, that, and the fact he’s a dual course-and-distance winner make him definitely of each-way interest. Wide draw not ideal though; that said Found did win from 12 (when race run at Chantilly)  in 2016.

Japanese raider who finished third in the Prix Foy, over course-and-distance last time, will need to improve on that (which is quite likely) to have any chance, but even so the age and sex stats are against him.

Japanese raider who has won four of his eight career starts, ran on strongly when taking a grade 2 race in Japan over 1m2f last time and from a fair draw could outperform his odds.

The most fancied of the three Japanese raiders, this one looks the best drawn and any further rain (which is forecast) would aid his chances as his best form is around 2m. Could be staying on for a place at the finish.

The stats are against the Czech representative in regards to his age and sex, draw could be better too;, for all that Czech runners tend to be overpriced in the top races (as we noted with Subway Dancer!),  and this one would have won a Group 2 at odds of 25-1 at Royal Ascot had he not been badly hampered. Would be a surprise result if he won but he could place if (as is likely), he’s ridden patiently.

What more can one say about a horse that has recorded ten Group One wins (including two in this race) and won 13 of her 14 career starts? John Gosden’s star will achieve racing immortality if she registers her Arc hat-trick, but while her chances are obvious, this is far from being a penalty kick. We’ve already mentioned how the age stat is against her, her draw could be better, and in addition, this looks a stronger renewal than last year’s with potential dangers a plenty lurking in the wings. Still, all things considered, you have to expect her class to see her home once again and round off a terrific campaign for Gosden and Dettori.

© Photo : N. Clark
Enable, with Frankie Dettori on board, the red-hot favourite for Sunday’s Arc

Finished first or second in last nine starts, down the field in this last year, but the yard’s last winner, Found did the same the year before his success, so can’t rule out on that; Enable though clearly has the beating of her based on their four meetings to date..

Narrowly beaten in the Derby, but a winner of all three of his starts since then, including over course and distance in July. Looks to be improving all the time but would need to improve again to beat Enable, based on a form line through Crystal Ocean who both horses narrowly beat in recent months.

Rank outsider, and while he’ll need to step up a lot on his form to date, he does have two things in his favour: his age, and his ‘lucky’ draw 6.

The Prix Niel, which he won last time, hasn‘t been a good trial in recent years, but still could be the best chance of a home success as he’s the right age and has a low draw.

Enable beat Crystal Ocean a neck when in receipt of 3lbs in the King George at Ascot while Japan, in receipt of 7lbs, beat the same horse a head at York. So on a literal reading of that Enable is around 4lbs superior to Japan, but in Sunday’s race has to concede 3lbs to her rival. That, if the maths works out, has Enable beating Japan by a length, but of course it’s a horse race and other factors need to be taken into consideration too. How much in hand did Enable have over Crystal Ocean at Ascot? How much has Japan improved from York?

While Enable winning, Japan finishing second and Waldgeist third looks the likeliest outcome, there are a number of runners who outside chances can be given to, in a race where at least from a place perspective, very few can be totally dismissed.