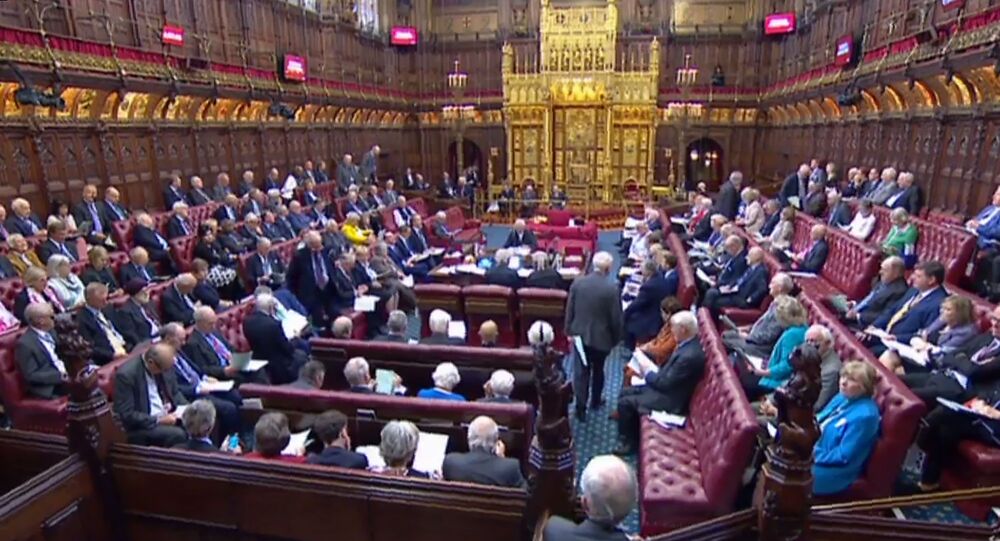 Scrap the Dishonourable Honours System - Abolish the House of Lords

Sometimes words are woefully inadequate when you wish to express your utter contempt and disgust for someone or something. Stinking like an overflowing sewer is the news of Theresa May’s outgoing ‘Honours List’.

It is in the gift of outgoing Prime Ministers to reward flunkeys, friends and failed and flawed individuals with wee baubles or peerages which bestow letters after the names of the chosen ones or titles before them.

The biggest controversy over Malevolent May’s decision to dole out 41 awards and peerages has been the Knighthood conferred on former English cricketer Geoffrey Boycott. The guy played cricket for a living. He apparently enjoyed playing cricket. It is a sport. He was well remunerated for his efforts. Why the hell is he, or any other sportsman or woman, being made a Sir, a Dame or being given an Order of the British Empire?

There is a CBE, an OBE and an MBE which are ranked Commander, Officer and Member of the British Empire. They are all pompous baubles of privilege and rank. No one should be awarded them but May decided to display her cronyism by rewarding her favourite cricketer even though he was convicted in 1998 of a serious assault on his then partner. He was fined £5,000 and given a 3 months suspended sentence so he only narrowly avoided a jail sentence for repeatedly punching a woman. Yet another woman has decided to make him a Sir? No wonder Women’s Aid and other opponents of domestic abuse are so angry:

“With increasing awareness of domestic abuse, and a domestic abuse bill ready to be taken forward by government, it is extremely disappointing that a knighthood has been recommended for Geoffrey Boycott, who is a convicted perpetrator of domestic abuse.

Celebrating a man who was convicted for assaulting his partner sends a dangerous message- that domestic abuse is not taken seriously as a crime”.

Women’s Aid makes their objections well but some more context and condemnation is necessary. The UK honours system is an absolute disgrace. The worst examples are the knighthoods given to the child abusers Jimmy Savile and Cyril Smith, but there are plenty of other examples of the honours system being used to reward disgraced businessmen who went on to destroy their companies through their greed, and a whole host of political cronies.

The whole honours system, including appointments to the bloated unelected House of Lords, is an affront to democracy. In his six years as Prime Minister David Cameron stuffed unelected cronies into the House of Lords at a faster rate than any Prime Minister in history. He thoroughly deserved his ‘Dodgy Dave’ nickname. He stuffed so many establishment insiders into the unelected upper house that the House of Lords is now the second biggest legislative chamber on earth, second only to the Chinese parliament. The fact a Chamber of 800 failed politicians, retired Bishops and Archbishops, assorted do-gooders from the professions and 92 Hereditary Peers, who are there because of birth right, have the ability to delay and amend laws is an unacceptable anachronism which makes a mockery of ‘British democracy’.

In 1910 the Labour Party General Election manifesto was crystal clear. Under the statement:

“The time has come to put an end to their power to override the will of the Commons.”

It declared: THE FEUDAL AGE IS PAST. THE LORDS MUST GO.

That was 109 years ago during which time Labour has been in power for several decades. They were right in 1910 under Keir Hardie but wrong in 2019 under Jeremy Corbyn to nominate three worthies to become Labour Peers. For crying out loud it is a bloody oxymoron – a Labour Lord. They shouldn’t be nominating anyone to sit in the Lords and pick up their £305 a day attendance allowance at a cost to the taxpayer of £70 million a year, they should make good on their 109 year old promise to abolish the place.

Of course it is difficult to honour election pledges when you attract so many hypocrites and class traitors to your ranks. Here’s what former Labour leader Neil Kinnock said about the House of Lords on November 19th 1977 in Tribune:

“The House of Lords must go. Not to be replaced, not to be reformed in some nominated life-after-death patronage paradise, just closed down, abolished, finished. They are unelected busybodies and descendants of brigands, muggers, bribers, and gangsters.”

© Photo :
Lord Kinnock alongside his wife Lady Kinnock. He was made a Lord by Tony Blair, she by Gordon Brown.

Welsh socialist firebrand Neil Kinnock MP was right in 1977 when he wrote the statement above and sat alongside his comrade Dennis Skinner on the House of Commons benches while the other MP’s slithered off to the Lords to listen to the Queens’ speech. It was a protest against the Monarchy and the House of Lords. Today he sits as a disgrace to his class and proof of his empty rhetoric as Lord Kinnock alongside his wife Lady Kinnock. He was made a Lord by Tony Blair, she by Gordon Brown. Between them they rake in several hundred thousand pounds a year in tax free allowances and get to wear the red ermine cloaks of shame.

Hundreds of other former Labour politicians and trade union leaders have walked that shabby and unprincipled path to park their contemptible arses on those rotten red benches.

© Photo :
The truth is anyone who accepts a British Empire Honour or Peerage demeans their life and achievements.

Corbyn’s Labour says they will abolish the House of Lords. They have to understand why many are sceptical about that commitment. Sadly the Greens also nominated Peers to the Lords as did the yellow Tory Lib Dems. With distinction the SNP has never nominated anyone to sit in the House of ill-repute and democratic illegitimacy and stand for its abolition. It is yet another attraction to fight for independence. No House of Lords and, if the grassroots get their way, no Monarchy either.

The truth is anyone who accepts a British Empire Honour or Peerage demeans their life and achievements. They buy into the vile class system and odious British Empire which was built on the blood of conquered, enslaved, starved, tortured and murdered peoples across the planet. By accepting a British Honour you become part of the collective shame that the British Empire represents. Is it really worth it to secure a tarnished title or letters after your name?

Ken Loach is a remarkably talented film director. He is one of a very honourable group of individuals who have turned down a discreditable British bauble. He told the Radio Times in March 2001:

“It’s all the things I think are despicable: patronage, deferring to the monarchy and the name of the British Empire, which is a monument of exploitation and conquest.

Benjamin Zephaniah, the celebrated black British poet, was similarly strident in 2003 when he referred to why he turned down a British Honour offered by war criminal PM Tony Blair:

"My obsession is about the future and the political rights of all people. Benjamin Zephaniah OBE - no way Mr Blair, no way Mrs Queen. I am profoundly anti-Empire"

Those excellent sentiments were echoed in December 2016 when the eminent Professor of Criminology, Phil Scraton, who had worked so hard over many years to seek justice for the Hillsborough disaster victims and families who had been besmirched, deceived, lied about and ignored by Thatcher and successive governments and the mainstream media before finally securing a proper public enquiry and some justice against the wishes of the British Establishment:

"I could not receive an honour on the recommendation of those who remained unresponsive to the determined efforts of bereaved families and survivors to secure truth and justice."

“These awards are made without recognising ties to an imperialist history or its legacy. I could not accept an honour tied in name to the ‘British Empire’. In my scholarship and teaching I remain a strong critic of the historical, cultural and political contexts of imperialism and their international legacy”.

Anyone who wishes to retain their integrity and credibility should think long and hard before accepting a British ‘Honour’ or House of Lords robe. The sooner the Honours system is scrapped and the House of Lords is abolished the better for society as a whole and democracy specifically.

Views and opinions expressed in this article are those of Tommy Sheridan and do not necessarily reflect those of Sputnik.