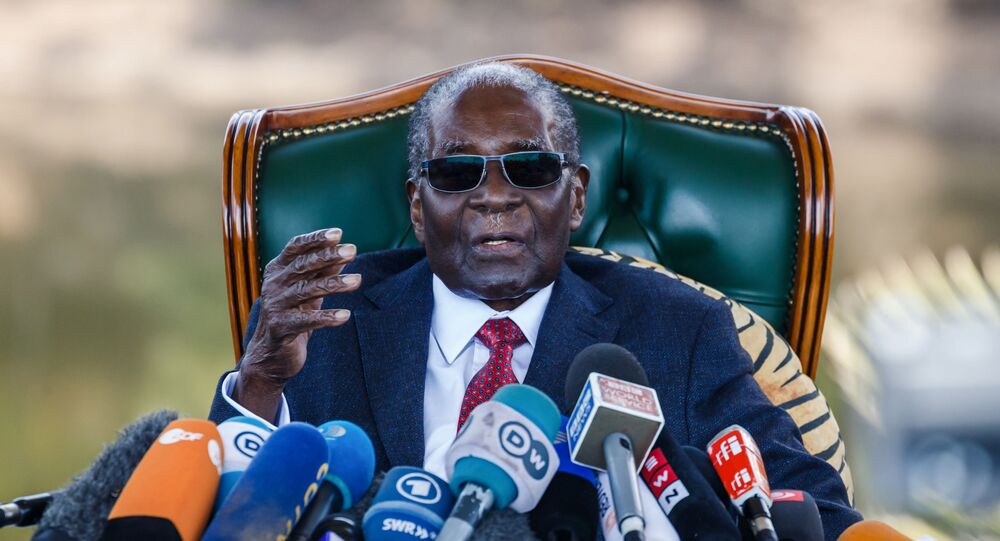 Robert Mugabe, the man who ruled Zimbabwe for 37 years following its independence from the UK - independence which he himself fought for as a guerilla leader, has died in a Singapore hospital at the age of 95.

Hailed by many as a great liberator, and an outspoken and fearless advocate of African rights against the predations of western imperialism, he was also reviled by others as a corrupt dictator who presided over the economic collapse of his once prosperous nation.

Where does the truth lie?

In 2014 I visited Zimbabwe, the first time I had been to Southern Africa. I was following in the footsteps of the Boer War reporter and prolific novelist Edgar Wallace, whose biography I had written.

We entered Zimbabwe by train, from Botswana. I was excited about seeing for myself a country about which the mainstream coverage had been so negative.

When daylight broke we made our first stop, near a rural settlement of traditional mud and thatch huts. Lots of little children, and some older ones- and a man I presume was a teacher or village elder- ran out to greet us. We were told earlier that the children greatly appreciated pens and pencils and little bars of chocolate as times were really hard. I remember the delighted faces of the children as the passengers gave generously.

Our first stop in Zimbabwe was at the amazing Hwange National Park - a wildlife sanctuary almost the size of Belgium. It was there, on a game drive, that we ‘met’ the later very famous, but tragically ill-fated Cecil the Lion. ‘We drew right up close to the animal, who was lying on a large termite mound. We could not believe just how close we were able to get to him. The gentle nature of Cecil, a popular favourite with tourists, who was quite happy to sit there and pose for photographs, makes his killing all the more despicable’ , I later wrote.

The fact that Mugabe’s Zimbabwe still allowed big game hunters from the US and other ‘imperialist’ countries to pay for permits to kill its wonderful lions (albeit outside of national parks) is surely something to be put in the debit side of the equation when we come to do the adding up. A total of 49 lion ‘trophies’ were exported from Zimbabwe in 2013.

What are my other memories of Zimbabwe? First and foremost the friendliness and helpfulness of the people. There was a very anxious day at the end of our stay when my wife suddenly became very ill with a terrible headache and raging fever. We suspected malaria, and a type that can cause swift death. I remember a staff member of the hotel coming up to me as I stood outside, clearly agitated. She asked if I was ok and I told her I was very worried. She could not have been more sympathetic and reassuring. My wife was taken to a nearby health clinic for emergency blood tests and to our relief it was not malaria. After being prescribed medication, within one day she was well enough to travel. The medical staff were excellent.

Another thing I remember is picking up the newspaper in our hotel and reading very fierce criticism of the Zimbabwean government, Mugabe himself and official corruption. It wasn’t what one would normally expect in a country routinely styled a ‘dictatorship’. On the television programmes I watched I must say there were frank and honest debates about the country’s problems.

Another memory- and it’s a nice one-is seeing all the families dressed up in their Sunday best to go to church. The only ever time I have witnessed such Sunday finery was in the deep south of the United States. And here’s the paradox, or is it really a paradox? Robert Mugabe was a Marxist. He was celebrated by much of the western left (and liberals too), in the 1970s and 80s as the man who helped defeat- and in fact did more than arguably anyone else to defeat racially-prejudiced and discriminatory undemocratic white-minority rule.

Yet ironically Mugabe’s Zimbabwe was an old-fashioned country where conservatives, who look back nostalgically to the 1950s, would have felt at home. A place where children wore smart school uniforms. Where Christmas was still a religious festival. Mugabe himself was the most socially-conservative Marxist you could imagine. Nearly always immaculately dressed, his tastes were definitely old school: ‘Cricket civilises people and creates good gentlemen. I want everyone to play cricket in Zimbabwe; I want ours to be a nation of gentlemen.' he once said. There is a wonderful story about the organisation of the big ‘handover’ independence celebrations in 1980. Bob Marley was booked for the music. Mugabe would have preferred Cliff Richard. He was also a big fan of the American country music singer ‘Gentleman’ Jim Reeves.

There was of course, a less savoury side to Mugabe’s social conservatism, namely his oft-voiced anti-gay prejudices, which of course can’t be condoned.

There was also a ‘back to the Fifties’ feel when we left Zimbabwe. At the Victoria Falls airport we were told simply to leave our luggage on the floor of the terminal and it would be taken on to our plane (flying to Zambia and then South Africa), later. A member of our party was quite concerned about this, but we took a ‘whatever will be, will be’ laid-back Zimbabwean attitude. Our luggage was loaded and arrived safely. There were no tannoy announcements in the departure lounge, a man by the doors simply shouted out that our plane had arrived and we walked with him across the runway.

Visiting Zimbabwe was quite an adventure, but of course going to the country as a tourist is not the same as living there. There’s no doubt that certainly for most of the second-half of Mugabe’s time in power, the economy declined rapidly. Whether we blame Mugabe and the ruling Zanu-PF for mismanagement and corruption, global economic factors, the conditions imposed by the IMF and other international lenders, the devastating impact of HIV/Aids, (later) western sanctions, natural disasters, or a combination of all the above (which is probably the fairest line to take), we can’t deny the reality. In November 2008 inflation in the country reached a mind-boggling 89.7 sextillion percent. The World Bank calculated that between 2000 and 2008 poverty rates increased to more than 72%.

When I visited the situation in the country seemed to be improving, with Chinese investment coming in. Yet since 2015, and even after the military coup that ‘persuaded’ Mugabe to step down in November 2017, there’s been further regression. A severe drought most certainly hasn’t helped matters. The Guardian reported in July that 7m people are threatened with hunger.

Zimbabweans today will be coming to their own verdicts on Robert Mugabe and many I’m sure will have mixed feelings. Whether we take a predominantly negative view, or that there was good and bad in various proportions, we can’t deny that he was an important historical figure.