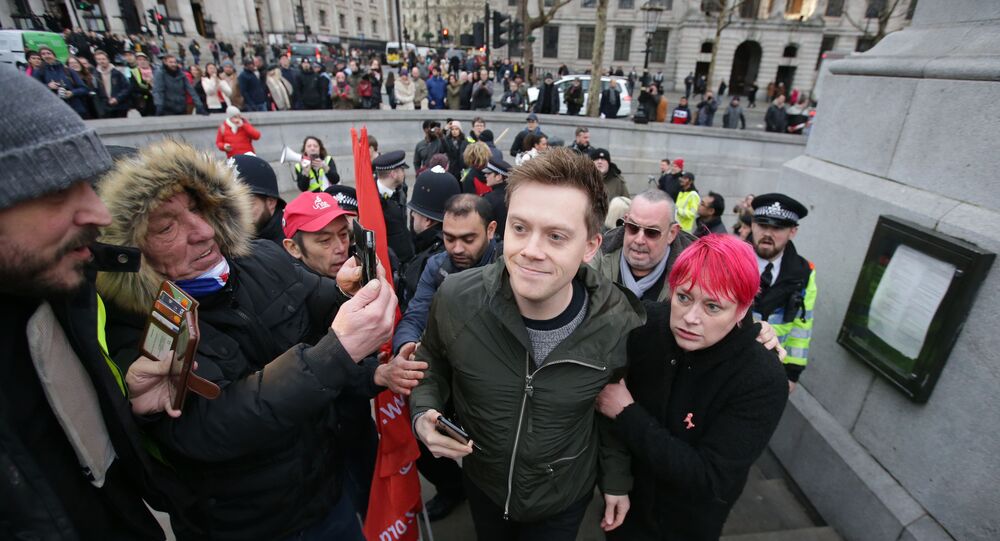 Let’s get something straight: I cannot stand Owen Jones. I hate his sixth form politics. I despise his arrogance. I think he is an agitator. He condones violence against what he terms as Nazis, i.e. Farage and any Brexiteer.

He is always on the TV as the voice of the working class but mummy and daddy had middle-class careers. I hated his petulant walking off a TV show when it wasn’t going his way.

HOWEVER, I do not condone him getting a bit of a kick in as he left a pub this weekend.

HOWEVER, I do not condone him and the likes of Polly Toynbee exploiting this attack as a Far-Right attack on a journalist and an attack on Free speech without supplying any evidence.

We were told only a few days ago not to jump to conclusions about the men who were arrested at a traveller’s camp in relation to the murder of PC Harper and rightly so. We all know what that code, means don’t we?

But how come little Owen and his substitute granny, Polly Toynbee, no doubt from the chaise long in her second home in Tuscany, can tweet garbage like this, “The physical attack on Owen Jones is a shameful and terrifying harbinger of the Brexit world of hate, intimidation, and scapegoating, egged on by an undemocratic, unelected Prime Minister calling opponents "terrible collaborators".

This is hysterical in every sense of the word.

But she is not alone as Comrade Corbyn has jumped in and tweeted, “I send my solidarity to Owen Jones and his friends who were attacked last night. Owen believes it was politically motivated, and we know the far-right is on the march in our country. An attack on a journalist is an attack on free speech and our fundamental values”.

Where is the normal caution from the bleeding hearts to wait and see? Not jump to conclusions, sing Kumbaya and change our twitter avatars to a picture of cry baby Owen.

Yes, it is not nice to be subject to a violent attack but, please, Owen’s injuries look like his cat has scratched him.

As one wag on Twitter said, “they were so bad he could only appear on Sky News and BBC news and give interviews to the Mirror, Express, Sun, Star and the Guardian he hopes to speak to others when he recovers from his ordeal and thanks all lefties for support”.

Harsh, but fairly accurate in my opinion.

When asked if the yobs who attacked him had said anything he replied that he didn’t know as he was being kicked in the head at the time?!

However, from his vantage point lying on the street, he could ascertain and has now been giving a platform in all of the MSM to declare that this was a Far-Right attack, how does he know?

In the Independent, he says that there is other evidence now coming to light that he cannot talk about yet? Really how convenient. We wait with bated breath.

When he says Far-Right, of course, what he actually means is that his attackers were white and probably working class.

Police are appealing for witnesses and studying CCTV and I hope that they catch the culprits but, Owen, I wouldn’t hold your breath mate as we are talking about Sadiq’s stab city here.

Owen though is never one to miss a media opportunity and the BBC have been giving him free reign on every publicly funded broadcast platform they have. Allowing Owen to state, I’m a white guy with a media platform. There are people out there - members of minorities in particular - who are being targeted and physically attacked. There is an increasingly violent far-right in British society and abroad.

Refresh my memory but is this the same Owen Jones who defends milk shaking, Antifa thugs and the violent harassing of Farage and his family whilst eating Sunday lunch in a pub?

Yesterday on Twitter ‘our hero’ declared, “To the comments telling me to take time off: I know it comes from a good place, but I’m not cancelling my work commitments because of these thugs. Straight back to work, same routine. I’m not rattled, and I’m going to very publicly show that”.

Good on you Owen, let your mum dry your eyes with her apron, put on that Elastoplast and get back out there and fight to destroy the will of the people over Brexit. You are truly a British hero. Perhaps you should lead our new Government of National Unity?!

You clearly have the support of the MSM, the BBC and Sky News and most of the political elite who have been quick to show ‘solidarity’ with you.

Yes, these same people who laughed at Nigel Farage’s assault and turned a blind eye to the violence, harassment and abuse of the Antifa hate mob love you.

Let’s be clear, violence has no part to play anywhere in British politics. However, the stinking hypocrisy and solidarity with little Owen this weekend clearly illustrates that there is no level playing field in our politics today.

The attack on Owen Jones cannot be condoned but the speed at which he and the left have turned this into political point-scoring is sad and more dangerous.

At this point, there is NO evidence to suggest that he was attacked by a right-winger, let alone the Far-Right, and broadcast platforms should remember that they’re meant to report facts not opinions.

When you compare the level of anger within the Elite over this scrap in the street on one of their own to the reaction to the industrial rape of young girls that so many on the left turned a blind eye to you really see the hypocrisy of the chattering classes and just how far removed they are from the real world the rest of us live in.

The streets have been ceded to the thugs of all political persuasions but when Boris wants more cops and more stop and search, these same bleeding hearts bleat for Britain about human rights.

When we on the right call for tougher sentencing we are seen as the barbarians.

When we want the police armed we are condemned as populists.

When we condemn Sadiq Khan for turning London into a Third world sh*thole we are described as alarmists.

And when we say and vote to have our country back we are of course condemned as thick, uneducated, manipulated racist knuckle draggers who didn’t know what we were voting for!

So, in a spirit of solidarity with Owen Jones, I have sent him an Elastoplast, two paracetamols and a banana milk shake (like the one he laughed about getting thrown over Farage) and I wish him a speedy recovery from his terrible ordeal.