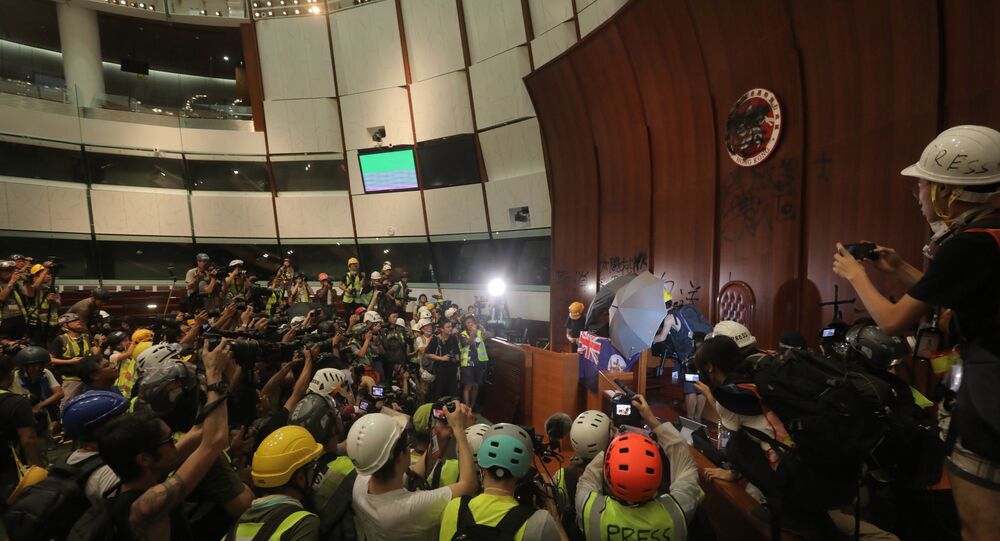 Hong Kong Protests: Let's Break With the Binary - and the Hypocrisy

The 22nd anniversary of Hong Kong's handover from Britain to China has been marked with anti-government demonstrations and a crackdown on protestors. The protestors' grievances shouldn't be brushed off, but UK government's stance smacks of hypocrisy.

Binary thinking is a scourge of our time and we've seen it on display again in reaction to the large-scale protests in Hong Kong. Those who take a broadly anti-China line blame everything on the authorities, turning a blind eye to the fact that the protestors using metal trolleys to partially occupy Parliament buildings in Washington or London would have been dealt with extremely harshly in the US and UK. In fact they wouldn't have been allowed to get close enough to the buildings to occupy them.

By the same measure those who take a broadly pro-Beijing line often fail to acknowledge that the protestors may have legitimate grievances, and that not every citizen of Hong Kong who thinks life was better there before July 2nd 1997 is an imperialist stooge or an agent of the Brits.

I visited Hong Kong for the first time in November 1997, just four months after the handover. I was extremely impressed. Public transportation and infrastructure was excellent. Educational standards appeared very high. Hong Kong was safe, and looked very well-run, better run than Britain in fact! People who I spoke to said they hoped the Chinese authorities wouldn't change things too much.

© AP Photo / Vincent Yu
Police block the road ahead of a march by protesters in Hong Kong on Sunday, July 7, 2019.

Was pre-handover Hong Kong democratic? Hardly. Chris Patten, the last Governor-General, like all the rest, was appointed from London, and not elected by the Hong Kong people. My copy of Whitaker's Almanac 1969, published just two years after the anti-government riots in the Crown Colony which led to almost 2000 arrests, includes the names of the 'Government of Hong Kong' . There's just one Chinese name among them.

So you can understand why the Chinese take umbrage when British political figures like Jeremy Hunt, Foreign Secretary, (or is that Jeremy Fox-Hunt?), tries to give Beijing lectures on 'democracy'.

That does not mean though, that the protestors in Hong Kong don't have any reasons to be taking to the streets, or that the nostalgia of some for the days of British rule is just plain barmy. The proposed 'Fugitives Bill', now pronounced 'dead' by HK Chief Executive Carrie Lam, would have allowed the extradition of Hong Kong citizens not only to China but other countries too. Many were worried it would impact adversely on Hong Kong's judicial independence enshrined in the 'One Country, Two Systems framework' agreed in relation to the '97 handover.

But again, you've got to see the side of the Hong Kong authorities too. The bill was introduced after a 19-year-old Hong Kong man admitted murdering his pregnant girlfriend in Taiwan, before fleeing back to Hong Kong. Surely it's wrong that he can't be extradited, especially as certain safeguards were proposed in the bill?

© AFP 2020 / ANTHONY WALLACE
Protesters break into the government headquarters in Hong Kong on July 1, 2019, on the 22nd anniversary of the city's handover from Britain to China

The protestors' demands have now been broadened to include calls for greater democracy. Even pro-Beijing voices in the former Crown Colony have acknowledged this would be desirable. The New York Times cites the example of Jasper Tsang, a former president of the Legislative Council, who said: “One of the main reasons there is so much anger is that the Hong Kong people, especially the youth, haven’t been given any hope for universal suffrage.”

What might make China wary of making concessions though is that there is a lobby in the west that is clearly gunning for it.

No one doubts that the neocons, having successfully got Russia sanctioned, now want measures taken against Beijing and see the disturbances in Hong Kong as a great opportunity to achieve this. Arch neocon Bill Kristol, a leading advocate for the Iraq War, spelled the aim out clearly in a tweet in November last year: Shouldn't an important US foreign policy goal of the next couple of decades be regime change in China? The UK Henry Jackson Society recently produced a paper on Hong Kong entitled 'The Steady Erosion of Freedom'. There have also been calls for Britain to 'reconsider the relationship with Beijing'.

But the problems of Hong Kong's exact relationship to the rest of China and the issue of democratising reforms, can only be solved if binary thinking and geopolitical agendas are jettisoned. Constructive cross-party dialogue, (without preconditions) and not diatribes is what's needed. The people of Hong Kong should not be regarded as pawns in anyone's 'greater game'.