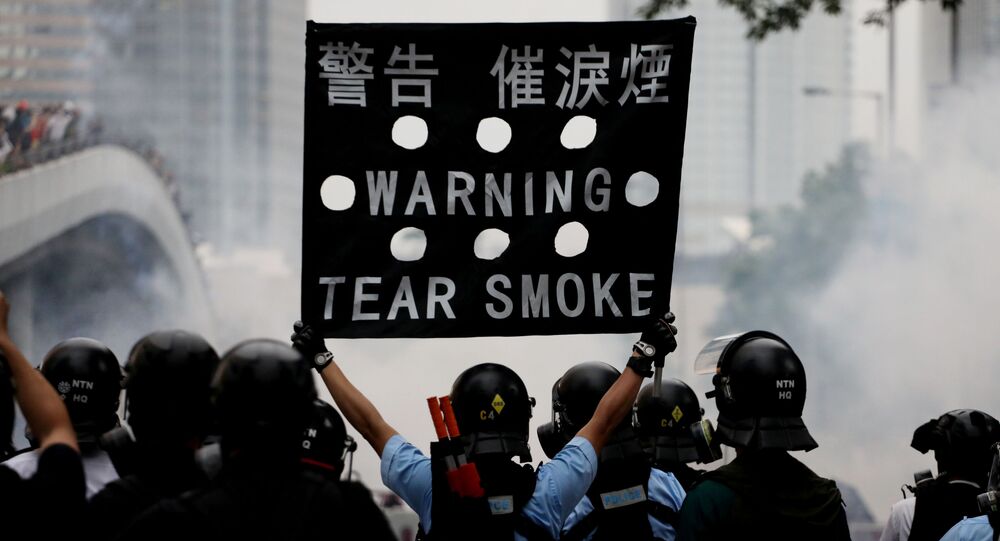 Britain’s Foreign Secretary Jeremy Hunt has warned China of “consequences” over its handling of violent protests in Hong Kong.

Hunt has not ruled out slapping sanctions on the Chinese government, according to BBC reporting.

Other Conservative politicians like former Tory party chairman Chris Patten have also weighed in to rebuke China and to praise the protesters. While these politicians say they "condemn all violence" it is nevertheless clear that they are giving at least tacit encouragement to civil unrest in Hong Kong.

For its part, China angrily hit back this week with a warning to Britain to "stop interfering" in its internal affairs.

The latest spat between the United Kingdom and China flared up after protesters trashed the parliament building in Hong Kong in scenes of rampant anarchy. Windows were smashed and walls graffitied as protesters ran amok throughout the legislative council building last Monday. Colonial-era British flags were strewn over the chamber.

Hong Kong has been China’s sovereign territory for the past 22 years after Britain returned its former colony to Beijing’s control from a negotiated deal implemented in 1997. That was after nearly 150 years of British colonial rule over the tiny enclave on China’s southeast coast.

© AFP 2021 / VIVEK PRAKASH
Protesters tie the British colonial flag to the parliament podium after they broke into the government headquarters in Hong Kong on July 1, 2019, on the 22nd anniversary of the city's handover from Britain to China.

Why Britain should ever had possession of Chinese territory is of course a moot point. The omission of that topic in British political discourse illustrates the innate arrogance that lies behind the latest war of words with Bejing.

The fact is that Hong Kong is now under Beijing’s sovereign control, albeit with a degree of local autonomy as per the terms of the handover accord negotiated with London. The so-called “one country, two systems” arrangement expires in the coming years when Hong Kong will became fully integrated under Chinese laws with the rest of mainland China. Presently, however, it is still officially Chinese sovereign territory.

Therefore British officials like Jeremy Hunt and others have no business in lecturing China on how to manage a security problem caused by protesters smashing up government property.

Hong Kong has been in turmoil from weeks of massive public demonstrations against proposed laws that would allow crime suspects to be extradited to mainland China in order to face trial. Protesters in Hong Kong say that move would violate their local autonomy. The authorities have since shelved the proposed legislation, but the protests have continued, and took a dramatic twist with the violent occupation of the parliament building earlier this week.

The Beijing-backed administration in Hong Kong has the legal right and duty to bring those involved in criminal damage to justice. The morass was tantamount to violent sedition, which British politicians appear to be condoning.

China’s ambassador to the United Kingdom, Liu Xiaoming, put the British arrogance in perspective when he reminded that during 156 years of British colonial rule the people of Hong Kong had neither the right to protest nor an elected legislature, nor an independent judiciary. The territory was formerly under executive control from London with no local democratic rights whatsoever.

For British officials to now pontificate to Beijing about "democratic rights" in Hong Kong is just laughable. It illustrates the utter conceit and hypocrisy of Britain’s government on this matter.

For Hunt to warn China of "consequences" and "sanctions" also shows a delusional sense about British global power.

What is going on here no doubt partially stems from Hunt’s personal ambition to become the next British prime minister. Trying to sound "authoritative" and "tough" compared with rival leadership candidate Boris Johnson, Hunt is risking damaging bilateral relations with China with his poking into Hong Kong affairs.

In a post-Brexit world, Britain will need every trading partner it can muster when it leaves the European Union after more than four decades of EU membership. There are credible warnings that the British economy will suffer from a severe downturn once it quits the bloc unless it finds alternative global markets.

China’s economic colossus could thus be a vital lifeline for British international business in the future. The country is already a huge market for British exports even before Brexit has happened. The way that British politicians like Hunt and others have soured bilateral relations over their pesky comments concerning Hong Kong could come back to bite them. It is unlikely that China will forget about the British insults to its sovereign authority when the Brits come appealing for trade deals in the future.

British interference in China’s internal affairs over Hong Kong is not only supremely arrogant. It is downright stupid. But that’s the thing about arrogance; stupidity can’t be avoided, even when it is glaringly obvious.