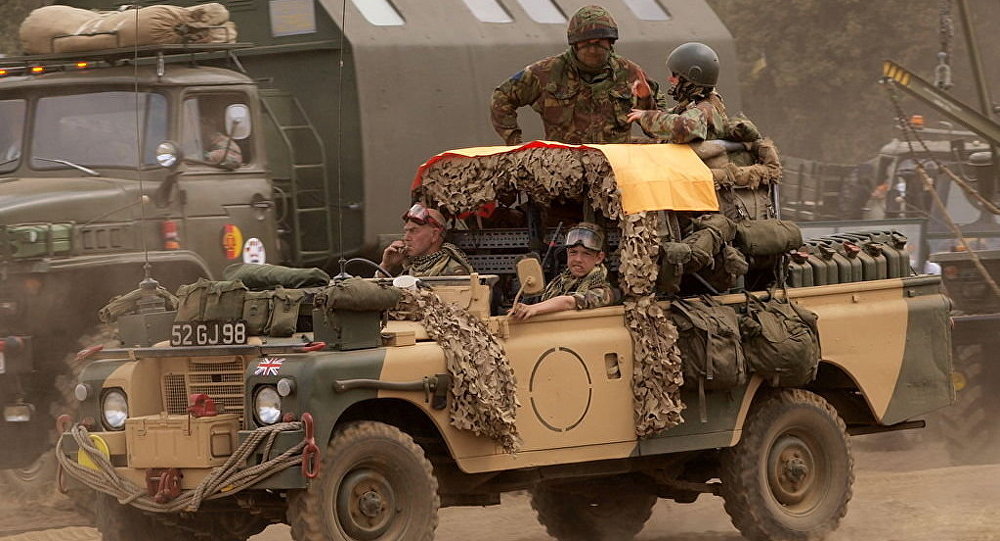 British media have reported that small teams of Britain’s elite commandoes are being deployed on UK-registered oil tankers in the Persian Gulf by way of protecting these vessels.

There's something fishy about the reports, if they are indeed accurate and not some form of British intelligence disinformation.

We are told by The Sun that two Special Boat Service (SBS) squads have been flown to the Middle East in order to deploy on commercial ships entering the Persian Gulf via the Strait of Hormuz. The SBS is a naval counterpart of Britain's elite paratrooper SAS regiment. They are both trained to work in top-secret missions.

© REUTERS / Mass Communication Specialist 1st Class Brian M. Wilbur/U.S. Navy
EU Needs to Take More Active Role Against US Foreign Policy in Iran - Journo
The reported deployment of these elite British forces comes at a time of escalating tensions in the Gulf between the United States and Iran. US allies Saudi Arabia and the other oil-exporting monarchy, the United Arab Emirates, are calling for stepped up defenses to counter alleged aggression from Iran.

Last week, four oil tankers were apparently sabotaged near the UAE port of Fujairah. There have also been reports of drone attacks on Saudi oil pumping stations from Houthi rebels based in Yemen. The finger of suspicion has been pointed at Iran for being behind these acts of sabotage, even though Tehran vehemently denied any involvement and has in fact warned of "malicious conspiracies" to incite a war.

US politicians have lately ramped up the hostile rhetoric against Iran. President Donald Trump raged at the weekend that if "Iran threatens the US" it would be the "official end" of the Islamic Republic. War hawks like Republican Senator Tom Cotton told Fox News that if a war was to erupt the US should defeat Iran with just two strikes, "the first one and the last one". Another hawkish voice, that of Senator Lindsey Graham, called for the US to use "overwhelming force" if American interests are harmed.

The unhinged hyperbole out of Washington of inflicting mass destruction against Iran sounds ominous. It is also criminally reckless aggression which violates international law and the UN Charter.

That's why the international public must be acutely vigilant of "false flag" attacks being staged, aimed at giving the impression that Iran is targeting the vital interests of the US or its allies. Iran has repeatedly said that it has no interest in going to war with the US. It is not in Iranian interests to plunge their country into catastrophic conflict, although Tehran has warned that if it is attacked it will respond with formidable defenses, as well as shutting down the global oil economy by blocking the narrow Strait of Hormuz.

© AFP 2019 / MOD
UK Special Forces ‘Joining US Strike Force’ in Gulf Amid Iran Tension - Report
The deployment of British commandoes in "top secret" missions at this crucial juncture raises perplexing questions. It comes just as British Foreign Secretary Jeremy Hunt warned Iran to not antagonize Washington from what he called "destabilizing activities". "I would say to the Iranians: do not underestimate the resolve on the US side," said Hunt with weasel words.

First question right off is: how are individual British soldiers assigned to huge oil tankers supposed to afford protection to those ships? Iran is known to have an arsenal of lethal anti-ship missiles which it can launch from its coastline. So how are a few squaddies — regardless of their supposed elite status — meant to fend off incoming ballistic missiles, if the Iranians decided to go to war?

The British commandoes are then, according to sketchy media reports, to be airlifted off the oil tankers by naval helicopters and redeployed on the southern side of the Persian Gulf, possibly in Oman or the UAE where Britain maintains colonial-era military bases.

Indeed, the whole escapade sounds very dodgy, like a rejected script for a cheesy James Bond movie. The ostensible purpose of protecting commercial ships can be dismissed as implausible given the circumstances of puny manning and anti-missile equipment.

That raises the more sinister question about what exactly these British commandoes are really up to? Like all special forces, their expertise is in dirty tricks and clandestine operations. It would seem far more plausible that they are being used to set up false-flag provocations which can be conveniently blamed on Iran and thereby provide a pretext for all-out aggression against Tehran.

President Trump may not personally want war with Iran. He certainly despises the Iranian leadership, but at the same time says he wants to engage in future diplomatic talks to resolve animosities. However, many other politicians and military hawks in Washington have no such qualms about attacking Iran.

Hawks like national security adviser John Bolton have openly called for bombing Iran to force regime change. Presumably, Bolton and others have never forgiven the Iranians for kicking out the US-backed puppet dictatorship of the Shah 40 years ago.

Iran's sordid history of British and American oil exploitation, and the CIA/MI6 orchestrated coup in 1953 which was a textbook case of false flags and dirty tricks ushering in the brutally oppressive Shah regime until it was overthrown in 1979 by the Iranian people, clearly demonstrates that Britain is the "go-to accomplice" for US imperialist war in the Middle East.

It would not be at all surprising if British military planners were hatching a devious scheme to trigger war in the Persian Gulf for the benefit of the American military-industrial complex. Sabotaging oil tankers or pumping stations which the dutiful Western news media then uncritically blame on Iran would be as easy as saying, "Jolly good show old chap!".

Trump: 'If Iran Wants to Fight, That Will Be the Official End of Iran' - Really?