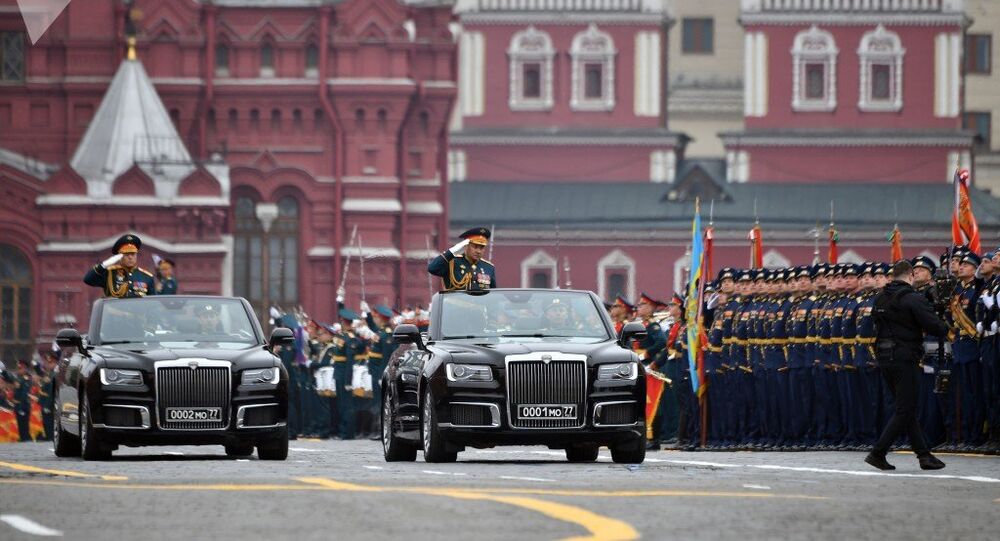 As the world again marked the annual Victory Day against Nazi Germany this week, one thing seems more evident with each passing year – Russia holds the highest honour for celebrating this event.

The commemorations in Russia in terms of people numbers and ceremonial splendor far excel similar public events held across Europe and North America. Even though, in theory, those latter countries were allies which defeated Nazi Germany in May 1945.

Why have Victory Day celebrations seem to have become more subdued in Europe and North America with each passing year, while in Russia, 74 years on, the “Great Patriotic War” is remembered and revered with undiminished passion?

Russia’s President Vladimir Putin delivered a rousing speech dedicated to the sacrifices of the war dead in front of multitudes attending Moscow’s Red Square. There was also an impressive military parade honoring the fallen heroes, followed by a breathtaking fireworks display, and marches held across all Russia in towns and villages for the “Immortal Regiments”.

Meanwhile, tellingly, an article posted on the BBC website was headlined: “What is VE [Victory in Europe] Day?”

© Photo : Host photo agency
March of the Immortal Regiment in Moscow (VIDEO)
One reason for the difference is because Russia and other Soviet nations paid a far greater human price of suffering in the defeat of Nazi Germany. The memory of the horror is seared into Russian families. And, likewise, so too is the memory of resistance and ultimately the glory of defeating a monstrous enemy – at times against all the odds of victory.

Take the Nazi siege of Leningrad (St Petersburg). For over two years the people of that city endured starvation and cruelties that hardly anyone in Western Europe or North America could imagine. Yet the Nazi barbarity was finally overcome, the city was liberated by the Red Army, and Russian composer Dmitri Shostakovich who was trapped in the besieged city wrote an internationally renowned symphony heralding the vanquishing of that trauma.

The later final defeat of Nazi Germany in May 1945 was indeed a liberation for all of Europe. But that victory was indisputably due to the resilience and fortitude of Russian and other Soviet citizens. All told, the Soviet people lost about 27 million from Nazi war depredations, including from extermination operations and atrocities inflicted on whole villages. That number is incomparably greater to what other European countries incurred. Yet, in spite of the massive onslaught, it was the Soviet people who rose to the occasion to push back the Nazi invaders all the way to Berlin where the Third Reich was eventually buried in its war bunkers.

Just one more figure is enough to tell the story. Some 90 per cent of all Nazi army casualties during World War II were inflicted in the East fighting against the Soviet nations. That tells you how and where the Nazi war machine was terminated.

There are several current consequences from that horrific war that are still felt today.

One is that Russia will never allow itself to be invaded and threatened as it was by Nazi Germany in June 1941. Russia’s defense forces and weapons are perhaps the best in the world. No wonder Russia is vehemently opposed to NATO expansionism. How would Americans or British feel if the shoe was on the other foot?

© Sputnik /
Ura! London Immortal Regiment Holds 4th Annual Victory Day March in UK Capital
Secondly, in a paradoxical way, because Russia suffered such infernal hardships from war, it is perhaps the most peace-loving of all modern nations. In President Putin’s speech this year, he once again extended a hand of friendship and cooperation to others to strengthen global security. That is in spite of the fact that the US and its NATO allies have continually insulted and provoked Russia with slanderous claims, military saber-rattling and economic sanctions.

A third consequence is that Western nations who claim to have defeated Nazi Germany – thereby trying to undermine Russia’s honorable place in that event – have at the same time an evident historical amnesia. This is not to belittle the sacrifices of hundreds of thousands of ordinary soldiers from the US and Britain who gave their lives in the fight against Nazi Germany. Nevertheless, the boastful claims of Western leaders and media is belied by the diminishing memorials to the Victory in Europe.

The truth is Victory in Europe was predominantly a victory by the Russian and Soviet nations. After all, several of the European countries are guilty from their ruling establishments collaborating with Nazi Germany, as in France, Norway, Poland, and others.

The concomitant of that duplicitous reality is that victory celebrations across Europe – except for Russia – tend to become somewhat hollow and muted with time.

Another reality – one that is shameful and concealed by Western establishments – is that American and British finance capital was very much instrumental in bankrolling the rise of Hitler’s Third Reich. US corporations such as Ford, ITT, General Motors and Du Pont made fortunes from investing in Nazi Germany during the 1930s, making full use of slave camps for cheap labor, before the outbreak of the war.

© Sputnik / Alexandr Vilf
Russia's Victory Day Celebrated in New Delhi, Tributes Paid to India's Fallen
The ambiguous relationship between Western capitalism and Nazi fascism is testified in today’s cozy alliance between Washington and the Neo-Nazi regime that seized power in Ukraine. The disgusting veneration by politicians in Kiev for Nazi collaborators and their vile blood lust against the ethnic Russian people in Eastern Ukraine are never objected to by governments in Washington or the European Union.

Russia knows the evils of fascism because it stared this force in the face and defeated it 74 years ago. That world-changing event will never be forgotten nor taken for granted.

The Western countries – who by contrast did comparatively little to defeat Nazi Germany – are the same ones today who feel entitled to wage covert and overt wars for regime change around the world. One may argue, therefore, that the battle against fascism has never ended. Nazi uniforms, soldiers, guns and tanks may have been buried, but the mentality of aggression, superiority, lawlessness and impunity is very much alive. Thankfully, however, Russian vigilance and courage is also alive today.