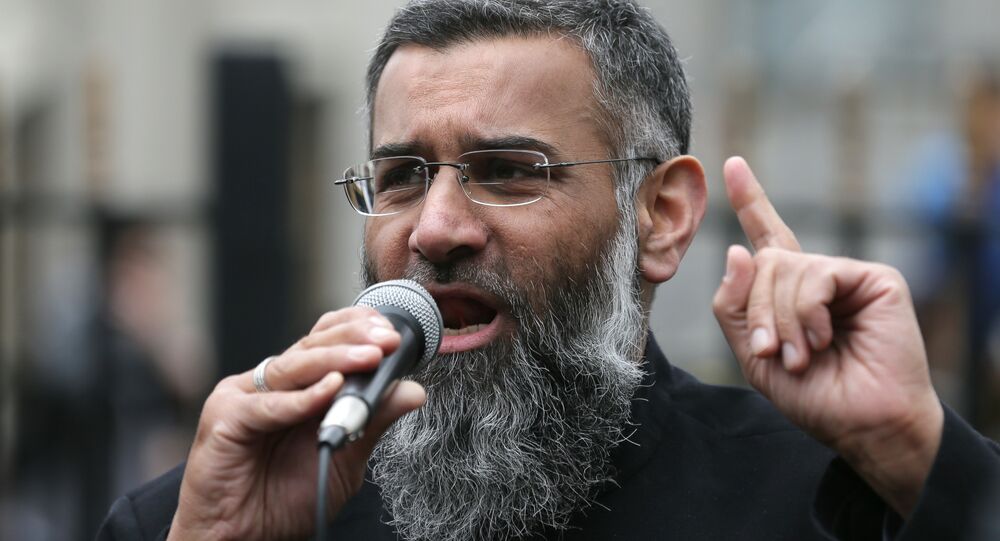 Anjem Choudary Should Not Be Free

The fact that our weak-willed liberal elite have allowed over 450 battle hardened “homegrown” Jihadis back into the UK makes my bloody blood boil. But the sight of Anjem Choudary walking free on the streets of London made me want to vomit this weekend.

This smirking freed preacher of hate, Anjem Choudary was photographed looking smug, in his white robes, accessorised as the Daily Mail would say, with an ankle tag on just above his trainers walking to his mosque and the paper shop.

One part of me thought the MSM should not be printing these photos but another part made me think yes, they should because we all need to be reminded that this Government as with all our governments, going back to the ‘War Criminal’ Blair, have failed in their first duty, which is to protect its citizens.

They have been and quite simply continue to be, “soft on terror and soft on the causes of terror” and we all need to realise that they are basically playing a sick game of Russian roulette with all of our lives.

© AP Photo / Tim Ireland
Hate Preacher Anjem Choudary to Take UK's 1st Anti-Extremism Course - Report
In the week that the London Bridge Terror attack inquest opens, the sight of Anjem is a poignant and sick reminder that our political class seem to be more concerned about the rights of the terrorists and traitorous scum who live amongst us than the decent silent majority.

The eight people who were slaughtered on the bridge and in Borough market were given death sentences by these savages and their relatives have been handed down a life sentence of pain and grief.  But ‘hey ho,’ Anjem can walk to the newspaper shop to top up his leccy card and go and have a quick pray at his local mosque, whilst us mugs pay out thousands to keep an eye on this recruiting sergeant for terrorism. Let’s all sing Louis Armstrong’s “What a wonderful world” shall we, or is it Kumbaya again, or “Don’t look back in Anger’?’

If you think I am being too harsh let me tell you that Anjem helped radicalise, via his now banned terror group al-Muhajiroun, the London Bridge attack ringleader Khuram Butt. Not only that, he also radicalised the savages who beheaded British soldier, Lee Rigby on the streets of Woolwich.

© AP Photo / Tim Ireland
UK Could Release Jailed Hate Preacher Anjem Choudary Within 12 Months
Is this a man who should be let out on the streets again, with or without a tag?

The security service and the Government tell us they believe there is sufficient security around him. I hope so and I wonder if any of them will end up in the Dock if he or more likely, as he is a coward, one of his thick acolytes decide to blow himself up on the tube?  No chance!

I know he has served his sentence (sort of) but the sentence was laughable in the first place. Putting aside the fact that I believe any criminal should serve the total sentence and that ten years should mean ten and that life should actually mean life, in terrorist cases that pathetic hand wringing snowflake philosophy should not apply at all. No one in the UK ever voted for this stupid liberal approach.

Many, like me, wonder just why the Establishment and by that, I mean our political class, the Judiciary and of course the leaches of the Human Rights lawyers brigade are just so soft and lenient on those who wish to slaughter us and destroy our very way of life.

When Bangladesh stated that if Jihadi Bride, Shamima Begum came back to their country they would hang her I suspect most right-minded people in the UK thought, ‘good on them, we could do with a bit of that tough approach in Blighty.’ She like the 450 they have already let back in and the 700 or so who are on their way should have lost all their rights (including their human rights and UK passport) the moment they walked up the steps of the EasyJet to Turkey, out of Luton.

But no, what do our soft touch establishment do? They send these vicious savages and the enemy within on rehabilitation courses which are designed to turn them away from their murderous hate, contempt and desire to raise the black flag of Islamic State over Number 10.

This of course has always been Anjem’s express desire along with turning the UK into a Sharia caliphate.

I’ve interviewed Choudary on numerous occasions and described him and indeed Abu Hamza as pantomime terrorists. However, as their links to so many terror atrocities have emerged I have radically changed my opinion; both are out and out enemies of the UK.

So, these deradicalisation Counsellors talk to people like Anjem, and he has been on one of these courses, and listen to his and their “grievances” and then help boost to their “identity, self-esteem, meaning and purpose”.

© REUTERS / Laura Lean/Pool/File Photo
Daesh Bride Shamima Begum Given Legal Aid to Fight for British Citizenship
Even Officer Barraclough, the liberal Prison warden in Porridge, would be aghast at this softly softly approach which of course is all funded by you and I, the mug taxpayer. Oh, and of course, they are also inundated with benefits, as these common purpose graduates try to detoxify them and let them quietly slip back into the British way of life. You seriously could not make this SH*T up could you?

I guess the aim is that they suddenly become model citizens and live the rest of their days in suburbia. An alternative view of course is that they will just play the system as Begum is trying to do with the baby scam.

Think I am being too harsh?  Well, The Sun report that, “In one case, a British-born woman claimed during therapy that she only learned her jihadi husband was taking her to Syria while they were on their ¬honeymoon. She later confessed that she had been fully aware of such plans long before and lied about her own sympathies.”

She will be only the tip of a very large iceberg of terrorist sympathisers playing the system and still wishing to murder us.

According to a Hope Not Hate report this year, they say that the al-Muhajiroun network is “starting to emerge again” with active cells across London.  But our leaders still let out their spiritual leader Anjem?

This is not Russian roulette with only one bullet in a chamber this is like handing them a fully loaded revolver. It is madness.

But hold on before your blood pressure goes completely off the chart, the Daily Telegraph also report that two close associates of Anjem, Mizanur Rahman, who had previously created the group’s secret internet forums, and Abu Izzadeen, its long-standing and imposing enforcer have also been released, and this now “threatens to galvanise acolytes.”

It gets worse though, as the Telegraph continues, “Another senior figure, Richard Dart, who was a poster boy for radical white converts, is also free, having been jailed for attending a terror training camp in Pakistan before his arrest in the run-up to the London Olympics.’

© REUTERS / Danish Siddiqui
Sajid Javid Blames ‘Middle Class Drug Users’ for UK’s Surging Knife Crime
Research for the Telegraph also states that “at least 22 of Choudary’s acolytes have now been released from prison since 2001. A further five were eligible for parole in the past few months – it is not clear if they were released – while another six can apply for parole by the end of the year.”

Are you comfortable with this? Because I am certainly not, which is why I have been calling for a new treason law to be brought in, let’s face it should have happened after 9/11 and certainly after 7/7 but despite all his big words and his eye on becoming the PM Sajid Javid has done sweet FA.

The normal practice of releasing criminals after serving half their sentence needs to be changed and if not, then it certainly should not apply to terrorists. Sentencing for people who are effectively at war with us needs to be much, much harsher.

© REUTERS / Dinuka Liyanawatte
Open Doors UK Spokesperson: Sri Lanka Bombings ‘Clearly an Attack on Christians’
The Establishment and the Political Elite owe this to the victims and families of victims, not only of London Bridge but every other atrocity we have had to suffer in the UK.

In the aftermath of Sri Lanka and Islamic States clear vow to wake sleeper cells across the globe the political class need to stop worrying about rehabilitating terrorists and their human rights and instead focus on the rights, the safety and protection of the people who voted them into power.

I won’t hold my breath!