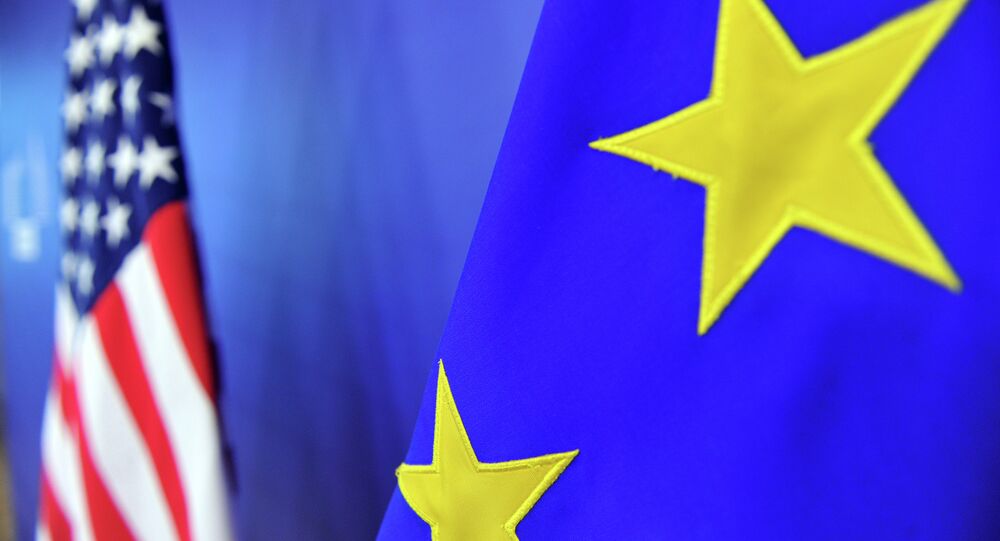 Almost any economist will tell you that fighting several trade wars simultaneously is a bad idea. Any diplomat will tell you that alienating your closest ally is ill-advised. However, the trade hawks in Washington seem to think they can bully both Europe and China at the same time.

On 14 March, commenting on the state of the US-EU trade negotiations, Trump said "they are willing to talk to us and if they don't talk to us, we're going to do something that's going to be pretty severe economically. We're going to tariff a lot of their products."

© CC0
Trade War: 1 Million Lbs of Smuggled Chinese Meat Seized in NJ Amid Swine Plague
In simple terms, Donald Trump reiterated a serious threat he made in the past in order to pressure the EU into various concessions on international trade and defence spending. This bullying tactic has failed so far, and there is a reasonable chance that the US president feels the need to execute his threats. The most likely target for punitive tariffs is the European automotive industry, but for a number of diplomatic and economic reasons, slapping tariffs on a key European export would be ill-advised.

It is easy to understand why the Trump administration is considering starting a full-fledged trade war with Europe. The president's twitter account offers a glimpse into his motives. On March 17 Trump tweeted:

General Motors and the UAW are going to start “talks” in September/October. Why wait, start them now! I want jobs to stay in the U.S.A. and want Lordstown (Ohio), in one of the best economies in our history, opened or sold to a company who will open it up fast! Car companies…..

….are all coming back to the U.S. So is everyone else. We now have the best Economy in the World, the envy of all. Get that big, beautiful plant in Ohio open now. Close a plant in China or Mexico, where you invested so heavily pre-Trump, but not in the U.S.A. Bring jobs home!

The intent is clear: Trump wants to "make America an industrial powerhouse again", providing meaningful job opportunities for the members of his electoral base. However, the President is wrong on couple of counts and he seems to chose wrong solutions for the right problems. The US economy is not "booming": according to the latest forecast published by the Federal Reserve Bank of Atlanta, "real GDP growth (seasonally adjusted annual rate) in the first quarter of 2019 is 0.4 percent."

Car sales are falling, not only in America, but across the world, including China. According to Edmunds.com, "February sales plummeted 2.8% to 1.26 million units. The seasonally adjusted annualised sales rate has come down to 16.6 million, the lowest in 18 months."

Of course, if Trump hits European automakers with punitive tariffs, the sales of US-made cars may increase, but the macroeconomic environment will not change. Making European cars prohibitively expensive in the US will definitely help General Motors and Ford, but at the same time such a move by Trump will make European politicians absolutely livid. Bloomberg reports on a study by IFO Center for International Economics, a well known German think-tank: "If the U.S. imposed permanent tariffs of 25 percent, German car exports to the US could fall by almost 50 percent, or about 17 billion euros ($19.2 billion)".

The economic benefits for the US will be insignificant, but the damage inflicted on America's alliances in Europe will be tremendous.

© CC BY 2.0 / United Soybean Board
Trade War Cut US Soybean Exports to China 90% - Top USDA Economist
German Chancellor Angela Merkel and other European leaders used a recent international security conference to voice their anger at Trump's protectionist policies. It cannot be stressed enough that the European Union has a multitude of retaliation options, that go way beyond the usual retaliatory tariffs proposed by the European Commission President Jean-Claude Juncker. China is actively courting Europe with its gargantuan "Belt and Road Initiative" investment.

Moreover, Chairman Xi has just scored a major success in Italy, bring the first G7 country into the "Belt and Road Initiative". Washington is angry, while Brussels is concerned. According to Time Magazine, "China welcomes Italy into its sphere of influence, unnerving the EU and US". Trump's tariffs on European exports may become the last straw that will break the transatlantic relationship and push the European Union into the warm embrace of China. Some trade hawks in Washington seem to believe that the US is so crucial to the world economy that Washington can take on China, Germany, Russia, France and Venezuela simultaneously and still win. That's a bold strategy, but it's unlikely to work.

What happens if the whole European Union defects to China, because China offers money, while Washington is inciting a trade war? Donald Trump once said that "trade wars are good and easy to win", but if China and Europe join forces against the United States, Trump's trade war on two fronts will likely become unwinnable.

The views expressed in this article are those of the author and do not necessarily reflect those of Sputnik.