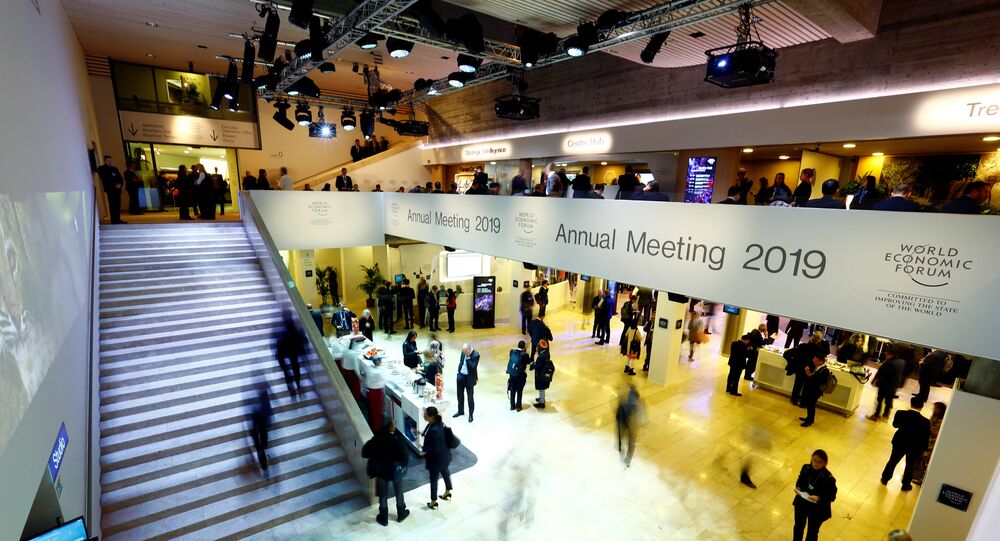 Ex-Chancellor George Osborne, turned editor of a newspaper in charge of Project Fear, plies his trade in Davos, along with Remain funder multi-millionaire Roland Rudd (brother of Secretary of State and arch Remainer, Amber Rudd) and Tony Blair.

We hear on our state broadcaster, the BBC, live from Davos … "we have Tony Blair, George Osborne and Roland Rudd" … of course we do, where else would they be? How do they think this chimes with the ordinary man and woman in the street? They have no idea, because the elite does not listen to them.

While the Yellow Vests in Europe and in France are braving the cold, police rubber bullets, water cannons and tear gas, the global establishment will enjoy the comforts of the luxurious mountain retreat of Davos.

The Yellow Vests represent millions of people in Europe who struggle to make ends meet every month. But that’s not what worries the Davos Man. Their concern is not about the detrimental impact of their own ultra-liberal globalist agenda. Rather, their concern lies more with how to retain their comfortable positions, now that they are threatened by a populist revolt sweeping across the Western World.

Osborne and co. really do not understand why they shouldn’t be at Davos at all. And that’s the problem with the elite.

They do not understand that Davos perfectly encapsulates the distance of politicians in elite locations, all failing to learn the lessons of Brexit, Trump, Italy, Austria, et al. They sit in their chauffeur-driven Maybachs, sipping Champagne in five star hotels, with nothing new to say to the electorates that got rid of most of them.

© AP Photo / Markus Schreiber
System Failure, Davos Dithers
It has never occurred to them that the bankrupt globalist ideology they promote is the main cause of peoples' suffering. Rather they see popular unrest and populist movements as evils that need to be suppressed and eradicated. From their point of view, the people are perhaps not the first to blame; ignorant as they are they can simply be disregarded. But those nasty populists everywhere that stir upheaval and trick people into believing there are alternatives, they are the real enemies and should thus be resisted at all costs.

Yet, in reality by opposing populist movements, globalists are merely tilting at windmills whilst the source of the problems and discontent keeps festering on. Davos Man fails to grasp that populist movements across the Western World are the democratic means of opposing open borders, multiculturalism and economic globalism, all rapidly breaking down their societies.

If it wasn't for populist movements allowing for political readjustment, societies would have come to a standstill already. "Yellow vests" would be out everywhere and in numbers that would dwarf the current movement. Once the people lose the ability to steer their countries and societies in the right direction at the ballot box, it leaves them with only two options: to suffer indefinitely or revolt.

It is thus no surprise that we see France confronted with a massive protest movement, as Macron epitomises the globalist elite and remains deaf to the demands of ordinary people. Macron's victory against the populist monster in France and Europe turned out to be very short-lived. Instead of turning the tide against populism, he only invigorated the anti-globalist and anti-establishment movements.

How different things are in Italy. Here, Lega, with its charismatic leader Matteo Salvini, and the Five Star Movement finally put the interests of the Italian people first. Their support has skyrocketed. There is no massive "Yellow Vests" protest in Italy, because Lega and 5 Star not merely represent the "Yellow Vests", they themselves are the "Yellow Vests".

© AP Photo / Kamil Zihnioglu
French Finance Minister Le Maire: Inequality Poses Main Threat to Capitalism
The above provides a stark warning for how things shall move forward in the UK. Either the UK follows the path taken by Italy with a government sensitive to the people's wishes, or it follows the method of Macron, which implies pushing forward a globalist agenda thus inducing a revolt. If the UK parliament — and the global-establishment somehow manage to overturn the Brexit referendum result, it would be the largest betrayal of the British people (or of any democracy for that matter) in contemporary history. It would, for once and for all, break down any bit of trust left in democracy. I fear it would spark a popular revolt beyond the size of anything we have ever witnessed. The British elites should think twice as they attempt to outsmart the people on Brexit. Preventing Brexit will fling open Pandora's box.

Instead of organising a “Globalisation 4.0” gathering in Davos I would suggest these cossetted elites follow a crash course in Nationalism. For it is about time for them to wrap their heads around the fact that nationalism is a force to stay and not to be opposed.  Nationalism, that is civic nationalism, is not a force to be feared, but embraced.

Nationalism is a healthy and natural drive that will keep in check the ultra-liberal elitist agenda that benefits the few at the expense of the working and middle classes of our societies. In all frankness, I doubt that we could ever bring the Davos Man back to their senses, utterly unhinged as they are. At the end of the day, it doesn't matter really, as they will be an extinct species soon. The Davos Man is dead. People have already started to vote populist leaders into power and the revolution will carry on. Just watch carefully at the next European elections. You'll understand.