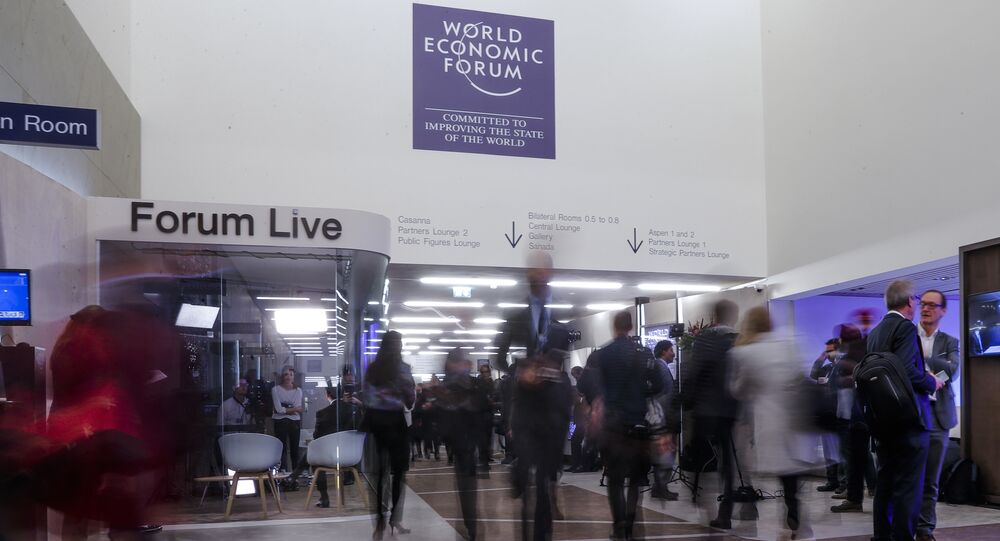 As global business leaders gather this week in the rarefied, snowy mountaintop resort of Davos they’re said to be fretting about how to reinvigorate the international economy.

What these elites should be doing, if they had any genuine interest in solving economic problems, is to spend less time in an exclusive Swiss resort and more time down on the streets and fields where most of humanity struggle to get by.

© AP Photo / Michel Euler
What You Need to Know About World Economic Forum in Davos
It's almost hilarious the poverty of intelligence among the global elites. They wonder why economies are gridlocked, why growth is sluggish, why the outlook looks grim. Yet the answer is staring everyone in the face.

It's the economy, stupid. Specifically, the capitalist economy. New figures reported this week show the inequality between superrich and the mass of ordinary people has reached an even greater scale of obscenity.

The richest 26 individuals in the world are now reckoned to own as much wealth as the poorest half — 3.8 billion people — of humanity combined.

© Sputnik / Aleksey Babushkin
Davos Poll: Public Trust in Nat'l Governments Falls Worldwide
This global inequality is replicated across individual nations, especially those Western nations dedicated to corporate capitalism. The United States and Britain are two of the most unequal countries on earth, with record number of multibillionaires living beside — figuratively speaking — record numbers of individuals and families suffering from poverty.

Check out this recent lecture by American economist Richard Wolff. He explains how capitalism is inevitably fated to result in massive polarization of wealth between a minority rich elite and the vast majority of "have nots". That's how capitalism operates, says Wolff.

Periodically, the mass of people get organized and force governments to restrain the excesses of capitalism, and redistribute the wealth more equitably. That was the case during the 1930s in the US when President Roosevelt launched the New Deal policies under growing pressure from the masses hit by the Great Depression.

But by and large, the system always tends towards polarization of wealth, accumulation of capital among a tiny elite, while the vast majority suffer from poverty, underemployment and deprivation.

© REUTERS / Ruben Sprich
Davos Forum Warns Rife Political Risks Impair Global Economic Outlook
Michael Parenti, another brilliant source on socio-economics, explains that what we refer to as "Western democracy" is something of a myth. Those societies are in practice plutocracies, run by and for the superrich. The function of governments is not to serve the people, but to serve their oligarchic masters.

From the Second World War to the present, the political project has been the steady undermining of whatever vestiges of democracy that may have existed. Government after government in Western states has ensured that more and more of the nations' wealth is siphoned off from the general public into the hands and bank accounts of the superrich and corporations, usually located in some obscure zero-tax haven.

As Parenti expounds in his book, Democracy for the Few, what passes for corporate capitalism in the West is really a system of "corporate welfare". Through a system of tax breaks, subsidies, public sell-offs, and so on, the wealth of nations is expropriated by the elite, aided and abetted by supposedly "democratic" governments.

"Costs are socialized; profits are privatized in an enormous upward redistribution of income from the taxpaying populace to the corporate rich," writes Parenti. "Under corporate-state capitalism ordinary citizens pay twice for most things: first, as taxpayers who provide the subsidies, then as consumers who buy the high-priced commodities and services — if they can afford to."

© AP Photo / Carolyn Kaster
Trump Cancels US Delegation to Davos World Economic Forum - White House
For the United States, figures show that in the 1950s, corporations provided about 50 per cent of the federal government tax revenue. Today, that proportion is down to about only 7 per cent. The tax burden has been shifted on to ordinary workers through their income deductions or through consumer sales taxes.

Even American multibillionaire Warren Buffett noted with a hint of shame that his cleaning lady pays a higher rate of tax on her paltry salary than he does on his dividends and investments. “It’s been a marvelous, marvelous time for the superrich,” Buffett remarked.

Tragically, as government revenues decrease over time due to policies of enriching the elites, then the state is compelled to rack up debts in order to avert collapse. But the debts are then used to siphon off even more money to the wealthy by governments borrowing from private banks and investors, while the spiraling indebtedness is used as an excuse for imposing savage austerity cuts on the majority.

What's going on here is "system failure". When inequality and poverty reach such a phenomenal scale as they have in today's capitalist countries, then economics become defunct. The system drowns in overproduction and surplus because so few can afford to buy things, even basic goods, like food and clothes, housing, education, healthcare.

© AP Photo / Pablo Martinez Monsivais
Treasury Secretary Mnuchin to Head US Delegation at Davos Instead of Trump
The bitter laugh is that the plutocrats and their flunkies are sitting on top of a Swiss mountain this week wondering why the world's economies are in such awful, unworkable shape. It's glaringly obvious that their capitalist system is a failed system.

The most feasible way out of the impasse is for nations to take democratic control of their resources and finances to serve the needs of the vast majority of society for the greater good, as opposed to the private profit interests of a superrich elite.

Socialism is the only way that we can create societies that are fit for purpose to serve human beings and to avert the descent into barbarism that is currently happening.