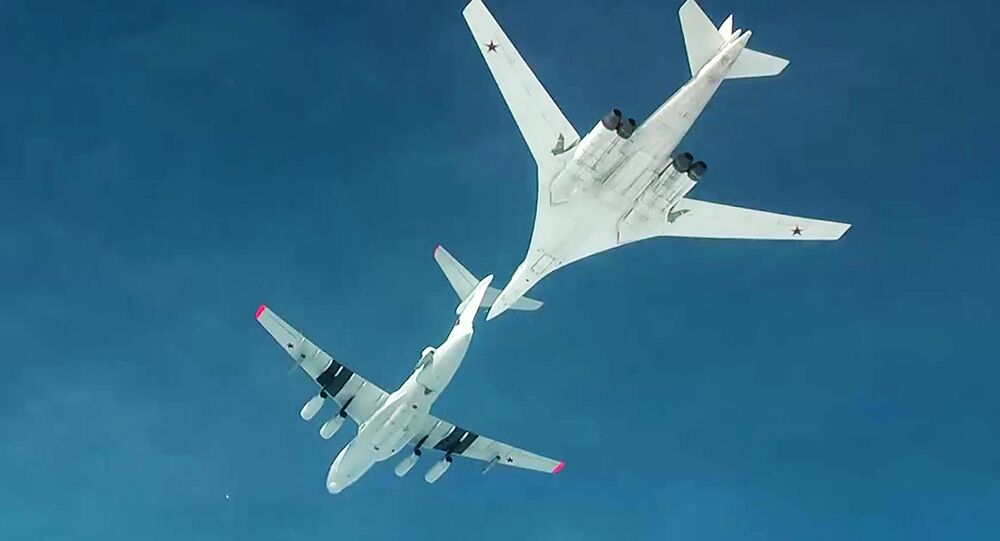 US Meltdown Over TU-160s

Two long-range Russian bombers landed in Venezuela this week and the United States immediately flew into a fit of rage. Top diplomat Mike Pompeo had a virtual mental meltdown on Twitter, denouncing Russia and the South American country for daring to cooperate in holding a military exercise.

The TU-160s flew nearly 10,000 kilometres from Russia to Venezuela on a scheduled non-stop flight in order to demonstrate Moscow's support for the government of President Nicolas Maduro. The week before, Maduro was hosted in Moscow by President Vladimir Putin during which the two leaders discussed closer cooperation in economic and military affairs.

© Sputnik / Vladimir Pesnya
Maduro Says Visits by Foreign Military Aircraft to Continue Amid Tu-160 Arrival
The Venezuelan government has had close ties with Russia over the past two decades since the late socialist leader Hugo Chavez and his successor Maduro have been in power. The South American oil-producing giant has been threatened with US military aggression and sanctions which have caused havoc for its economy. Russia is promising to help stabilize the country with oil and other investments.

Thus, there was nothing improper about the two Russian warplanes flying to Caracas. It wasn't the first time either. Five years ago, the TU-160s reportedly made a similar itinerary.

However, from the way US Secretary of State Mike Pompeo reacted, one might have thought that Russia and Venezuela were hatching a sinister scheme.

"Russia's government has sent bombers halfway around the world to Venezuela," Pompeo fumed, according to Reuters reporting.

He then went on to vent his fury with gratuitously nasty remarks about both countries.

"The Russian and Venezuelan people should see this for what it is: two corrupt governments squandering public funds, and squelching liberty and freedom while their people suffer."

Kremlin spokesman Dmitry Peskov slammed Pompeo's "undiplomatic" language and vacuous reasoning. In an apt counter-dig over the allegation of squandering public funds, Peskov noted that the annual US military spending of over $700 billion (more than 10 times Russia's military budget) could feed the whole of Africa — if it were allocated to such a worthy cause.

Neither is the US in any position to lecture others about "squelching liberty and freedom". Almost every week, American bombs kill countless civilians in Afghanistan, Syria and Yemen, while US troops are present in 150 countries around the world (80 per cent of all nations), with 800 bases in some 70 foreign states.

A reliable study of US wars and clandestine military interventions carried out in some 37 nations around the world during the decades since World War Two estimates the total number of deaths caused among mainly civilian populations at between 20-30 million. Those military onslaughts, such as the Vietnam War (3 million deaths), were declared to be in the name of "freedom" and "democracy" by the "leader of the free world".

Such grotesque falsification of monumental crimes is what you call "propaganda", systemized by Western media who have never told the unvarnished truth about the criminality of Washington and its allies.

Propaganda is what pathetic politicians like Mike Pompeo are full of. You know these American politicians are full of it because of their obtuse double-think.

Pompeo was reacting to Russian bombers flying to Venezuela because that country is considered by US imperialists to be in its "backyard". In truth, the whole planet is considered to be America's backyard when it has 800 military bases around the globe.

The distance between Caracas and Florida is nearly 2,450 kilometres. From the Venezuelan capital to Washington DC it is 3,300 km.

Earlier this year, in July, the US Navy held its biggest NATO exercises in the Black Sea on Russia's southern shores. Participating in those exercises were Ukrainian forces, even though Ukraine is not officially yet a member of NATO and even though the Neo-fascist regime in Kiev has repeatedly uttered crazed anti-Russian statements.

Let's take this double-think to a sublime level. On November 26, the US-backed Kiev regime staged a military provocation against Russia with three warships violating Russia's maritime territory. The Kiev regime and Washington then turned around and accused Moscow of "aggression" after Russia detained the offending vessels near the Kerch Strait — a few km from the Russian mainland.

Last week, on December 6 — four days before the Russian TU-160s bombers landed in Venezuela (2,450 km from Florida!) on a scheduled trip between two allied nations — the US air force dispatched a surveillance plane over Ukraine on Russia's western border. It was described by gung-ho US channel Fox News as an "extraordinary flight" over Ukraine "in response to Russia's unprovoked attack".

Onboard the US surveillance warplane was military personnel from Britain, France, Germany — and Ukraine, the very regime which staged the provocation in the Kerch Strait only days before.

The Fox News report continues: "The Open Skies flight [on December 6] also took place one day after a US Navy guided-missile destroyer sailed into waters claimed [sic] by Russia… near the port city of Vladivostok, home to Russia's Pacific Fleet. It was the first such voyage for the US Navy in Russia's contested waters since 1987."

© Photo : Nord stream 2
Firms Involved in Russian Nord Stream 2 Face Risk of US Sanctions - State Dept
So there you have it. US forces are marauding and menacing Russian territory almost non-stop with hundreds of warplanes and ships, from north, south, east and west. And yet when two Russian bombers land in Venezuela, Washington goes into paroxysms of indignation. That is a measure of how irrational and brain-dead the American political class are. Their capacity for double-think is limitless because of the propagandized fantasy world they have come to perceive as reality.

It's impossible to rationalize with such people through reasonable dialogue. The only language that might get through to them is a show of force when their idiocy goes too far.

Russian forces in Venezuela are not even comparable to US forces in Ukraine or the Baltic Sea in terms of proximity. Cuba would be more appropriate. But they are perhaps enough to show the arrogant buffoons in Washington that there is a tolerance limit for American aggression.

For the sake of peace, everyone needs to de-escalate military forces eventually. But the onus for that move is patently on the US with its global sprawl of war machines and outrageous attitude of impunity from sticking its weapons in the faces of other countries.

This harks to the Cuban Missile crisis of 1962. Why should US military forces be permitted to threaten others halfway around the world, and expect no reciprocal response? The days of American bullying double-think are long over. Fortunately, too, paradoxically, for the sake of world peace.

Views and opinions expressed in the article are those of the columnist and do not necessarily reflect those of Sputnik.