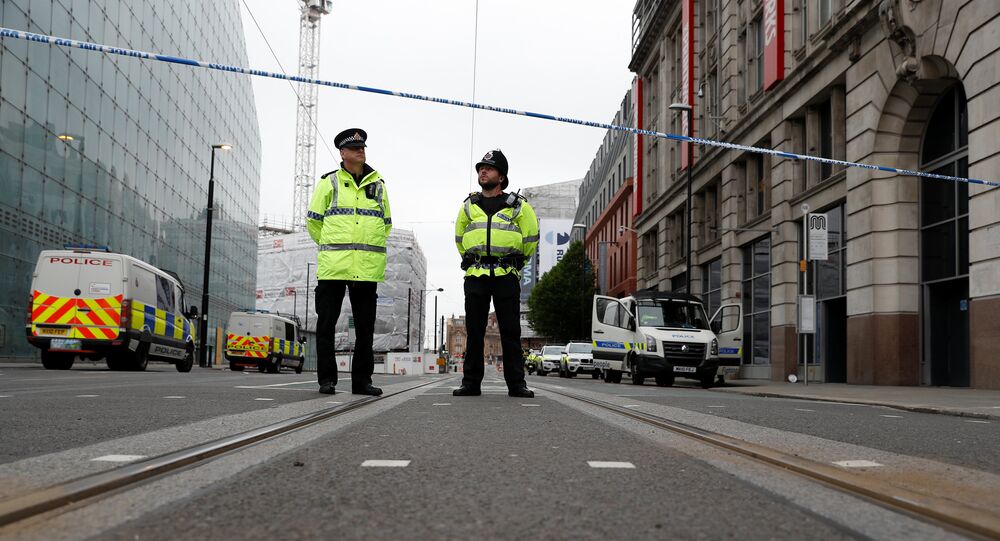 The headline, “Police must concentrate on burglaries and violence say Police Chief” ranks up there with the mythical, “Man bites dog line.”

In a case of no sh*t Sherlock the "Police must police" statement by Sara Thornton has gone down well with the press and the public but please hold your horses before we all start leaving our back doors open again and think we can turn the clocks back to the Dixon of Dock Green era.

Do you really believe that a police force which now "self-identifies" as a service will really go back to just catching bad uns? Do you think a "service "that is riven with political correctness and run by cultural Marxists will really return to doing hard policing?

© AFP 2021 / ANIEL LEAL-OLIVAS
Police Federation Accuses UK Government of 'Prioritizing Potholes' Over Fight Against Crime
Well forgive me for doing the proverbial on her parade but there is no chance.

Sara Thornton's speech was actually all about trying to wring more cash out of Sajid Javid and Theresa May. She dressed it up as her having to prioritize today's crimes above hate crimes and investigations into the dead but in the end, it was essentially just a desperate bid for more cash for the cops.

Don't get me wrong I agree with her. The police do need more cash. However, you have to ask the question where was she and the other top brass when the rank and file of the ever-decreasing thin blue line were protesting and arguing against Theresa May's savage Police cuts which resulted in over 20 thousand Police jobs being lost? They were nowhere to be seen and I should know as I did a lot of the PR for the PC Pleb Campaign and I and those ordinary coppers were bang on the money. The cuts have been devastating and need to be reversed but with Theresa May desperate to cling to power and force through her Brexit betrayal there is no chance of that happening.

To be brutally honest even if they got extra resources I doubt whether the crime epidemic would really be confronted because just look in London where Sadiq Khan thinks it is a good use of resources to put 900 coppers on hate crime and policing the internet whilst moped muggers, jihadists, acid throwers and murderers run amok on the streets of the capital.

Sara Thornton says they need to refocus to core Policing but surely the question has to be how the hell did the British Police force ever lose its focus?

The Police no longer even look like coppers they look like Robocop with their stab vests and black fatigues. They increasingly resemble a para military force but unfortunately the hard image conceals a soft, very soft centre.

So how come if they look so hard why are the streets, as another top cop, Assistant Chief Constable Jacqueline Sebire, stated, "like the Wild West?

© REUTERS / Peter Nicholls
'What We Predicted': Fewer Officers Equals More Crime - Ex-UK Police Officer
Sebire continued,  "I worry, if we can't get this right — and we know how to get it right — I do worry the violence will continue."

She then proceeded to tell us how she knows how to get it right which of course is not going in and breaking a few eggs to make the omelette. No, her "plan" is some Open University clap trap about "a new plan which would see police, health and education officials work together to intervene early and prevent youngsters from being sucked into a life of crime."

Now I am sure that her "plan" is all very worthy and straight out of the common purpose book of touchy feeley policing but it's about as much use a chocolate fireguard in terms of taking back control of our streets now isn't it?

Justifying her softly softly approach she says "In the past people were more careful about doing this in front of cameras or in full view. There's a disregard for the seriousness of the consequences."

© REUTERS / Stefan Wermuth
UK Police Review Warns of 'Dire Consequences' Without More Police Funding
No Jacquie, kids as young as 9 are carrying knives because they know there are hardly any consequences for their crime, and they are not in any way afraid or respectful of the boys in blue, or black.

The Police, despite their Robocop image have ceded the streets to these yobs. Ordinary cops are scared to pursue these criminals for fear of being wrapped up in diversity paperwork or pursued by their own internal investigations teams for being racist homophobic or transphobic.

We also have a Prime Minister and a London Mayor who both believed that stop and search was racist and therefore reduced its usage whilst knife crime and murders spiralled out of control? Go figure!

To be frank Jacqueline we need the police to understand less and condemn more. We need the police on the streets dealing with the clear and present danger of these feral yobs and leave the understanding and analysis to the social services and education people. Jacquie just put your stab vest on and go and nick the bad uns and leave the philosophy, sociology and psychology to other people please.

The Police do need more funding and more manpower (am I allowed to use that term) but then they need to enforce a strict zero tolerance policy and broken window philosophy onto our streets.

I have met and interviewed Bill Bratton who was the chief of Police In the Big Apple and the architect and enforcer of the Broken window philosophy.

I remember asking him how did they get rid of the graffiti on the subway? He fixed me with his steely blue eyes and said, "car by car and line by line."

© Sputnik / Evgenia Filimianova
UK Policeman 'Deliberately Driven at' in Leicester, Area on Lockdown - Police
Like a modern-day Clint Eastwood, Bratton rode into town and turned New York from the crime cesspit it was into a much safer and cleaner environment. This Vietnam Veteran exuded confidence and had a steely determination to nick the bad guys and return the streets to the silent decent majority.

We in the UK had the chance at one point to have Bratton as our chief and if that had happened I do not think we would be in the mess we are in today with Dick of the Yard and selfie-loving Sadiq presiding over a spiraling knife, gun, moped mugging and acid throwing crimes.

It worked in New York so why couldn't it work here?

Of course, the answer is it would work here if it was backed up by the Courts with real sentences where five years means five years and ten means ten and life means life. Then the Police and decent people could slowly begin to retake our streets.

READ MORE: Too Young to Drive? UK Police Arrest Child for Joyriding at More Than 100mph

The time for analysis, naval gazing and sitting in your car whilst a fellow officer is stabbed to death by an Islamist nutjob is over.