Just when you thought the Tories couldn't go any lower, or get any nastier, they just did.

This week's party conference at Birmingham has been an absolute NeoCon horror show — with the only thing missing, guest appearances from Count Dracula and Frankenstein's Monster. Actually, they probably wouldn't be allowed in, because they were foreigners.

The proceedings would make the decent One Nation Tories of yesteryear, men like Sir Ian Gilmour, RAB Butler, and Reggie Maudling, feel utterly ashamed if they happened to miraculously return to life and heard the speeches.

Foreign Secretary Jeremy Hunt, the man who couldn't even remember the nationality of his own wife a few weeks back, set the ball rolling when he compared the EU to a Soviet prison, a slur on both the EU and the Soviet Union. He then went on to attack modern Russia for 'walking across the borders of Ukraine and Georgia as if they didn't exist'. 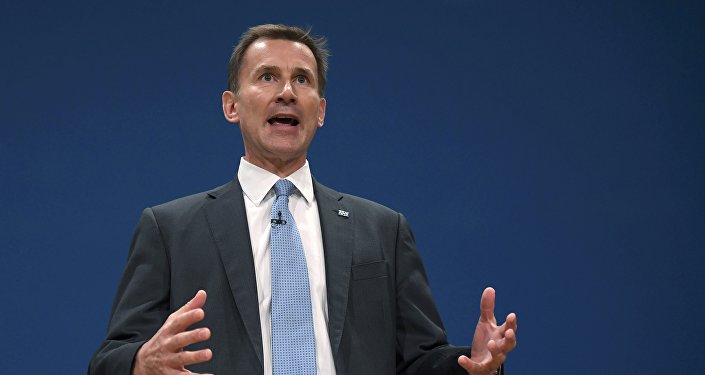 © REUTERS / Toby Melville
Jeremy Hunt and the UK Government are the 'Malign' Actors, Not Russia
Of course this was nonsense from 'Hunt the Shunt': Ukraine was not invaded by Russia, (Crimea voted in a democratic referendum to return to Russia following the Western-backed ouster of the democratically elected government in Kiev in 2014), and the action in Georgia was a response to Georgian aggression against South Ossetia in 2008. Hunt lambasted Jeremy Corbyn — a common theme throughout the conference, for not 'condemning the first-ever chemical weapons attack on British soil in Salisbury this year'.

But the much-maligned Corbyn did condemn the attack. His 'crime' was not rushing to blame Russia, without evidence. Having denounced 'Russian bullies' and talked about his support for a 'democratic world order', Hunt then boasted — without any sense of irony- how he had had dinner last week in New York with one Dr Henry Kissinger.

Did he bring up the subject of America's carpet bombing of Cambodia when Kissinger was Secretary of State, I wonder? The bombings killed between 150,000 and 500,000 people. Or did he ask Dr K about the US's role in destabilizing the democratically elected Chilean leader Salvador Allende,  who was toppled in a military coup in 1973?

Hunt's speech — which of course included the obligatory mention of how he had a bust of Winston Churchill in his office, was bad enough, but then came Environment Secretary Michael Gove. I am personally acquainted with Michael and although we are poles apart politically, I quite like him. When working at The Times as comment editor in the late 1990s, he tried hard to get a piece I had written on Yugoslavia — in defense of its Socialist government — into the paper, which I appreciated and I've never forgotten.

We've exchanged emails, met once socially, and we follow each other on Twitter. But Michael, old thing, your speech at the conference was an absolute shocker!

After condemning Labour 'anti-semitism', Gove then launched into a ferocious and extremely personal attack on Corbyn — which began with the words 'Moscow-loving' and also included 'Hamas-hugging' and 'NATO-hating'.

There could be no better example of the double standards which lie at the heart of British politics in 2018. One form of racial prejudice — anti-semitism — is denounced from the pulpit, (but only in relation to the Labour Party), while in the very next sentence another — Russophobia — is openly indulged in. How diseased can our discourse be when 'Moscow-loving' is regarded as a legitimate insult?

Watching Hunt and Gove in full flow I had to check my calendar to see that we haven't been transported back to the 1850s. Then as now, Russophobia was promoted by the British ruling class to divert from mounting problems at home. The result of this willy-waving Politics of Mass Distraction was the disastrous Crimean War and the utterly catastrophic Charge of the Light Brigade.

© CC0
Russian Embassy In London: Russophobic Hysteria Threatens to Ruin UK Reputation
In the Crimean War, a higher percentage of British soldiers were killed than in the First World War. Watch Tony Richardson's wonderfully subversive 1968 film 'The Charge of the Light Brigade' on DVD and play particularly close attention to the brilliant 'The Russians! The Russians! The Russians!' animated sequences of Richard Williams which lampooned the Establishment jingoism of the time.

Then switch the 2018 Tory conference back on and see if you can tell the difference.