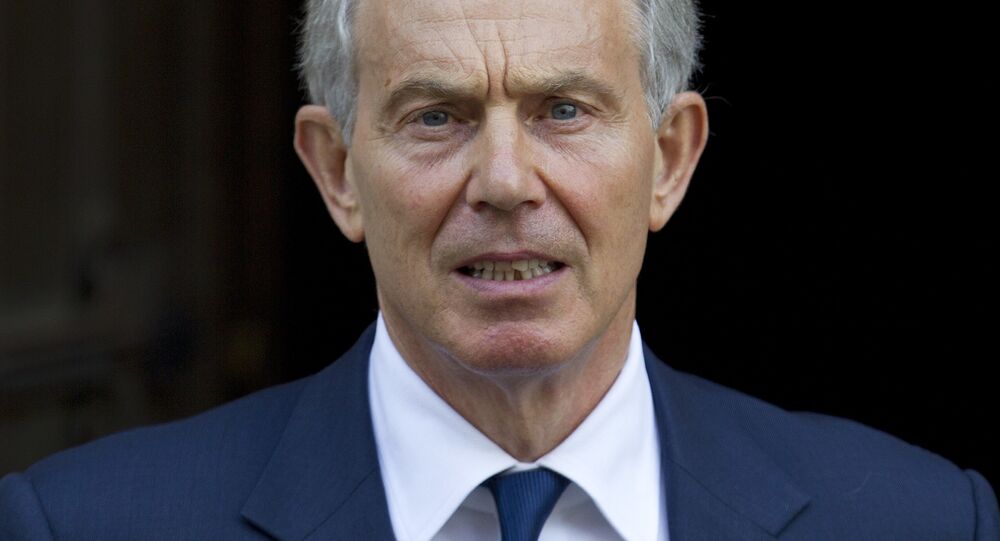 The name Tony Blair is synonymous with lies, deceit, warmongering and mendacious manipulation of information to create a false but deliberate narrative.

I rage whenever I am forced to listen to Blair’s pontifications but despite his despicable political record he is still guaranteed friendly media airtime whenever he chooses to bump his gums in pursuit of more lucrative speaking tour contracts or Saudi Arabian blood money for services rendered. Tony Blair should be prime time news but the story should revolve around his trial in The Hague as he sits in the dock accused of war crimes and complicity in the loss of up to one million lives on the back of his Iraq war adventure in 2003 that was based on lies.

Blair and his deft deceit and manipulation of information comes to mind right now in connection with the "Novichok" affair and the alleged attempted murder of the Russian ex-spy Sergei Skirpal and his daughter Yulia in Salisbury, England. In the midst of the incredible media hype and rush to judgement without even tokens of independent and verifiable evidence we are all supposed to believe that the apparently ‘ruthless’ and ‘brutal’ regime of Vladimir Putin is responsible for this alleged crime. Those with even a morsel of independent thought asked the key question early on in the story, why? Why on the eve of the global stage prestigious football world cup would Russia dispatch trained killers to kill an old guy who had been traded to the West 8 years earlier in a spy exchange deal?

© AP Photo / Petros Karadjias
Ex-UK PM Blair Discussed Brexit, Immigration & Pipeline With Italy's Salvini in 'Friendly' Rome Meeting
This is the most important question of all. Why assassinate Sergei Skirpal? Secondary questions include how such an apparently ruthless and brutal regime like Russia could cock up so spectacularly the slaying of a 66-year-old man in sleepy Salisbury? Were these would be assassins on the equivalent of a government training programme, a kind of Youth Training Scheme (YTS) for trainee assassins? Not according to the impeccable and irrefutable news source that the Western world has grown to trust and rely on, Bellingcat… Sit up in the back row. Stop sniggering. What do you mean you have never heard of them?

They must be good because their ‘intelligence’ led the news bulletins on every station the other night and made just about every front page. The Russian citizens tracked down by the various CCTV outlets are not tourists after all. They are state assassins. Or at least one of them is. Okay the photos are a bit dodgy, the leaps of faith required huge and the storyline remarkably convenient but it must be true because the BBC, The Guardian and even Channel 4 say so. They have massive investigative budgets but they prefer to rely on the ‘award’ winning online news site Bellingcat because it fits the British Government narrative perfectly. Tony Blair would be proud of Bellingcat, or perhaps jealous.

There is no rational reason for Russia to assassinate Sergei Skirpal but there is plenty of motivation for the British Establishment to ratchet-up anti-Russian sentiment and try to create the fear and loathing that served them so well in the cold war years when extortionate expenditures on missile systems and other ‘defence’ measures could always be justified on the back of ‘the Russians are coming’ warning. The use of useful idiots like those behind Bellingcat is not new. These guys verified the use of chemical weapons by the Syrian Government from the comfort of their sofas 3,000 miles away in Leicester and the facts behind the downing of Flight MH17 with the use of cropped photographs and invented sources.

Real investigative journalists like Robert Fisk, reporting from the ground in Syria, exposed the complete lack of any evidence linking the Syrian Government to chemical weapons attacks.

While guys like Seymour Hersh with experience and track records of exposing the lies and shenanigans of powerful governments have slated Bellingcat allegations on numerous occasions for their evidence-free propaganda that laughingly poses as news. Yet still we are supposed to swallow the propaganda because it is given credibility by the mainstream media.

Sorry guys remember Blair and his Parliament speech which had Saddam armed with multiple weapons of mass destruction and ready within 45 minutes to attack Britain. He used ‘evidence’ and allegedly reliable ‘information’ to whip the UK into a frenzy of fear and justified a ‘shock and awe’ bombardment which killed over a million human beings and destabilized the whole of the Middle-East for the last 15 years. Remember Iraq was not involved in the 9/11 Twin Towers attack in 2001 and al Qaeda was not present or active in Iraq prior to 2003.

Blair wasn’t alone. Bush told him to jump and Tony dutifully yelped ‘how high’. Bumbling George W. had more believable and credible souls like decorated four star General Colin Powell to promote the case for war with stories about aluminium tubes which could be used in centrifuges to enrich uranium and how Iraq purchased dangerous uranium yellowcake from Africa. He said the information he used was sound but we now know from former CIA sources that every bit of that narrative regarding Iraq and uranium enriched weapons and WMD’s was not only untrue it was verifiably untrue at the time it was propagated. But it was powerful stuff. It worked in the U.S. every bit as effectively as Blair’s ‘dodgy dossier’ deceit worked in the UK. Largely because the mainstream in both cases lapped up the propaganda and reported it as gospel without proper interrogation or investigation or questioning of the narrative. They didn’t hold the state to account. They dutifully served the state as a useful and powerful component part.

© AP Photo / Frank Augstein
Farage's Fury as He Calls Anti-Brexit House of Lords 'Traitors in Ermine'
We should not be surprised. I was barely 4 months old when a different American President announced bombing sorties and unleashed hell on North Vietnam on the evening of 4th August 1964 in retaliation for an “unprovoked attack” on American warships in the Gulf of Tonkin. The U.S. had been secretly involved in that war since 1950 supporting the French and supplying arms and military advisers to South Vietnam but the Gulf of Tonkin was the pretext for their open military involvement. The war lasted until 1975 and over 58,000 American soldiers perished. However, the loss of Vietnamese lives was truly horrific. As many as 2 million civilians on both North and South Vietnam, 1.1 million North Vietnamese combatants and up to 250,000 South Vietnamese combatants all died, most as a result of American carpet bombing and deliberate use of chemical weapons. Yet the truth revealed by disgusted Military Analysts in later years showed the Gulf of Tonkin incident was a lie. There were no “unprovoked attacks” . But at the time it was reported as truth, based on evidence and information parroted dutifully by the mainstream media.

In other words when faced with official government narratives that are promoted as nauseam by the press and media to create an atmosphere of fear and loathing against other nations I think it is the duty of rational and decent human beings to pause and pose searching questions. Always ask why? Why are we being whipped into frenzy against a particular nation or individual? Who benefits from such a situation? ‘Reasonable doubt’ is not just a legal term it should be a guiding philosophy for each and every one of us.

Information sites like Bellingcat are financed by Western government agencies and proxy groups to spread convenient propaganda. Don’t believe them or the lines the billionaire press and media feed you.

Read Robert Fisk, John Pilger, Seymour Hersh and many of the other investigative journalists and websites that seek to find truth within the government propaganda which is so often an elaborate tissue of lies and distortions. Always remember the words of Dom Helder Camara the courageous and wise Brazilian Archbishop and liberation theology advocate:

The views and opinions expressed by Tommy Sheridan are those of the contributor and do not necessarily reflect those of Sputnik.