Chile and her 60,000 victims of US meddling must be remembered today.

Across much of the world, particularly in the West, today has been shortened to just ‘9/11’ and most associate it with the gruesome and awful terror attacks which targeted the World Trade Centre in New York, the Pentagon in Virginia and, unsuccessfully, The White House in Washington. American symbols of power, wealth and prestige. Almost 3,000 people were killed and over 6,000 were injured this day 17 years ago when hijacked planes were used as weapons by the Islamist terror group al-Qaeda* to visit pain, fear and destruction on America, the most powerful nation on the planet. Yet the original ‘9/11’, also on a Tuesday and also involving the mighty US, hardly merits a thought or a mention in the Western media despite the fact the loss of innocent lives was 20 times greater and the pain, fear and destruction that was inflicted lasted even longer. History and fairness demand today is about remembering Chile 1973 not just New York and Virginia 2001.

"The people must defend themselves, but not sacrifice themselves. The people must not let themselves be levelled or mowed down, but neither can they let themselves be humiliated. Workers of my homeland! I have faith in Chile and its destiny. Other people will overcome this grey and bitter moment where treason tries to impose itself. May you continue to know that much sooner than later the great avenues through which free men walk to build a better society will open."

© AP Photo / Richard Drew
Nobel Winner or 'War Criminal'? Untold Story of Kissinger's Role in 1973 Chilean Coup
The last speech of a hero. The democratically elected President of Chile in 1970 was Salvador Allende. He was elected on a radical programme of wealth re-distribution, nationalisation of Chile’s copper mines and challenging the grotesque inequality and poverty which scarred Chile as it scarred the whole of Latin and South America. On Tuesday 11th September 1973 Allende was in La Moneda, the Presidential Palace in the Chilean capital Santiago with trusted aides while outside a bloody, brutal and U.S. connived military coup was taking place. Allende was offered safe passage out of the Palace and out of the country by the aggressors, led by a callous and devious General Pinochet whom Allende himself had appointed only 12 days previously. Allende ordered his daughter and other civilians to take up the offer of safe passage but refused to abandon his post. He stared death in the face but refused to surrender such was the strength of his convictions and his belief in democracy and the Chilean political process.

His last speech was broadcast to the Chilean people via a hook-up with Radio Magallanes and was broadcast on air in defiance of the military who pounded the palace with heavy artillery, tanks and planes against the handful of guns and a single bazooka in the possession of Allende and his small band of loyal defenders. Repeatedly the Pinochet-led army tried to get Allende to give up and repeatedly, with calmness, dignity and courage, he refused. Eventually the Palace was breeched and Allende was murdered, defiantly, with a machine gun in his hand. Thousands of his fellow countrymen and women were similarly murdered, arrested and/or tortured that day. The Santiago sports stadium was used as a makeshift prison and in the course of the following days, weeks and months up to 60,000 Chilean citizens were killed, many after being beaten and tortured for days, including the celebrated poet, singer, activist and academic Victor Jara.

Please educate yourself. Purchase the small but magnificent anthology of reflections on the 1973 coup ‘Chile: The Other September 11’ (Dorfman et al 2016) or the more comprehensive ‘Salvador Allende Reader: Chile’s Voice of Democracy’ (Cockcroft & Canning (eds.) 2000). In the former read the witness accounts of the last days of Victor Jara’s life compiled by his loving wife Joan Jara:

"I have two more glimpses of Victor in the Stadium, two more testimonies… a message for me brought out by someone who was near him for some hours, down in the dressing rooms, converted now into torture chambers, a message of love for his daughters and for me… then once more being publicly abused and beaten, the officer nicknamed "the Prince"  shouting at him, on the verge of hysteria, losing control of himself: "Sing now, if you can, you bastard!" and Victor’s voice raised in the stadium after those four days of suffering, to sing a verse of the Popular Unity hymn, "Venceremos."  Then he was beaten down and dragged away for the last phase of his agony." (p36 Dorfman et al) 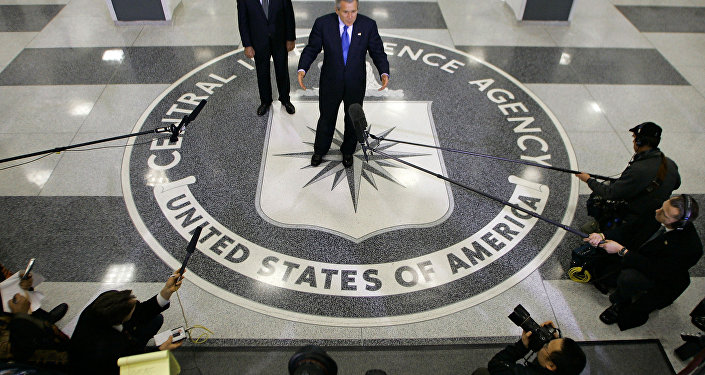 © AP Photo / J. Scott Applewhite
Seven Decades of Organized Crime: Central Intelligence Agency Turns 70
Victor Jara was tortured and beaten to death. Many thousands suffered a similar fate. Up to 60,000 in total were killed during and in the aftermath of the Pinochet led coup. But who orchestrated this monstrosity? Who engineered the economic chaos which severely handicapped the elected Allende government providing the finance, military hardware, knowhow and international go-ahead and back-up for this horrific crime against humanity and democracy? The United States of America, that’s who. Or more precisely the small cabal at the heart of government who work under cloaks of secrecy and flags of convenience to implement plans hatched in the White House which literally decides the fates of whole countries and their people no matter their democratically expressed wishes.

Months before the 1970 election in Chile the White House "Committee of 40" met on March 25th under the direction of National Security Council Director Henry Kissinger, in close cahoots with the then President Nixon to approve the transfer of monies to right wing groups in Chile to try and scupper Allende’s Popular Unity coalition from ever securing power and agree that should he actually succeed measures should be implemented to de-stabilize the economy enough to usher in a military overthrow. In June Kissinger tells that secret "Committee of 40” group that should they fail to prevent Allende from being elected, "I don’t see why we need to stand by and watch a country go communist due to the irresponsibility of its own people."

READ MORE: US Releases Documents on Nixon Support for Pinochet‘s Coup in Chile

In a three-way contest and against all the odds the Popular Unity programme of socialist policies promoted honestly by Allende wins the day with 36.3% of the vote in the September 4th election. Constitutionally the Congress of Chile has to decide who becomes President but normally endorses the candidate who wins the largest share of the popular vote. The "Committee of 40" steps up its secretive, undemocratic and illegal activities to interfere in another countries’ democratic process channelling millions of dollars to opposition groups to undermine Allende and President Nixon, on September 15th, orders the Central Intelligence Director (CIA), Richard Helms, to prevent Allende’s accession to office. When that fails the CIA works alongside the "Committee of 40"and several U.S. Corporations, like International Telephone and Telegraph (ITT), Ford Motor Company, Bank of America, Anaconda Copper and others to deliberately scupper the economy and cause hardship and chaos while millions more dollars were funnelled to newspapers, radio stations and opposition politicians to inflict maximum damage against Allende. (Think of Venezuela today to get a handle on the process.)

Yet Allende tried to stick to his manifesto promises and increased wages, nationalised the copper industry and implemented other popular measures. In a democratic test of his popularity the country went to the polls on April 4th 1971 in an election involving 280 municipal seats. In a four way contest Allende’s Popular Unity coalition won 49.7% of the vote, a result secured on the back of the historic decision to allow 18-21 years olds the vote for the first time ever. Young people overwhelmingly supported the radical Popular Unity programme of change. 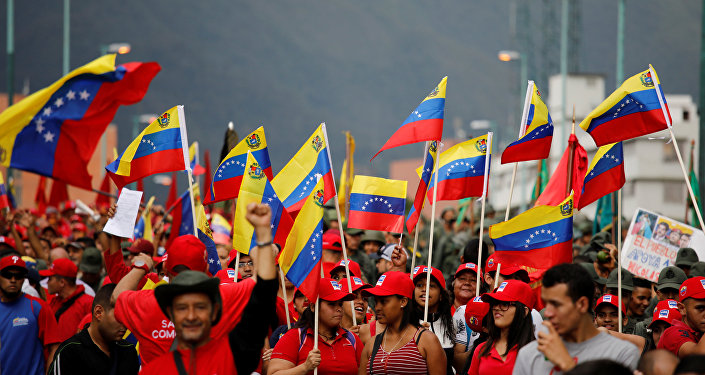 © REUTERS / Andres Martinez Casares
EXCLUSIVE: Why Everything the Western Media Tells You About Venezuela is Lies
Nixon, Kissinger and the bosses of the big corporations were enraged by this democratic endorsement of Allende. They were already engaged in a dirty, and initially secret, war in Vietnam. The failure of the Bay of Pigs invasion of Cuba in 1961 left Castro in power and his popularity was rising. The self-appointed policeman of the world and exporter of democracy couldn’t allow Chile’s democracy to work. It was the wrong type of democracy. In their name, but without their knowledge or consent, Nixon, the CIA and the economic captains of industry upped their interference in Chile and financed, planned and directly supported the military coup which overthrew Allende on September 11th 1973.

That is the 9/11 which should be remembered today. That is the 9/11 which should be taught and discussed in schools and colleges across America and the Western world. William Blum’s ‘Rogue State’ (2002) should be core reading. Americans need to learn that their governments and secret security service and military personnel have been involved in the direct bombing of at least 30 countries since World War Two and have engineered military coups and the empowerment of brutal and bloody tyrants in a similar number of countries. The facts are there for all to see. The U.S. is quite simply the biggest rogue state on the planet. In the aftermath of the horror in September 2001 serious and sober politicians, academics and ordinary citizens asked Why? Why would anyone wish to attack America? A basic understanding of their blood-soaked history and role across the world would answer that. What happened 17 years ago in New York was certainly inexcusable but it was far from inexplicable. Knowledge and understanding of the original 9/11 contains all the clues for those willing to read and open their minds.