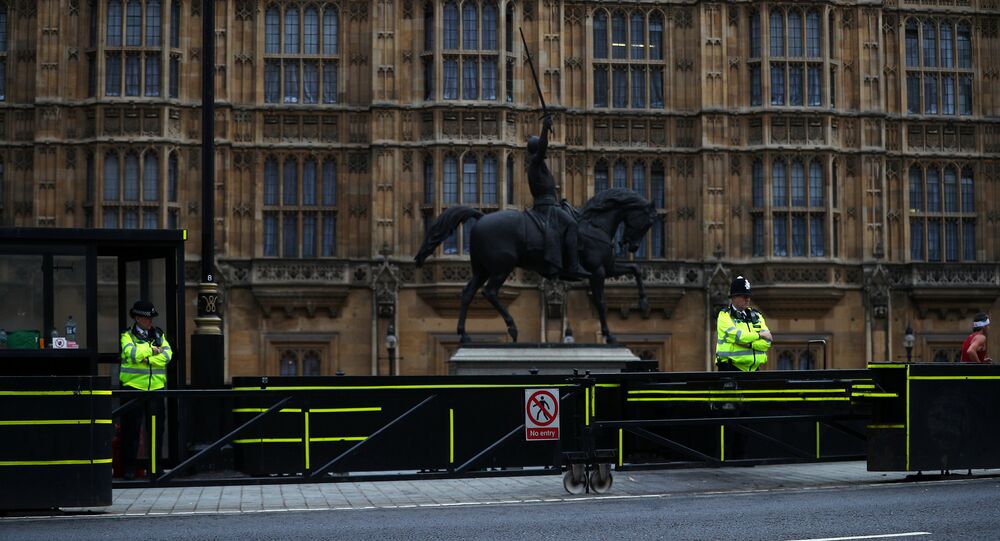 Theresa May I am Angry

I am sorry Theresa May but I am looking back in anger this morning. I and many millions more in this country are really bloody angry, not at Muslims, not even at the terrorist, but angry at you and the rest of the Westminster Swamp who are failing in your first basic duty, which is to protect us.

Oh, what a surprise that the latest terrorist nut job is an immigrant from Sudan or as the Security Minister, Ben Wallace, told the BBC, in typical PC language (i.e. do not mention the I or M word) "He is a British citizen who is originally from abroad."

Isn't that what we use to call an immigrant?!

© REUTERS / Hannah McKay
'Will Never Understand': Netizens Infuriated by Tourists Taking Selfies Near Westminster Ramming Site
Correct Mr Wallace and now for being such a good PC poodle you can give out the pencils at the next cabinet meeting or the aptly named Cobra meeting. Is it called cobra because they must be drunk to come out with their half-baked plans on how to react to terror on the streets of the UK?

Back to Mr Ben, actually mate this terror nutjob lives in Birmingham in a scruffy flat above an internet café just ten minutes from the former home of Khalid Masood, who 17 months ago murdered innocents on Westminster Bridge.

Shall I do the dot to dot for you Mr Ben? Pass me a pencil? A five-year-old could work out that no amount of Cobra or Cobra meetings or pussy footing around is going to protect us we need tough action.

We need a leader who says, "Another terrorist attack in London…These animals are crazy and must be dealt with through toughness and strength!"

Unfortunately, these are the words of Donald Trump, not Theresa the Appeaser who is probably donning a headscarf as we speak and polishing her speech about how this has nothing to do with Islam whilst telling us not to look back in anger, light a flipping candle and sing Kumbaya.

In fact, she actually said, "I would urge the public to remain vigilant — but also to come together and carry on as normal, just as they did after the sickening attacks in Manchester and London last year." "The twisted aim of the extremists is to use violence and terror to divide us. They will never succeed."

So, in other words, it's a case of, move along please nothing to see here.

No doubt the attention will now swiftly turn back to the real enemy of the West, Donald Trump and his comments will be condemned by our spineless politicians as "inflammatory" and "ignorant".

Whereas they are in my opinion more in tune with British public than anything coming out of the Westminster swamp.

© REUTERS / Hannah McKay
UK PM Calls Second Terror Attack on Westminster 'Shocking'
Be straight with me, do you honestly feel any safer on the streets than you did 17 months ago when Khalid Masood killed 5 innocents in Westminster or after Salman Abedi slaughtered 22 in Manchester? All together now, "Don't look back in anger"

In fact, Theresa Dismay yesterday told us, just before she sang Kumbaya, that the number of live counter-terror investigations had leaped from "more than 500" in March 2018 to the astonishing figure of 676.

But don't worry, the security services have foiled 13 Islamist plots in the past 18 months and 4 by far-right extremists. Oh, that's a right then we can all sleep easy, can't we?

Yes, we can Jon because then they tell us that this nut job, Salih Kahter was a lone wolf…again. How many lone wolves do the Establishment need to make a pack?

This whole narrative is pure propaganda.

We are also told he wasn't known to the Police or security services. Are we, therefore, meant to add him to the 23,000 in the UK that the Government warned were already a threat to us? Or should we add him to the 700 fully trained home-grown jihadists and traitors who they have recently just let back into the UK?

Those in power are either stupid or deluded or perhaps they think we are?

We've had days of nonsense talking about Boris comments, where he didn't even call for a ban on the Burka, as if his words were a threat to national security and community integration but we have a terror attack and we are just told to move on?

I don't think words kill you, knives, machetes, guns and now cars and trucks do.

There were even tweets within seconds of yesterday's attack linking Boris' views on the Burka as the reason for the attack! I thought the liberal intelligentsia had told us, plebs, to never speculate and never ever link terror with Islam? It is pathetic.

© AP Photo / Tim Ireland
Westminster Car Crash: Driver May Had a Sudden Seizure or Medical Condition - Prof
Don't panic though guys, as Dick of the Yard is in charge with Sadiq Khan who has said again that, "Londoners will never be cowed, intimidated or divided by terrorism."

Dick's solution is not to be cowed but instead to pedestrianize Westminster!

How do these useless politicians and Coppers keep a straight face when they come out with this garbage?

I was in Birmingham yesterday trying to get my daughters phone fixed and I tweeted this,

"Forget London I'm in Birmingham and there are security barriers everywhere. I do not want to live like this I want my government to sort out this enemy. Stop pussy footing around. I say no to no go areas! Enough is enough. Stop getting upset with words and deal with terror. Agree"

My tweet got an incredible response as I had obviously hit a nerve.

I stood outside the Apple store waiting for my daughters and it is right next to the huge yellow security barriers that are there to stop a car or lorry attack I presume.

I was thinking, is this how we want to live from now on as if we are in a war zone?

Then a woman in the full Burka including gloves and veil walked silently out of the store. She was with a young Muslim fella dressed in shorts, t shirt, fag in one hand and his I phone in the other.

He was a typical young Brummie but who was the Dalek next to him? His mum, his wife, his girlfriend, his daughter?  Who knows? Who cares?

Well, I'm really sorry if this is politically incorrect but I do care as I think there is a clear link between the Burka and terror.

© AFP 2020 / ANIEL LEAL-OLIVAS
UK Chancellor Urges EU to Accept PM May's 'Fair & Sensible' Brexit Plan
Calm down I am not saying all people in Burkas are terrorists and I am certainly not saying all Muslims are the enemy far from it but I have to agree with the Imam Taj Hargey who says it is a symbol of resistance and defiance.

Why are our politicians so scared of confronting this? It couldn't be anything to do with us selling them fighter jets could it!

We need this debate now, in fact, we should have had it years ago but instead, we are given all this nonsense about young Muslims being radicalized or brainwashed on the internet!

We do not need backdoor blasphemy laws and conflated Westminster rows about words, we need action tough decisive action.

Put down the Cobra, the candles, stop changing you twitter handles and let's get angry with the right people, our politicians and make them confront the real danger. If Theresa May is incapable or too weak to do it could the Conservatives for once please put country before the Party.

I won't hold my breath!