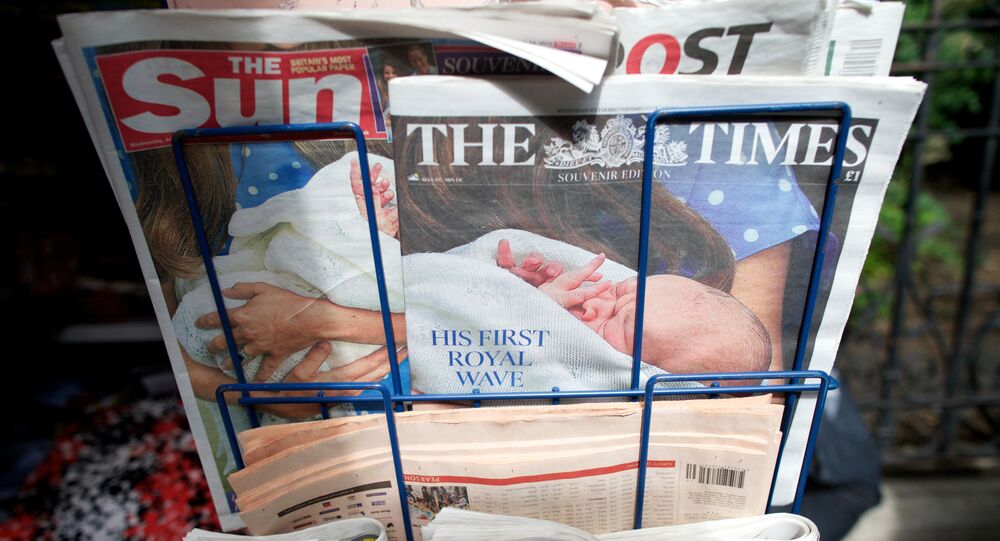 The Alt left and the Far left in this country is much more of our danger to our democracy than the so-called Alt Right or Far right, but you would never know this from the hysterical (in every sense of the word) reaction and reporting of the MSM and the BBC in particular.

The usual suspects on the Left were left confused and frustrated when Tommy Robinson was released on bail this week after a clear mistrial, rushed ill thought out judgment and prison sentence.

These two-bit “Marxists” would jump up and down about the human rights of the Beatle Jihadist and anyone else who is sent to Guantanamo but were strangely silent over the clear wrongful imprisonment of Tommy. (was this a case of, "Is it cos Tommy is white or right” as Ali G would say).

© AP Photo / Matt Dunham
Global Support for UK Activist Tommy Robinson Boosted By His Arrest - Research
Now with stories emerging of Tommy being held in solitary 23 hours a day in a cell directly opposite the Muslim prayer doom, the excrement being pushed through his cell door and him having to eat only cans of tunas as other prisoners were spitting in his food are emerging.

It's hard to disagree with the For Britain party leader, Anne Marie Waters who in an interview for my Sputnik radio show tonight says, “Tommy Robinson has been absolutely persecuted for years” “It was mental torture for him in Prison, it’s disgusting.” “It’s a scandal disgraceful”

READ MORE: 'They Tried to Mentally Destroy Me': Tommy Robinson Speaks Up After Release

If this was a case of one of Sadiq Khans gun-toting gangsters who had been imprisoned with such haste or who had been blown away by the cops (some chance with Dick of the Yard in charge) the Guardian’s Owen Jones and the usual suspects would have been all over the BBC bleating about human rights abuses.

As my former radio colleague, Nick Margerrison succinctly summed it up on Twitter this morning.

“It's hard to believe those who hate Tommy Robinson see his imprisonment and subsequent treatment by the establishment and their media mouthpieces as a success. They've shot themselves in the foot and made him into a martyr while simultaneously dragging the law into disrepute.”

Nick is correct and Tommy, by effectively flicking his middle finger up to the MSM and calling them all liars as he left his prison cell has sent the biased media in this country into a tailspin and a desperate search for another person, any person or persons on the right to attack.

© AFP 2021 / William WEST
'Assault on Free Speech': GOP Lawmaker Speaks at Free Tommy Robinson Rally
BBC Radio Four’s Today programme interviewed Raheem the morning after the release of this political prisoner and he triggered every lefty snowflake in the country.

I have re-listened to the interview and I think it was actually fair. Although as usual the BBC interviewer acted as a biased manner and was desperate to caricature Raheem as a racist and even a white supremacist (some feat as Raheem was born a Muslim and has brown skin the last time we had a pint!) but putting that to one side it was a robust discussion where Raheem gave as much as he took.

Cue, the backlash, led by Mr tolerant and well-balanced David Lammy, who screamed in the little read, former newspaper website, The Independent, “The legitimation of white supremacists and fascists who plan to interfere in our politics is a grave threat.” Again I refer to my previous comment about Raheem’s ethnic background.

But none of this would stop the Indy and others on the fascist left from spouting their bile as they then listed some critic complaints like this.

The BBC had given him “a platform to spout dishonest and divisive bile on national radio”, and another said he should “not be given the oxygen of publicity”.

How about not giving any of us on the right any oxygen, full stop! LOL.

© AP Photo
Assange's Attorney Suggests Australian Govt Should Step in to Help Its Citizen
These critics however just turn out to be tweets so I was left wondering how many tweets there were supporting Raheem?!

Then Little Owen Jones jumped on the Lefty “let’s ban everything and burn books bandwagon”, tweeting, “The BBC made Nigel Farage. He'd be nothing without them. And now the media is going to normalize the new far right of Steve Bannon and Tommy Robinson”.

The BBC replied to this nonsense by saying, “We believe our job is to give our audience facts, analysis and information, especially in the case of contentious issues which are surrounded by misinformation.”

Now that sounds like the BBC are learning to be impartial, doesn’t it? But hold on a minute and look what’s happened today where Migration watch has managed to get the BBC to pull an "educational" video from their website. This film, aimed at GCSE pupils, contained claims that Britain was 'multicultural long before curry and carnival' and that debate over immigration had fuelled a 'huge rise' in support of Far-Right politics.

It went on to say ‘Multiculturalism is a powerful tool for survival and possibly the only way to survive, so let's embrace it.'

This illustrates what any of us on the Right are up against. The complete and utter infiltration of politics (all parties), universities and the education system, social services and even the police by the lefty “common purpose” trained or indoctrinated cultural Marxists who seem hell-bent on opposing the democratic will of the people.

© REUTERS / Clodagh Kilcoyne
EU Exploiting Theresa May's 'Weakness' in Brexit Deal Talks - Ex-Minister
This is what the delay about Brexit is all about, this is what lies behind a second referendum and even the ridiculous calls to allow boys to wear skirts at schools. And of course, this is what leads to the repeated shouting down of anyone who objects to this nonsense, which is wrecking our culture and country, as a racist or homophobe or Islamophobic.

As I keep saying on my podcasts when did it become wrong to be Right?

These people are more dangerous than any Steve Bannon or Raheem or even Tommy.

These people want to close down debate, non-platform people, get the BBC to stop interviewing them and even get Nigel Farage the sack from his LBC radio job.

© CC BY 2.0 / Wit Suphamungmee
London Mayor Urges May to Stay in Single Market Post-Brexit Amid Job Losses’ Concerns
People like Owen Jones state they are liberal but they are illiberal to anyone else’s ideas if they do not fit into their narrative.

I know exactly what they are scared of and it is a proper robust political debate where it could result in people supporting the views of Bannon, Kassam, Farage, Anne Marie Waters and god forbid, for the liberal elite, Tommy Robinson.

This is why on my Sputnik show it was refreshing to ask Anne Marie Waters a direct question and give her the time and space to answer it in her own words, the question was,

Are you an anti-Islam Party?

“Yes, I am against the ideology of that religion.”

Is that, far right?

“If you criticise Islam you get called Far Right by the MSM. It is absurd. What we are criticising is far more far Right. We are criticising cruelty, totalitarianism, fascism misogyny, homophobia and anti-Semitism. When that became far right I don’t know but we are living in Orwell’s 1984 and down is the new up”

No further comment from me is needed apart from to say listen to my show Shooting from the Lip on Sputnik tonight and make your own mind up without being told by the “Ministry of Truth what to think.