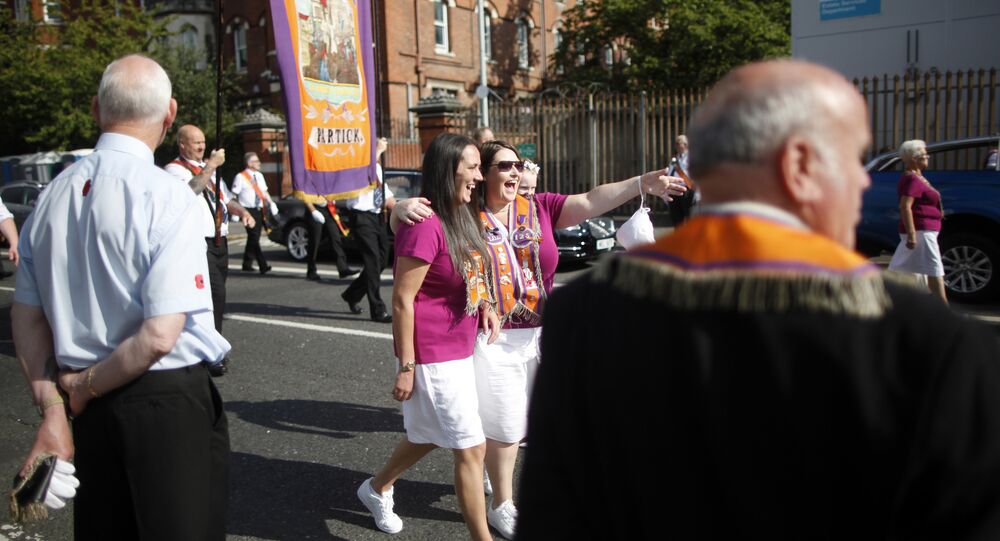 On its website, the Orange Order in Scotland describes itself as the country’s ‘oldest and biggest Protestant fraternity…an organization of people bonded together to promote the ideals of our faith’. Others, however, disagree and regard the Orange Order as an organization rooted in religious and cultural supremacy and anti-Irish Catholic bigotry.

Certainly, it is safe to assume that most of the 80,000-plus people who signed a recent online petition to have Orange Order parades banned in Glasgow, after a Catholic priest was spat on and attacked by an as yet unknown assailant when a parade passed his church, would agree with the latter interpretation of the organisation more than they ever would the former. Among them is included this writer, what with his own experience of bigotry — and the Orange Order's role in fomenting anti-Catholic cultural attitudes in parts of Scotland — as a Catholic in Scotland.

© AP Photo / John Linton
WATCH: Greenpeace Paraglider Breaches Trump Security With Flyover in Scotland
To grow up in Scotland a Roman Catholic, particularly and especially a working-class Catholic, is indeed to become intimately acquainted with bigotry and religious sectarianism from a young age. Its prevalence is such that it becomes branded into your psyche, until you find yourself forced to accept it as part and parcel of the nation's culture, much like tartan and the bagpipes.

It's the small things you remember most: such as having to take the long route to school as a young boy lest you run into boys from the local state (Protestant) school, who will attack you on sight as soon as they see you wearing the Catholic school uniform: such as your dad telling you to write Protestant instead of Catholic on job applications in answer to the question about religion: and such as having ‘Fenian Bastard' daubed on the outside wall of your tenement building.

READ MORE: White House Mocked for Saying Scotland is Not Part of UK in Now-Deleted Tweet

In fact by the early 1980s, when I left school and entered the world of work, I could have been forgiven for believing my actual name was ‘Fenian Bastard' rather John Wight, such was the regularity with which I was called the former in and around the housing scheme where I grew up and spent my formative years.

© REUTERS / Simon Dawson
People in UK, Scotland, Ireland Like Me & Agree With Me on Immigration – Trump
Just in passing, Fenian, for those unaware, is considered a pejorative name for Catholics in this part of the world. However, this being said, the word also carries a historical connotation which is the very opposite of pejorative (at least as far as I am concerned), given that the actual Fenians were members of an anti-colonial movement in Ireland in the mid-19th century — the Irish Republican Brotherhood — which was committed to ending British rule and achieving national liberation.

For generations, politicians and leaders in Scotland have failed to confront the cancer of anti-Irish Catholic bigotry in Scottish society, one that contradicts the boast of Scotland as a successful model of a multicultural society. When it is revealed, for example, that 57% of reported hate crimes in Scotland in 2017 were carried out against Catholics, who make up just 16% of the population, the problem can no longer be swept under the proverbial carpet — as it has been for far too long.

The Orange Order, returning to the original point, refutes any and all allegations of being driven by anti-Irish Catholic bigotry, and in response to the attack against Catholic priest, Canon Tom White, outside his church in Glasgow during the Orange Order parade mentioned earlier, issued a statement condemning the assault unreservedly.

In the statement the organization takes pains to point out that no one from the Orange Order was involved in what the authorities are now treating as a hate crime, stressing the point that it was carried out by someone who'd attended the parade as a spectator.

© AFP 2020 / ADRIAN DENNIS
'Be Careful': SNP Lawmaker Says UK Government May Push Scotland Toward Independence
The question that needs to be asked, though, is why bigoted and sectarian incidents are a regular occurrence at Orange Order parades, and why those involved feel emboldened to carry them out during them? Might it have something to do with the atmosphere of anti-Irish Catholic sentiment these parades generate and the emotions they whip up?

In the aforementioned statement, the Orange Order in Scotland also asserts that the organization is "founded on the principle of religious liberty for all. This includes the right of other faiths to celebrate their own heritage and history, just as we celebrate ours."

Another view of the Order

One man who disagrees with the Order's assertion that it is non-sectarian is Professor Tom Devine.

Widely considered Scotland's most estimable historian, and responding to the news that the Orange Order had secured the services of a PR consultant in an attempt to improve the organisation's image, Devine opined that the "best way forward for them [the Orange Order] is to remove…any traces of anti-Catholicism, because of course the Orange Order was founded in the 1790s in the north of Ireland out of fear of Catholicism." He goes on: "The mainstream Protestant churches don't want anything to do with it and mainstream Scottish opinion, especially during the marching season, treats the organization with hostility and contempt."

READ MORE: Will an Independent Scotland Rise From the Ashes of Brexit?

© REUTERS / Parliament TV
'Scotland Will Not Be Disrespected': WATCH SNP MPs Stage Mass Parliament Walkout
Though carrying nothing like the cultural and social weight of bygone years and generations, the Orange Order currently claims to have 50,000 members, though there is no way of verifying the veracity of this claim. It holds hundreds of parades and marches (known as Orange Walks) annually across Scotland, the bulk of which take place in Glasgow and the West of Scotland. In the past the organization counted among its membership many influential figures from the world of politics and business in Scotland, however, today its membership is comprised mainly of working-class Protestants who view the Order as being reflective of their identity and pride in this identity.

The problem is that this particular Scottish Protestant identity is one that takes as its starting point the assumption that the country's Irish Catholic community is the enemy within.

In 2018 such an assumption is not only ludicrous it is utterly offensive.