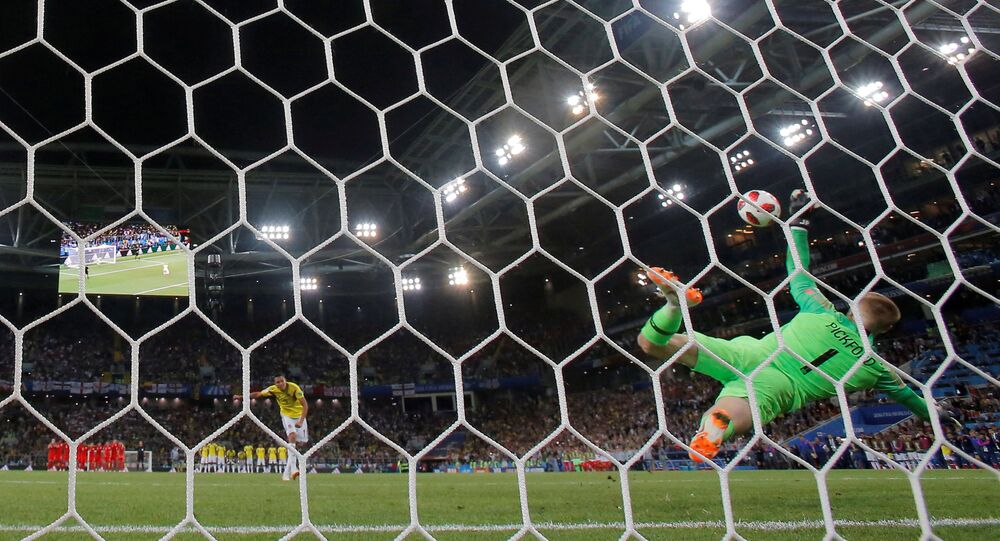 Of the 32 teams that had competed at the 2018 World Cup, there are now only four left: France, Belgium, England and Croatia.

How will the semifinal matches pan out? Who is likely to make it to the final in Luzhniki Stadium in Moscow next Sunday?

The French and Belgian national teams had faced off in the World Cup twice before. In 1938, with home advantage, France won 3-1 and in 1986, the only other occasion when both reached the semifinals, France won 4-2 in extra-time. Overall, Belgium beat France 30 times in 73 matches (France won 24).

In the three previous encounters this decade there have been two 0-0 draws and a 4-3 win for Belgium during friendly game in June 2015.

© CC0
And Then There Were Eight: The Sputnik World Cup Quarter-Finals Preview
One stat in France’s favor is that they've won the World Cup before (in 1998). Seven of the nine World Cups since 1978 have been won by previous winners. The 2018 World Cup in Russia, however, has seen a number of thrilling upsets.

France is the bookies’ favorite to win the match, but don’t forget that the odds were 11-4 on Belgium to beat Brazil in the quarterfinal.

Of the two teams, Belgium is more exciting to a neutral audience. The team's previous manager Marc Wilmots kept the handbrake on at the last World Cup, and the Red Devils lost 0-1 to Argentina in the quarterfinal when they could have achieved more. As I noted in my analysis of Belgium’s chances in January, the more attack-minded manager Roberto Martinez is the perfect fit for the team.

READ MORE: Football: How to Revive the Magic of the FA Cup

Belgium scored an astonishing 43 goals in qualifying (the highest ever) and it is the top scorer in Russia with 14 goals, averaging almost three goals a game. Martinez has set his talented players free and is reaping the rewards.

© Sputnik / Ramil Sitdikov
UK Foreign Office Advises World Cup Fans Visiting Russia to Remain 'Vigilant'
France, by contrast, generally plays more cautiously under Didier Deschamps. They have scored five fewer goals than Belgium — and took part in the only goalless draw so far in the tournament — against Denmark. They only really "went for it" when they were down 2-1 to Argentina in the round of 16. But the way they turned that deficit round to a 4-2 lead was quite dazzling — showing everyone that when the handbrake is taken off, they can be as flamboyant as Belgium. Considering that two of the last three encounters between the two teams have ended in a draw, and the third game was decided by the odd-goal in seven, its seems quite likely that tonight’s game will go the distance.

The 11-5 odds for a draw in normal time look tempting, and the 11-10 odds for Belgium to reach the final don't look too bad either.

As in the previous semifinal, a former winner of the tournament (England, in 1966) is pitched against a team who has never played in a World Cup final before. England and Croatia have only met seven times, and the Three Lions have the upper hand with four wins, having won their last two matches against Croatia by an aggregate scoreline of 9-2.

However, Croatia did record two wins against England in 2006 and 2007,  which prevented their opponents from qualifying for the 2008 European Championships.

In my earlier Sputnik piece on World Cup "dark horses" I flagged up Croatia's 40-1 odds.

Their best performance in the tournament to date was their 3-0 second half demolition of Argentina in the group stage, which was really impressive. They’ve not really been as good since, but they have shown admirable durability in going the distance in both the last 16 tie with Denmark and in Saturday’s equally draining quarterfinal battle with Russia.

© REUTERS / Henry Nicholls
Breaking Bad: Top 10 VIDEOS of England Fans Rampaging After World Cup Wins
The question now is have those last two games left their mark? England, by contrast, never really had to dig too deep in dispatching a disappointing Sweden, which looked tired in Samara on Saturday. England fans will be hoping that for Croatia the semifinal will be one match too far, and that the younger legs of the Three Lions will prevail. But even if Croatia don’t have the same fizz that it did in the group stage, it is still a very dangerous opponent. As I noted earlier, they have one of the best midfielders in the world.

Luka Modric often looks out on his feet, but then he picks himself up and makes an amazing run, or as against Argentina scores a wonder goal. If we forget about the "dead rubber" game against Belgium in the group stage, Croatia will be the best team England has faced in Russia so far. To beat it, England will have to improve further, but there’s every chance it can do that. Croatia has conceded four goals so far, and none have come from teams trying to pass the ball into the net.

Iceland scored from a penalty (following a handball). Denmark from a long throw. Russia scored from a long range strike and a free kick. England must try and get as many crosses in as it can — and shoot on sight. At the back, they don’t want to play too much football either, with Croatia’s crucial first goal against Argentina coming after back pass confusion between a defender and the goalkeeper. Modric closed down a Russian defender who was too relaxed on Saturday and that might have resulted in a goal attempt under different circumstances. Colombia let England off the hook when dithering on the ball nine minutes from time led to a three-on-two situation. The Croats might not be so forgiving.

England is the bookies’ favorite to win, and all things considered, you’d have to fancy them to make it to the final. But the margins are likely to be very tight.