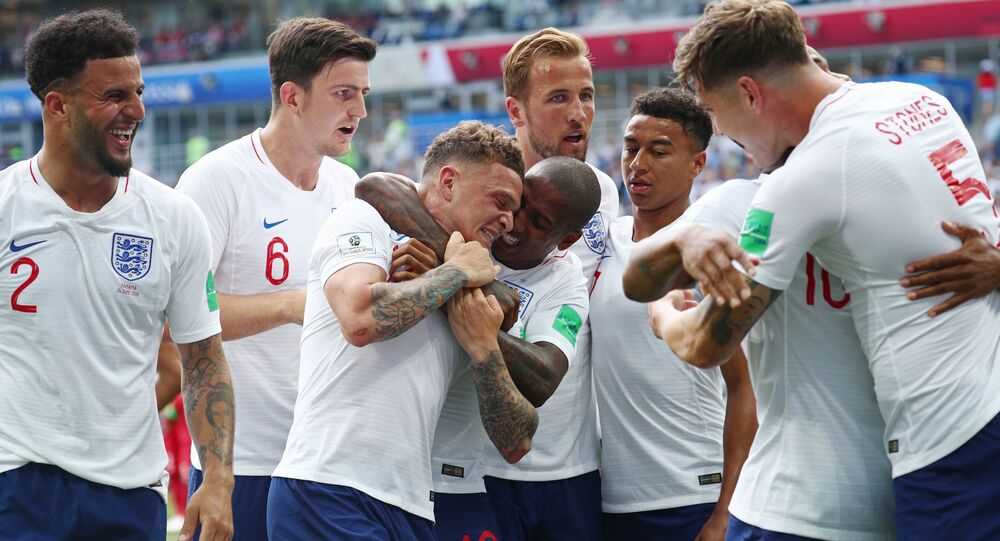 England’s 6-1 thrashing of Panama in the World Cup has left Three Lions fans dreaming of their team lifting the trophy for the first time since 1966.

Newspaper headlines have been euphoric- but amid the excitement, we should not forget that if certain people had got their way, England would not be playing in Russia this summer, and all chance of World Cup glory would be gone.

Let's go back to March. Then, a number of politicians and media commentators were calling for a World Cup boycott.

© Sputnik / Maud Start
Everyone is a Winner at FIFA World Cup 2018
MP Ian Austin told the Express and Star: "It's clear to me that Putin wants to use the World Cup in the same way that Hitler used the 1936 Olympics. We have to ask ourselves whether we are prepared to be involved in supporting a tournament that Putin wants to use to boost his image and to gloss over the abuse of human rights and the corrupt dictatorship he is responsible for."

Austin also played the "safety card," saying: "It worries me that Russia is not a safe place for either the team or England fans to visit."

He reiterated his "Don't Go to Russia" message on the BBC's Daily Politics show on 23rd March.

Austin's views were shared by newspaper columnist Stephen Glover. Writing in the Mail on 13th March, Glover called on the British Government to try and persuade the Football Association to withdraw from the World Cup.

"I'm glad Prince William has already indicated that he won't be going to watch any of England's matches. But his absence- and the mooted refusal of officials not to go to Russia- will not of themselves constitute and adequate protest. Everybody must stay away."

Glover acknowledged that withdrawing England from the World Cup "would create enormous disappointment for our footballers and many fans" — but added that some would be relieved "because they don‘t have to watch the almost inevitable humiliation of England‘s national team." I wonder if Glover was watching yesterday as England recorded their biggest ever World Cup win.

Other Parliamentarians meanwhile mooted the idea of the World Cup being either postponed or moved. "I would like to see a parliamentary debate on whether concerted Government action together with other countries to postpone the World Cup or move it to another venue would be the right way to go," said John Woodcock.

Stephen Kinnock called for a "coordinated approach to FIFA to discuss moving the World Cup to 2019 and having it hosted in another country or countries."

Again, if that had happened, there would have been no England 6 Panama 1 yesterday.

It’s currently England 6 Panama 0. If England go on & win this World Cup — which is perfectly possible given how open it is- we shouldn’t forget those NeoCon calls for us to boycott the tournament in furtherance of their obsessive anti-Russian crusade. #WC18 #ENGPAN

The trigger for the "Boycott the World Cup" calls in March came from the Salisbury poisoning case. But Russian involvement in the mysterious event was not proven- and still isn't. The old principle of innocent until proven guilty was thrown out of the window, by those who put the geopolitics before the hard evidence.

© AFP 2021 / Ahmad Abdo
'That Boy is Fine!' Twitter Drools Over Jordan Prince After World Cup Photo
Of course, it's legitimate to criticise Russia and its leadership, when they need criticising. The problem is that much of criticism of Russia today in the west is not factually based. It usually involves the regurgitation of unproven allegations. Conspiracy theories are fine- so long as they have Russia —and President Putin as the villain.

Far from being "unsuitable," Russia deserved to host the World Cup this summer. It is the largest traditional football nation, that up to 2018, had never hosted the tournament. FIFA got the decision right.

Attempts to sabotage the tournament for geopolitical reasons are wrong. And very unsporting. I have major issues with US foreign policy but I did not call for a boycott of the 1994 World Cup held in the US, and I won't — God willing — be calling for one when the US (and Canada and Mexico), hosts the World Cup next in 2026. Let's keep politics out of football, and enjoy the World Cup for the festival of internationalism which it was always meant to be.

To his credit, England manager Gareth Southgate gave the "Boycotters" short shrift. "I spoke to the players a couple of days ago and there's no suggestion we won't go to the tournament. The thing that's uppermost in our mind is security and safety and there are no concerns about that," he said in an interview on 23rd March.

He went on: "I was in Russia for the Confederations Cup. It was an incredible atmosphere in the stadiums. The training grounds and facilities were excellent. I've spent some time in Russia and felt incredibly comfortable there."

How foolish the "Let's not go to Russia brigade" look now, with the World Cup already being hailed as one the best ever. There have been some wonderful matches played out in fantastic, state-of-the-art stadiums.

READ MORE: Sorry Russophobes and Neocons, the World Cup in Russia is Off to a Flyer

The "safety fears" that were expressed by those wanting England to pull out of the tournament have — at least up to now-not been realized. On the contrary, England fans have been saying just how much they've enjoyed being in Russia, and how friendly the welcome has been.

The England fans I've met in Volgograd so far are absolutely loving it. "It's the opposite of what we expected, everyone has been amazingly welcoming. Last night was brilliant — couldn't ask for a better start to a world cup trip".

The sad thing though is that all the negative propaganda surrounding the World Cup has had an impact. It was reported that only 34,000 tickets had been sold to England fans- compared to over 51,000 in Brazil four years ago.

Colombia, Peru, Argentina and Mexico have all brought more supporters to Russia than England.

© Sputnik
There’s More to World Cup Than Football: Get a Load of These Baubles!
The England fans who stayed at home have missed out on two memorable victories. It's the first time the Three Lions have won their first two games at the World Cup since 2006. Yesterday's 6-1 trouncing of Panama was their biggest ever World Cup win, and the first time England have scored four goals or more in a World Cup match since the epic final with West Germany in 1966.

Tottenham Hotspur hot-shot Harry Kane, the new national hero, became the first England player to score a hat-trick in the World Cup since Gary Lineker in 1986, and only the third of all time.  It's still only early days and Tunisia and Panama are hardly great teams. But in a very open tournament where the "Big Guns" have looked far from convincing,  England's young, talented side, with their intelligent, tactically astute manager, must have as a good a chance as any of lifting the trophy.

F.C. England might well win this, but we've only seen a late win over Tunisia and an expected defeat of little Panama. The Belgium game should give more insight.

The competition does look wide open though, best chance in decades #WC18

What will the boycotters say if England does win the World Cup in Russia? And what will fans who didn't go- because they bought into the negativity promoted by politicians and sections of the media- feel like?