We’ve almost reached the end of the first round of Group matches of the 2018 World Cup in Russia. What conclusions can we draw from the early action?

Firstly, the 'dark horses' we identified last week, in our final preview column, have started the tournament well. Switzerland drew with Brazil, Portugal held Spain in a 3-3 thriller, Russia thrashed Saudi Arabia 5-0, and there have been wins too for Uruguay, Croatia, and Sweden. At the same time, some of the more fancied teams who generally do well at World Cups have been disappointing. A lackluster Germany lost to Mexico, Argentina was held by Iceland and France only edged past Australia.  It’s important though not to over-react to these first group matches. On quite a few occasions eventual World Cup winners have been out of the starting blocks slowly. Spain, for instance, lost their first match to Switzerland in South Africa in 2010, but still lifted the trophy. 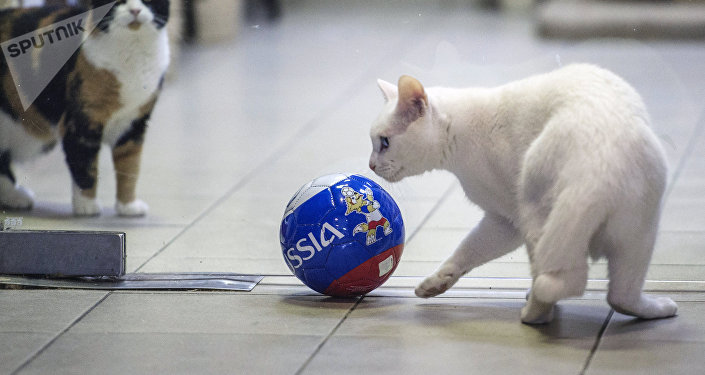 © Sputnik / Alexander Galperin
FIFA World Cup Oracle Cat to Predict Winner of Match Between Russia, Egypt
Quality-wise, the best game we’ve seen so far was the 3-3 draw between Spain and Portugal- a match that is likely to be unsurpassed in the entire tournament.  At the time of writing Senegal has yet to play, but it’s been a poor week so far for the African teams playing in Russia, with Egypt, Morocco, Nigeria and Tunisia all losing their first games- and only Tunisia finding the net (and that was following a soft penalty decision).

In Group H, Belgium, (identified here as a good each-way bet for the tournament)and England, already look set for the knockout stages after opening round victories, but most of the other groups are still too tight to call.

Looking ahead to the second round of matches, a few, in particular, catch the eye. Germany needs to bounce back and beat Sweden in Sochi on Saturday night- but the Swedes, who finished ahead of The Netherlands in qualifying and defeated Italy in the playoffs without conceding a goal, will be no pushovers and there could be some nervous moments for Joachim Low's men. Argentina v Croatia on Thursday in Nizhny Novgorod is another intriguing encounter,  as indeed is the other Group D clash, between Nigeria and Iceland.

It’s been called the Olympics of Flat racing and you can easily understand why. Royal Ascot consists of five days of the very top sport with equine stars drawn from countries across the world all competing for glory at the Berkshire racetrack.

Day One (Tuesday) features no fewer than four Group One contests. Benbatl and Rhododendron look the likeliest winners of the Queen Anne at 2.30, with marginal preference for the former, who’s already a Royal Ascot winner, and whose trainer Saeed bin Suroor, has won the race seven times before.

© REUTERS / Jason Cairnduff
The Sputnik Intelligent Punter's Guide to the 2018 Grand National
In the Coventry Stakes at 3.05, you’d expect jockey Ryan Moore to get a good tune out of the favorite Sergei Prokofiev, while in the King’s Stand Stakes narrow preference is for US speedster Lady Aurelia (who‘s won at the meeting for the past two years) over Battaash. Spanish raider Finsbury Square could go well at an each-way price; his trainer won the race ten years ago with Equiano. Seven of the last ten winners of the St James’s Palace at 4.20 have finished in the first two in the 2000 Guineas which means that fairytale horse Tip Two Win- who finished ahead of subsequent Derby winner Masar at Newmarket, could be the value at 11-2.

Willie Mullins’s record in the Ascot Stakes is excellent and Chelkar is the selection in the 5.00 (Coeur De Lion each-way), while Spark Plug, drawn in the same berth as last year’s winner, is a speculative each-way choice in the 5.35.

On Wednesday, Cracksman is hard to oppose in the Prince of Wales‘s Stakes (4.20), while in the Royal Hunt Cup (5.00) Mukalal and Gabrial are two high-drawn outsiders who might out-perform their odds.

READ MORE: Salah in, Dzagoev out: Russia vs Egypt at FIFA World Cup

Looking further ahead, on Thursday, Order of St George goes for his second victory in the Gold Cup (4.20) and is the one they all have to beat.  Torcedor, who was only beaten half a length by Order of St George at the track in October, could prove to be the biggest threat. On Friday, 1000 Guineas heroine Billesdon Brook looks the one to be on in the Coronation Stakes (4.20) while Mark Johnston’s Sofia Rock, a facile winner at Haydock last time, will be of interest if lining up in the Duke of Edinburgh (5.35).

The Sputnik Intelligent Punter's Guide to the 2018 Grand National