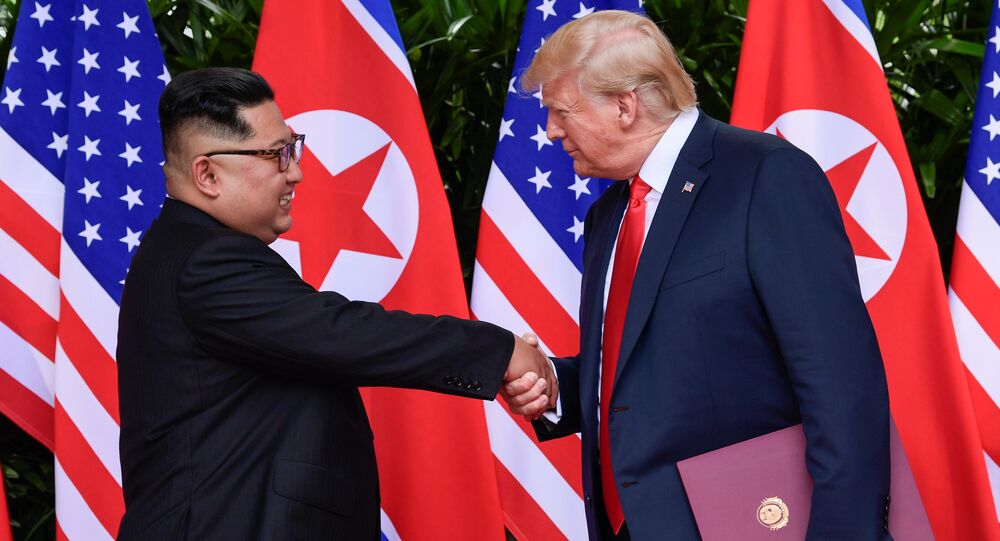 Trump Rises to Occasion for Peace

Stranger things can happen. Maybe – just maybe – the United States and North Korea can find a way towards securing a lasting peace – despite being sworn enemies for the last seven decades.

Recall how only a few months ago, President Trump and Chairman Kim were threatening to go to war. Trump infamously had said at one point that he was prepared to "totally destroy" North Korea.

All the bellicose rhetoric instantly faded when the two leaders met this week in Singapore in what was a truly historic meeting. No serving US president has ever met a North Korean head of state.

At 33-years-old, Kim Jong-Un achieved something that his father Kim Jong-Il and grandfather Kim Il-Sung might have only dreamed about.

The cordial handshakes, smiles and friendly words make it possible for people of the world to hope for a peaceful outcome to the long-running US-North Korean conflict.

Still, there is a long way to go if peace is to be achieved. But what holds promise is the mutual attitude of the two leaders.

Kim Jong-Un spoke of "putting obstacles and prejudices of the past behind".

© REUTERS / Jonathan Ernst
Trump Says Got Along With Kim From Beginning of Meeting (VIDEO)
Trump spoke of a "new history" and how "adversaries can become friends".

The American president isn't known for eloquence, but one thing he said did stand out: "It is very easy to make war, but only the most courageous can make peace."

Both men deserve credit for taking the bold steps towards their summit, which was organized in a matter of weeks following a spontaneous exchange of letters. But Trump perhaps deserves a special mention for praise.

From the moment the two leaders came face to face, the American president showed a willingness to give the North Korean counterpart respect and parity of esteem. That marked a major change in attitude on the American side. Gone was the American arrogance and imperiousness.

Both men met halfway as they strode towards each other. It was only a fleeting glimpse, but Trump was the first to stretch his hand out to shake Kim's.

The American president's readiness to be the first to reach out was repeated later at a signing ceremony.

It was highly significant too that as a backdrop to the initial historic handshake there were neatly folded American flags sitting alongside an equal number of flags belonging to the Democratic People's Republic of Korea (DPRK).

Technically, these two countries are still at war following the 1950-53 Korean War when a full armistice was never signed. Officially, Washington has continually refused to acknowledge the sovereignty of North Korea. The latter has been vilified as "an axis of evil" by past American presidents.

Yet, here were the current leaders standing together in cordial embrace as equals.

Many observers, including this author, expected that the Singapore summit would be a spectacle of the American side using it to bully North Korea into a surrender.

© REUTERS / Susan Walsh/Pool
From Olympics to Singapore: Here's the Long, Bumpy Path That Led to the Trump-Kim Summit
Only last month, the summit was abruptly called off after North Korea bridled at provocative comments made by Trump administration officials comparing the approach to the country with how the US overthrew Libya's government. The American agenda seemed to be one of demanding capitulation by Kim Jong-Un.

Trump and his officials had also used high-handed rhetoric about the need for "complete, verifiable, immediate denuclearization" by North Korea which was tantamount to Washington wanting unilateral disarmament.

Recall too that the Trump administration had sneeringly referred to North Korea as "a murderous dictatorship".

Well, none of that supercilious American attitude was on display when Trump finally met Kim. The two men looked comfortable and relaxed, and evidently treated each other with respect.

If anything, Trump was the more forthcoming. His ready handshakes were matched with an eagerness to make small talk as the two leaders strolled together between formal talks.

Could it be just cynical gesturing of goodwill by Trump?

Handshakes and smiles are one thing. But there was also substance to Trump's avowed commitment to finding a peaceful resolution.

Not only were the anticipated American demands for unilateral North Korean denuclearization abandoned. Trump went further and said that he was going to call an end to US war games on the Korean Peninsula. He even described those annual military drills as "provocative" and "inappropriate".

Trump also explicitly pointed to a future withdrawal of all US troops from the peninsula.

© REUTERS / Jonathan Ernst
US Senators Troubled by Ending US-S Korea Military Drills After Kim Summit
That is a crucial concession from the American president. For decades North Korea, as well as China and Russia, have protested the US military presence in the region as being provocative and destabilizing.

If, and it is a big "if", Trump follows through on his offer to withdraw US military forces, then there is a real prospect that a comprehensive peace deal can be forged.

Admittedly, the American side still sounded tough on the issue of sanctions. Trump said there would be no lifting of the crippling economic embargo on North Korea until denuclearization was achieved.

Nevertheless, it was equally significant that Washington, at least under Trump, appears to be no longer demanding an immediate decommissioning of North Korea's nuclear arsenal.

During his press conference following the meeting with Kim, the American president talked about nuclear disarmament as being a long process. This was also in the context of US troops withdrawing from the Korean Peninsula. In other words, a reciprocal give-and-take.

That gradual process of denuclearization was also mentioned this week ahead of the Singapore summit by the US Secretary of State Mike Pompeo. Pompeo said too that the US would give "unique security guarantees" to North Korea, which seem to have been delivered by Trump vowing to withdraw forces.

When Trump hastily left the G7 summit in Canada last weekend, where he had sparred with other Western leaders, some commentators averred that the American president was using that argy-bargy session as a warm up for an aggressive encounter with Kim Jong-Un in Singapore.

Not a bit of it. Trump surprised. He rose to the occasion for world peace by offering a gracious hand of friendship to the North Korean leader. The American leader showed maturity and statesmanship.

Most importantly, the US president had the humility to treat North Korea with respect and reciprocation to search for genuine peace.

It remains to be seen if Trump will be over-ridden by deep state military planners within Washington as to the future steps with North Korea. Will they scuttle his plans to call off US military drills, for example? Asia-Pacific is a key strategic region that US imperial planners are not going to let go of easily, more especially with regard to perceived geopolitical rivals, Russia and China.

That said, however, the summit in Singapore this week appears to have been a solid step towards peace. Primarily because the American side decommissioned its arrogant, bellicose attitude.