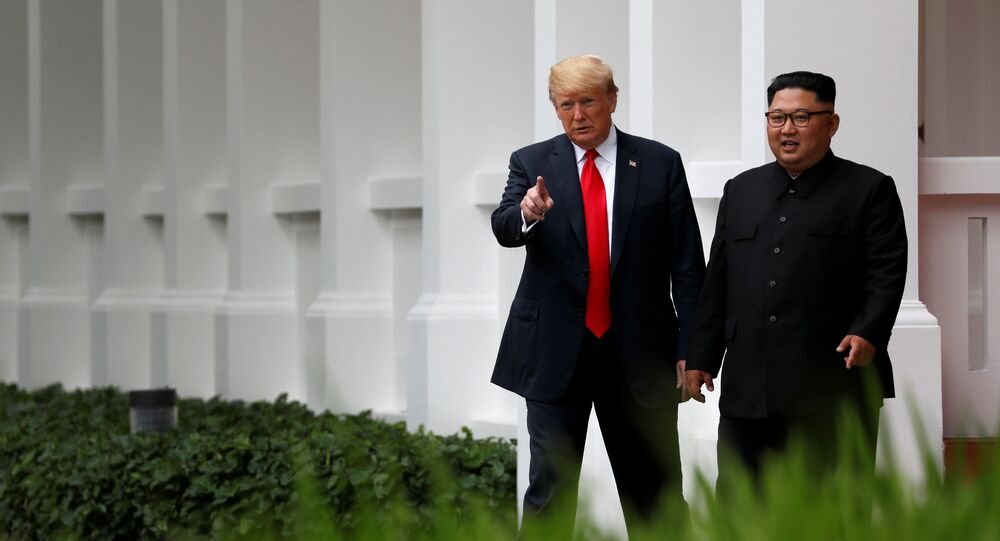 The Oxford dictionary definition of the adjective ‘momentous’ is as follows: ‘Of great importance or significance, especially in having a bearing on future events.’ It is therefore a word that could have been invented with the Singapore summit between Donald Trump and Kim Jong-un in mind.

Peace is desirable anytime and for all time. In the affairs of men, if I may be permitted a brief attempt at ascending Shakespearean heights, peace is one of the last frontiers humanity is yet to conquer. And these tumultuous and tempestuous times, the lack of peace — which means to say not merely an absence of conflict but instead an absence of the threat of conflict — hangs over all of us like an incubus.

Personally, I do not recall having ever experienced the sense of dread I experienced over the Douma crisis in April. It really did seem that we were perched on the precipice of World War III. I like to believe, and sincerely hope, that having emerged from the crisis the world did so awakened to the folly of relegating diplomacy to the back of the queue when it comes to international affairs and disagreements, and pushing the military option to the front.

Which brings us to the presidency of Donald J Trump.

In Trump the world has itself a US president who is more worthy of serious character study by behavioural scientists, even perhaps psychiatrists, than any other — which in itself I realise is a bold statement considering the previous incumbents of that office.

© AFP 2021 / Saul Loeb
Historic Kim-Trump Summit Highlights: Handshakes, Body Language, 'Major Changes'
Capricious, unpredictable, unstable, narcissistic, temperamental, mercurial — Trump has been justifiably described as all of the above since entering the Oval Office as the leader of the world's most powerful country with no prior political experience. And yet and yet…isn't it he rather than Obama or Clinton or Bush who has succeeded, while in office, in pulling off such a momentous event as the first sit down face-to-face meeting with the leader of the DPRK since the state was established in 1948?

And therefore does his success in doing so suggest evidence of method in his apparent madness?

Certainly more and more are beginning to come round to this assessment. And considering the abrupt shifts in tone and tenor that he's continually engaged in — threatening conflict and war one day, talking peace and stability the next — why wouldn't they?

But here's the thing: while unpredictability and caprice may be an attribute in the world of business when it comes to negotiating and clinching deals, in the world of geopolitics involving matters of war and peace it carries with it the potential for catastrophic consequences.

In answering our earlier question regarding Trump's success in pulling off a face-to-face meeting with North Korea's Kim Jong-un, let us be clear: credit for success in establishing this peace process belongs entirely to Kim Jong-un and South Korean President Moon Jae-in. In fact the only reason Trump is in Singapore, basking in the credit, is down to the fact he really had no choice in response to the Koreans taking the initiative in embarking on positive and constructive dialogue. Thus the Trump administration is tailing this process not spearheading it.

© REUTERS / Jonathan Ernst
Trump Says Got Along With Kim From Beginning of Meeting (VIDEO)
The million dollar question is will it attempt to sabotage it?

North Korea's survival as an independent state, given what it's been through — the asphyxiating isolation in which it has been forced to exist over decades — has been remarkable. This isolation has come at a heavy price despite the brave face the country's leadership has maintained for the consumption of its enemies, particularly Washington.

In December 2017 the UN's Human Rights Commissioner Zeid Ra'ad Al Hussein outlined the grim reality of life in North Korea for millions of its people under the most brutal sanctions regime ever imposed on a state by the UN since the one imposed on Iraq between 1991 and 2003. Mr Zeid went so far as to recommend that the Security Council conduct an urgent investigation into the impact of the sanctions on the people of the DPRK and find ways to minimize their "adverse humanitarian consequences."

No matter the obfuscation and attempts to beguile people into believing otherwise, those adverse humanitarian consequences were precisely the effect intended by those responsible for imposing sanctions, turning them into a grotesque experiment in human despair. And let us not mince words: the only reason North Korea was hit with such punitive and cruel sanctions was because of its refusal to give up its independence and submit to the writ of Washington.

As for those who declaim against anything which smacks of an attempt to let the DPRK leadership and government off the hook when it comes to the desperate plight of its people, this conforms to an exercise in treating symptoms as causes and thus defending the indefensible when it comes to the brutal and unremitting role of the Empire in sowing misery and mayhem.

The economic, social, and political development of any given state is inextricably linked to the external pressure arrayed against it. As such, berating a given state over its lack of development in these areas while it exists in the crosshairs of imperialism is like grabbing someone by the throat and berating them for not breathing properly. In sitting down to discuss peace with an adversary which has been responsible for the biblical suffering of its people throughout his country's existence, Kim Jong-un does so in response to the suffering of his people.

He more than anyone will be aware that there is a marked difference between a Carthaginian peace, a Pax Americana, and a peace agreed between equals in a spirit of reconciliation and good faith. Pessimism dictates that the former is about to be imposed on North Korea. Optimism hopes that the South Korean leadership in Seoul possesses the requisite determination and will to refuse to accept anything less than the latter.

Whatever the outcome — and here let us hope that this summit and ongoing peace process ends in peace with security for the North Koreans — the obstacle to normalisation on the Korean Peninsula has never been Pyongyang it has always been Washington.