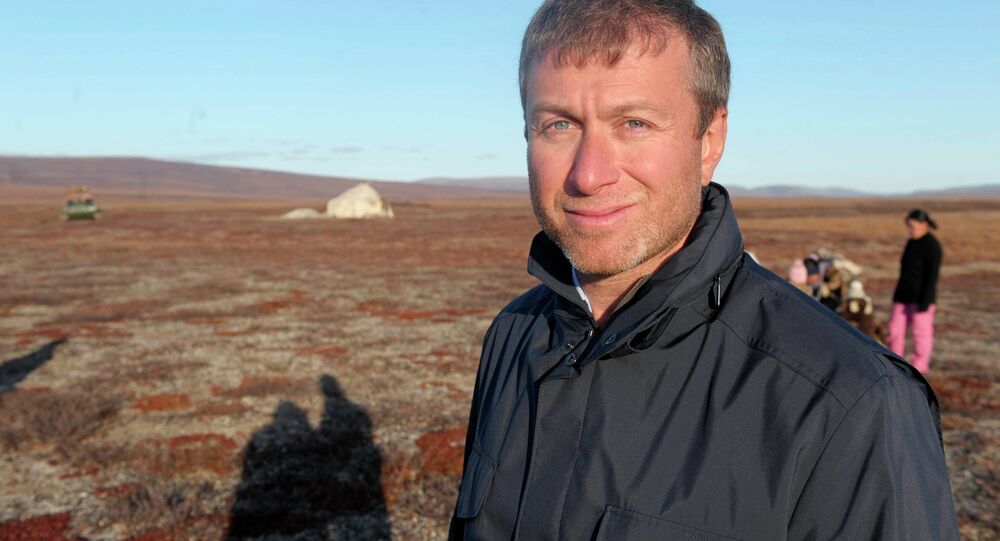 'Red Rom Throws his toys out of the Prem' screams the very funny headline on the front page of the best-selling newspaper in the UK, The Sun, today.

They are of course referring to Roman Abramovich's decision not to build Chelsea's new football stadium. But the truth is, this is no laughing matter and again the Political "Chuckle Brothers" team of Theresa May and Boris Johnson have scored another spectacular home goal.

Why on earth were the Home Office dragging their heels on extending his visa, when this man has already invested millions in the UK and turned Chelsea from also rans to a major European side and as a by-product created hundreds of jobs?

© Sputnik / Alexei Kudenko
UK Did Not Ask Russia's Abramovich to Explain Origin of Capital – Source
Why did they delay rubber stamping his application and put in jeopardy this one-BILLION-pound redevelopment which would have created hundreds, if not thousands of construction and ancillary jobs?

The answer of course is Russophobia. Quite simply he has been caught up in the Skripal propaganda war.

I doubt whether Roman has ever been to Salisbury (have they got a football team?) and even if Johnsons ludicrous suggestion that Putin was involved in the poisoning was correct, what has that got to do with Roman or Chelsea?

The Sun are of course right to state in the article that, "There is no suggestion that Abramovich is responsible for any wrongdoing, however he is the first oligarch caught up in the new vetting process following the attempt on Russian double agent Sergei Skripal's life."

So basically, he is guilty of being a mate of Vladimir Putin who of course Boris has accused of being involved in the Skripal case even though Johnsons narrative has more holes in it than a piece of Swiss cheese.

READ MORE: Yulia Skripal Speaks — But There Are Still More Questions Than Answers

I can't really be bothered to deconstruct that nonsense again, suffice to say I'm still not convinced that, in Sun speak, it "Woz the Russians wot did it!" and I certainly don't think that vetting process decisions should be based on an as yet far from proven case of Russian government involvement in the Skripal's poisoning.

© AP Photo / Matt Dunham
MI5, May and Johnson Keeping Brits in the Dark
I thought, right from the beginning of the Skripal saga that Johnson has been overdosing on a box set of the BBC's thriller, McMafia and it would appear the writer of the novel the series was based on, Misha Glenny, agrees.

He told the Today programme on BBC Radio 4 in March that he, "doesn't buy the theory that former Russian spy Sergei Skripal and his daughter were poisoned by Russian President Vladimir Putin."

He continued with this statement, "It is a very important point because one needs to remember that when you have something like a spy swap this is a protocol deal between intelligence agencies. Although we think of them as thoroughly and always unscrupulous they (the intelligence services) have rules of the road — a sort of honour among thieves. So, it is very, very odd to see someone like Skripal being targeted like this."

He continued, "Until we have forensic evidence and proper circumstantial evidence to accuse the Russian Government or the FSB (the Russian intelligence agency) of being involved in this, is absolutely premature."

Did this stop Boris shooting his mouth off and kicking off the new cold war?  Of course, it didn't. The clown even managed to persuade other nations to kick out Russian diplomats/ spy's and now we have this attack on Russian investors who want to invest a minimum of 2 million into the UK.

Of course, the Skripal poisoning came at a very opportune moment for Boris as he was one of the prime backers of the UK version of the "Magnitsky Act".

The US Magnitsky Act was designed to punish Russian officials involved in the mysterious death in prison of anti-corruption lawyer Sergei Magnitsky in 2009. He had found millions of dollars' worth of tax fraud linked to the Kremlin.

Eventually this act was extended, by the USA, to cover all human rights abusers around the world.

It all sounds grand doesn't it?

Until you recall the story in the Sunday Times where it was revealed that the Tories have received donations of more than £820,000 from Russian Oligarchs since May became Prime Minister! To continue the football analogy that is surely a debateable offside decision isn't it?

© Sputnik / Alexei Filippov
'Engage But Beware': UK Foreign Minister Announces UK's Policy on Russia
I wouldn't mind so much if the "World Ethics Referees", Johnson and May, were playing the game on a level playing field but one has to ask if they are scrutinising the money flowing in from the butchers of Saudi Arabia?  Or how about the money from India? And let's look at that bastion of "Human Rights and democracy", China.

This is just virtue signally and hypocrisy of the highest order and is on the same nonsensical level of Tony Blair's Labour government, who when they were in opposition, declared they would have an ethical foreign policy but then, when in power, sent British troops to conflicts in Kosovo, Sierra Leone, Afghanistan and Iraq! That's before we also consider their involvement in rendition and torture with the USA.

For the record, I don't blame Roman for putting the development of Stamford Bridge on hold for what he says is due to "an unfavourable investment climate". In other words, why would I want to invest in a country where I am not welcome and would be prevented from working, or have my assets seized on real or alleged, or dare I say it, trumped up charges, or even just because of who I am mates with?

Now Roman has withdrawn his application for a UK visa and has instead decided to go to Israel with his trillions and has been granted Israeli citizenship immediatlety.

The irony of course is, with his Israeli passport, he will be allowed to visit the UK for up to 6 months a year without a visa but of course he will not be allowed to work here. Not that will really affect him as he has never held a paid or official position at Chelsea anyway!

I reckon that's a 6-0 away win to Roman Abramovich and the whole of the UK is on the losing side.