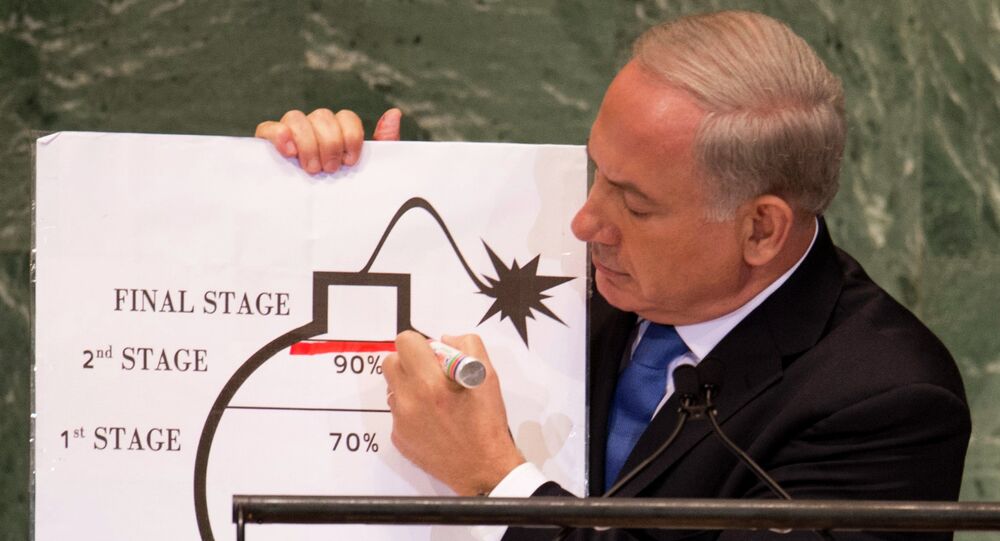 The Coming War With Iran

Benjamin Netanyahu’s animus towards Iran has long been a driving obsession, occupying his mind before his goes to bed at night and when he wakes up in the morning.

During what can only be described as a bizarre example of coup de théâtre in Tel Aviv on April 30th — billed officially at a press conference — the Israeli Prime Minister left no stone unturned in impugning the Iran nuclear deal, signed during Obama's tenure in the Oval Office, claiming that "Iran did not come clean about its nuclear program."

Netanyahu's case against the Iran nuclear deal, which he claims is now irrefutable based on a large cache of classified documents stolen from the Iranians by Mossad, is — it should be stressed — yet to gain the support of most of its signatories, specifically Russia, France, the UK, Germany and China. It is supported by the Trump administration, however, with the President coming out in support of Netanyahu's claims during his own press conference outside the White House soon afterwards, right on cue.

Among his own remarks on Netanyahu's claims, Trump repeated what has been one of the few consistent positions of his presidency, asserting that the Iran deal is a "horrible agreement for the United States."

READ MORE: ‘Either a Liar or an Idiot’: Netanyahu’s Iran Claims Insult Integrity of IAEA

© REUTERS / Amir Cohen
Netanyahu Seeks to Prod Trump to Withdraw From Iran Nuclear Deal – Reports
What we have here evinces all the hallmarks of a ruse on the part of Netanyahu and Trump, two leaders currently engaged in a bromance that would scare the pants off your average ghost, what with their shared caprice and reckless disregard for international law. It is a ruse designed to up the ante when it comes to isolating and demonizing Iran, which combined with a recent bout of Israeli airstrikes against Iranian targets in Syria, describes at this point seemingly inexorable march towards a full blown regional conflict.

Making these gathering storm clouds even more concerning is that currently in Riyadh sits a leader, Crown Prince Mohammad Bin Salman, whose bellicosity towards Tehran is reflected in the hell Saudi Arabia has and continues to unleash upon men, women, and children in Yemen — a proxy war whose savagery has gone almost completely unremarked in the mainstream Western media. This is despite the fact that it could well be a prelude to the much more savage and destructive conflict that will ensue between Iran, Syria, and Hezbollah on one side, and Israel and Saudi Arabia, backed by a neocon-dominated Trump administration in Washington, on the other, should it come to pass.

Iran, a country with no extra-territorial ambitions, which has not started a war with any of its neighbours in generations, is now firmly in the crosshairs of Washington and its regional allies. Despite Tehran's considerable role in fighting and defeating Salafi-jihadi terrorism in Iraq and in Syria, Trump alleges that Iran is a major sponsor of terrorism. The President here is, of course, referring to Tehran's close ties to Hezbollah, the Lebanese resistance and social movement born in the ashes of Israel's invasion and occupation of southern Lebanon in the early 1980s.

© AP Photo / DEBBIE HILL
Israel Eyeing 'Regime Change' in Iran, Analyst Says
One man's terrorist, they say, is another man's freedom fighter — and with the IDF's penchant for shooting dead unarmed Palestinian civilians without compunction, legal or moral, where Israel and Hezbollah are concerned many will find it impossible to make the case for Israel.

Significantly, the momentous and truly historic peace summit the world witnessed on the Korean Peninsula between North Korea's Kim Jong-un and South Korea's Moon Jae-in, will likely not be replicated anytime soon in the Middle East. Not when the key regional actors include Benjamin Netanyahu, Mohammad Bin Salman and Donald Trump, men for whom war and conflict would seem more desirable and feasible than diplomacy when it comes to resolving their issues with Iran and its allies.

This being said, a sober and serious analysis of the region leaves little doubt that the regional conflict between the aforementioned blocs is already underway, and has been for some time. As far back as the Obama administration, in the years leading up to the Iran Deal in 2015, Washington was doing its utmost to neuter Iran's nuclear research program by nefarious means. US author and historian, Perry Anderson, reveals how the Obama administration "launched a massive joint US-Israeli assault on Iranian computer networks to cripple the development of its nuclear program. A blatant violation of what passes for international law, the projection of the Stuxnet virus was personally supervised by Obama."

It is also a fact that Israel's notorious intelligence agency, Mossad, has in the past assassinated Iranian scientists involved in the country's nuclear program — a program that the Iranian government has always maintained is solely concerned with meeting the country's domestic energy needs, thus freeing up more of its oil for export.

© AP Photo / Ebrahim Noroozi
Iran Vows 'Surprising' Response to Israel Amid Nuclear Deal Tensions
The uptick in aggressive rhetoric against Iran that we have seen, set alongside the celebratory scenes on the Korean Peninsula as peace and denuclearization beckons after many-many decades, it is entirely conceivable that if not before the Iranians now will be minded to actively embark on the pursuit of a nuclear deterrent, one that the Israelis already have in their arsenal.

Making a quick detour, the question of why certain countries are allowed their own nuclear deterrent and others not is one in whose answer we arrive at the reality of power politics as the arbiter of international affairs, rather than the UN Charter or international law.

The point is that the Iranians will be more than justified in arriving at the conclusion that the only reason peace has broken out between North and South Korea is because the DPRK managed to acquire its own nuclear missile capability.

Harsh logic maybe, but hard to refute all the same.

What is abundantly clear is that something somewhere has to give. Iran is being backed into a corner for no other reason than it refuses to bow to US hegemony, along with the fact that it acts as the main bulwark of opposition to Israeli and Saudi regional ambitions.

In his bestselling book, 'The Silk Roads', Peter Frankopan writes, "The world is changing around us. As we move into an era where the political, military and economic dominance of the west is coming under pressure, the sense of uncertainty is unsettling."