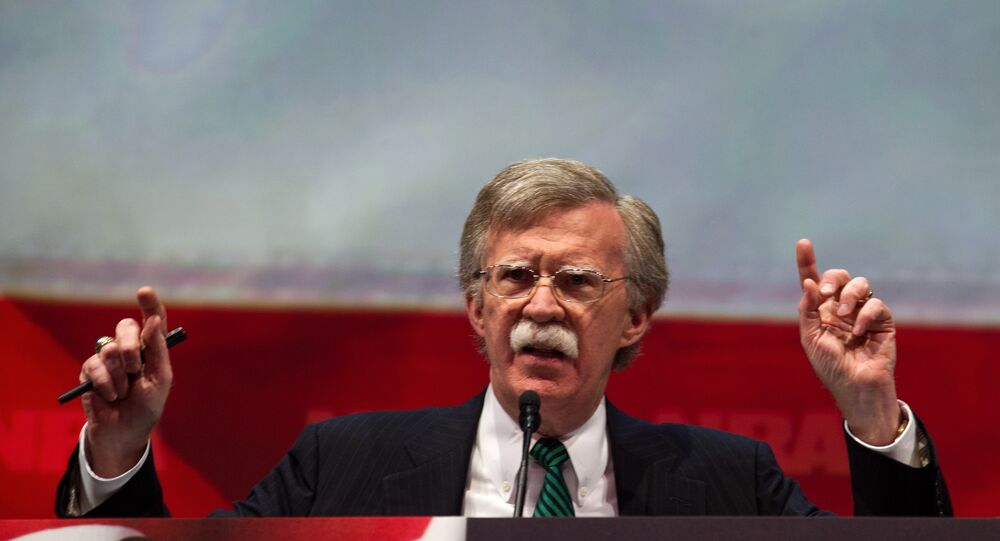 With John Bolton’s appointment as Trump’s new national security adviser, the circle closes on any remaining hope of the 45th President of the United States embarking on a different course from every other president that has preceded him in the Oval Office in recent years, when it comes to foreign policy.

A devoted disciple of the ‘bomb them to hell and ask questions later' school of US politics, Bolton's hawkish foreign policy credentials are so extreme he makes John McCain seem like Bambi by comparison. Nobody, for sure, would ever mistake him for Marcus Aurelius, the famed Roman emperor and Stoic who was legendary for his advocacy of restraint in all things, including war. For a man such as Mr Bolton restraint is blasphemy. After all, what's the point of amassing the largest and most destructive military in human history if you can't use it?

© AFP 2020 / Mike Theiler
'Hawk' of US Foreign Policy: Top-7 Things to Know About Future Trump's National Security Advisor John Bolton
When it comes to international law, for the likes of John Bolton this is for wimps. Real men and real countries bomb whom the hell they want when the hell they want, and screw the consequences.

Even worse than Bolton's appointment is the timing of it.

It comes just after the fifteenth anniversary of the start of the war on Iraq, involving the US and UK unleashing hell against Iraq and its people on the basis of we now know beyond doubt were lies.

In his capacity as US Under Secretary of State for Arms Control, Bolton was a key advocate of this illegal and imperialist war, thus making his return to frontline US politics in such a high profile role tantamount to spitting on the graves of the up to one million Iraqis who were killed as a consequence.

© REUTERS / Joshua Roberts
McMaster Out as US National Security Adviser, Former UN Ambassador John Bolton to Take Role
Yet despite the carnage and elemental suffering of the Iraqi people as a result of Bush and Blair's war, plunging the country into a sectarian bloodbath even though we and they had been assured that it would prove the catalyst for a new dawn of liberal democracy, Bolton continued and continues to defend it. In a 2015 interview he said, "I still think the decision to overthrow Saddam was correct." He then goes on to claim, with all the insouciance of an arsonist who has never seen a fire he didn't relish, that the disaster to befall the country and region afterwards was not connected to the war in 2003.

Bolton was appointed US ambassador to the United Nations by Bush in 2005. It was a decidedly strange appointment given Bolton's disdain for the institution and everything it represents, infamously asserting that there was "no such thing" as the UN and claiming that the US was the world's "only real power." For Bolton and his ilk, you see, US hegemony is the natural order of things, divinely ordained much as the Emperor Augustus erroneously perceived the Roman empire: "You cheer my heart, who build as if Rome would be eternal."

© AP Photo / Evan Vucci
‘A Scary Figure’: John Bolton as National Security Adviser Would Pursue War With Iran - Historian
The war on Iraq ripped the mask of democracy from both the US and its British ally to reveal hubris and mendacity. The moral sickness of regime change, added to a cultural attachment to the verities of US hegemony, produced a messianic drive to reshape the world according to the image cooked up by a group of crazed neocons in Washington, prime among them John Bolton, along with a British prime minister obsessed with establishing his own Churchillian legacy. They succeeded only in sowing chaos and carnage, which rather than destroy terrorism spawned its growth to a scale hitherto unimaginable.

British journalist Jonathan Steele in his book Defeat: Why They Lost Iraq, recounts an exchange he had with former Jordanian ambassador to the UN, Adnan Abu Odeh, just as US military forces were about to enter Baghdad in April 2001: "What's going on in Iraq now recalls 1258 when the Mongols entered Baghdad," the Jordanian averred. "It's also like when Britain arrived in Baghdad in 1918. Iraq had the first civilization in history which domesticated animals and sowed plants for agriculture. Now it's being re-colonized for the second time. We see a new type of colonization with a transformed mission. In the past, it was guns, ships, and priests. Now it's guns and the gift of democracy."

The war on Iraq and ensuing occupation ended in military defeat for Washington and London. Instead of advancing the cause of Western liberal democracy it merely exposed it as organized hypocrisy.

© AP Photo / Evan Vucci
Bannon to France's National Front: 'Tide of History Will Compel Us to Victory'
Yet despite the propaganda rolled out to justify turning Iraq from a functioning state into a failed state, the war was never about democracy. It was about seizing control of a major oil-producing state in the heart of a region long considered the rightful property of the self-appointed rulers of the world in Washington. As US author and academic Michael Macdonald writes, "The United States went to war — and failed to win the war — because regime-changers deluded themselves into believing they were the world and the world was better for it."

Whereas a key tenet of Trotskyism is a permanent revolution, a key tenet of neoconservatism is permanent destruction, with Bolton's appointment by Trump as national security adviser akin to spitting on the graves of the Iraq War dead. It marks a significant regression when it comes to US foreign policy, confirming that in Washington the neocons really have taken over the asylum.

US National Security Agency Reportedly in Jeopardy After Its Cyberweapons Stolen

China is 'Not a Threat' to US National Security, but to Its Global 'Dominance'

US Defense Attache in China Appointed to National Security Council