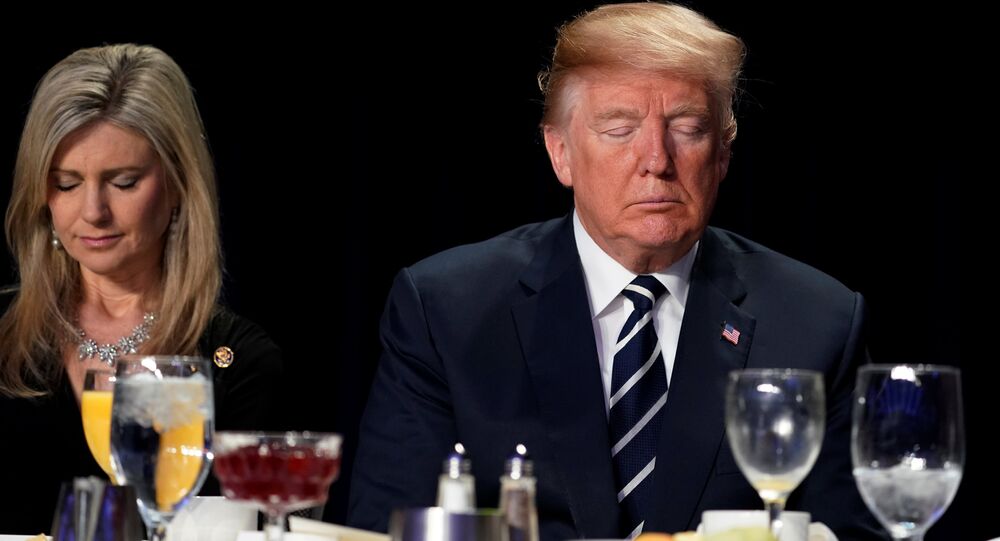 Donald Trump's trade war puts him at odds with Goldman Sachs which is one of the most powerful financial institutions in the world. Goldman Sachs, also known as the "vampire squid" is not only too big to fail, but it's also too big to lose.

The "Goldmanites" have few things in common with the former employees of other financial institutions, and that is because the "Goldmanite" community functions more like an influence network or a quasi-secret political club.

However, the gargantuan influence of the Goldman Sachs alumni is an open secret. In 2008 the British newspaper The Independent published a list of influential "Goldmanites" under the title "How Goldman Sachs took over the world."

Suffice it to say that a short and woefully incomplete list of "Goldmanites" in positions of power would include Hank Paulson, Treasury secretary under George W. Bush; Mario Draghi, Head of the European Central Bank; Robert Zoellick, ex-president of the World Bank and former deputy to Condoleezza Rice at the State Department; Robert Rubin, US Treasury secretary under Bill Clinton; Joshua Bolten, campaign aide and chief of staff under George W. Bush; William Dudley, president of the New York Fed and vice-chair of the Federal Open Market Committee (FOMC).

Goldman Sachs owes its infamous moniker, "the vampire squid," to Rolling Stone's Matt Taibi, who published an epic takedown of Goldman Sachs in the aftermath of the global financial crisis:

"The world's most powerful investment bank is a great vampire squid wrapped around the face of humanity, relentlessly jamming its blood funnel into anything that smells like money. In fact, the history of the recent financial crisis, which doubles as a history of the rapid decline and fall of the suddenly swindled dry American empire, reads like a Who's Who of Goldman Sachs graduates."

The obscenely powerful global bank is the embodiment of the "deep state" or the "Washington swamp" because its influence easily transcends party lines, and because the "Goldmanites" control the US regardless of the party affiliation of the current president. Trump was supposed to be the candidate who would "drain the swamp," but he ended up surrounded by the people from the swamp, who wielded significant influence over his campaign and even his presidential economic policy.

To a certain extent, Trump was the "Goldman's candidate." Consider the following: Steve Bannon, the strategist who played a crucial role in Trump's victory, is a former Goldman Sachs banker. Trump enlisted former Goldman Sachs president Gary Cohn as his chief economic adviser. He also gave the keys to the government's coffers to another "Goldmanite" Steven Mnuchin, who became the US Treasury Secretary. It all went smoothly for a while.

The "vampire squid," along with other American financial institutions, cheered for the Trump tax reform plan, but then it all went downhill because of Trump's great global trade war ambitions. For Goldman Sachs, the bank that epitomizes globalization and basically worships the concept of free trade, it is literally impossible to support a protectionist president.

When Trump decided to impose tariffs on steel and aluminum imports from the European Union, China and possibly Canada, the "vampire squid" research desk published a viciously negative report on the president's trade policies. Bloomberg published the report's findings under the headline "Goldman Sachs Rips Into Trump's Tariffs Plan."

The report stated that "By imposing across-the-board tariffs to all steel and aluminum imports, the larger economic impact is on Canada, Mexico and the EU, and it ironically eases the economic impact to China and Russia."

Gary Cohn, the man credited as being the co-author of Trump's economic policies, chose to abandon ship and handed his resignation to Trump.

According to CNBC, "the former Goldman Sachs president had strongly opposed tariffs."

Now, there is only one notable "Goldmanite" left on the president's team, but he has a huge influence on the US economy. Steven Mnuchin controls the US Treasury. His position on tariffs and trade wars is quite ambiguous, so there may be hope that Trump somehow converted the "Goldmanite" into a devout "Trumpist", but the chances are slim. Most likely, Mnuchin will become one of the numerous anti-trumpists that are actively operating inside the current administration and sabotaging the president's efforts on a daily basis. Maybe Trump can get rid of him, but the markets will throw a veritable tantrum if the Wall Street darling is ever kicked out of the administration.

The US president is either close to losing or has already lost his most powerful ally that played a critical role in his political survival. It is very likely that the unseen web of "Goldmanite" influence was Trump's secret defense system that shielded him from attacks masterminded by the political establishment and even the US intelligence community.

Can he succeed alone? Can he succeed if all the influential "Goldmanites" of the world turn on him? I would root for the underdog, especially an antiglobalist underdog, but the rational bet would be on the "vampire squid".

The US is not a republic anymore and it doesn't have a functional democracy. Right now the US political and economic system looks like a rigged casino, where the odds are always stacked against the average Joe. Sadly it looks like the "vampire squid" is running the casino, and I bet you've all heard the old Las Vegas adage, "The house always wins."

The views and opinions expressed by Ivan Danilov are those of the columnist and do not necessarily reflect those of Sputnik.