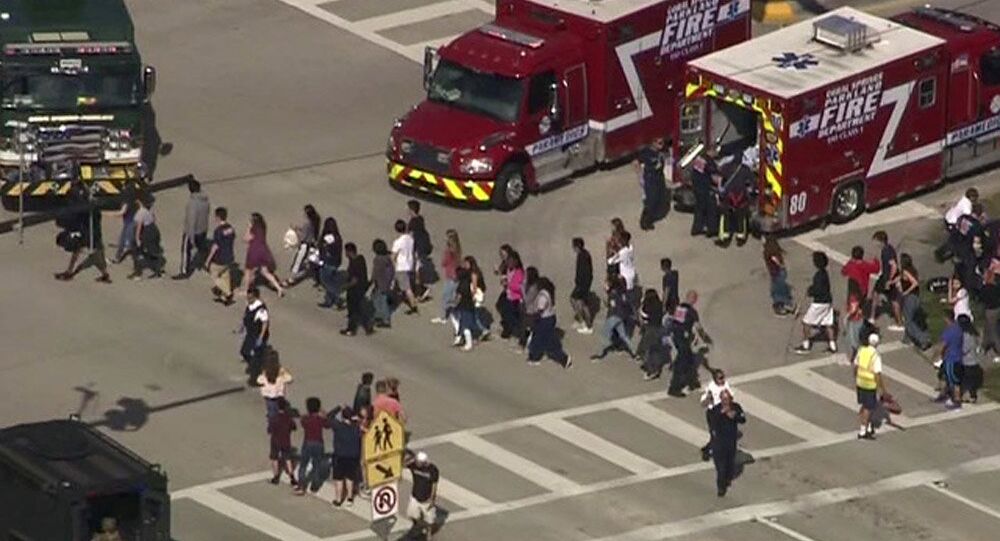 A New Low – Russia Smeared in US School Massacre

Hysteria over alleged Russian meddling in US affairs hit a new low this week, with claims that Kremlin-controlled internet agents are exploiting the Florida gun massacre.

Other US news media also gave prominent coverage to unsubstantiated claims that Kremlin-orchestrated internet agents, known as "trolls" or "bots", were heartlessly exploiting American public grief over the mass shooting.

The NY Times report stated: "Any news event — no matter how tragic — has become fodder to spread inflammatory messages in what is believed to be a far-reaching Russian disinformation campaign."

© AP Photo / Joel Auerbach
When Free Speech 'Crosses the Line': Does US Need to Tackle White Supremacists?
Under the headline, "Russia bots fuel Florida gun debate", CNN news channel reported: "Cybersecurity and media experts are not surprised that trolls and bots are leveraging the Florida school shooting to cause divisions."

There are several disturbing aspects to this latest anti-Russia media coverage in the US. For a start, the claims of Russian internet activity are being relayed as if they are verifiable fact when that is far from the case.

The media reports are based on private research and "monitoring groups" whose methods for tracking internet posts are not clear or verifiable.

The same criticism of unsubstantiated innuendo being embellished as "facts" applies to the more general US media narrative of Russian meddling in American politics, or so-called "Russiagate".

© REUTERS / Leah Millis
Trump Denies Collusion in Tweet After Indictment of Russian Nationals
CNN cites one US-based group called Hamilton 68 and goes on to admit: "The group does not disclose which [Twitter] accounts it tracks and CNN has not independently verified its findings."

Yet that admission doesn't stop the channel, as well as the NY Times and others, from running sensational, factual-sounding headlines.

This is appallingly poor journalism. The words "alleged", "claimed" are no longer used to indicate unverified.

Another disturbing aspect is the way that US mainstream media, including the supposed "paper of record", the New York Times, are inciting rabid Russophobia.

Implicating Russia for exploiting the horrific mass shooting of 17 students at a Florida high school earlier this month is aimed at denigrating the Russian government and its people as having no morals or compassion. Demonizing Russia in this way is aimed at dehumanizing Russians.

CNN quotes one "expert" as saying: "This pattern of divisive propaganda is becoming a staple in information warfare fueled by social media".

The NY Times quotes Senator Mark Warner: "What we're seeing is a continuous assault by Russia to target and undermine our democratic institutions, and they're going to keep coming at us."

This plays into the wider narrative pumped out over the past year by Washington politicians and intelligence agencies that the Kremlin is ruthlessly waging an information war on the US.

Such thinking is, however, leading to Americans having no compass on reality or rationality.

Last week, the heads of the CIA, FBI, NSA and other intelligence agencies warned that the alleged cyber meddling by Russia in the 2016 presidential election is being repeated again for this year's congressional ballots.

Screenshot/Fox News
Russiagate Indictment by US Justice Department Is Still Pure Chatter
There is simply no credible evidence for these outlandish "Russiagate" claims. Even after months of investigating alleged Russian interference, the US special counsel Robert Mueller could only come up with shoddy indictments against 13 Russian individuals published last week. There was not a shred of evidence, nor any kind of substantiation linking Moscow to the alleged scheme.

The alleged Russian scheme is so tenuous, the Americans might as well as blame internet scam-gangs operating from Nigeria, India or any other number of countries for meddling in US politics.

Russian Foreign Minister Sergei Lavrov dismissed the latest indictments as "blather", pointing out that no evidence is ever presented. Which is handy for the accusers. Because there is no evidence!

Nevertheless, based on this flimsy information, senior politicians in Washington are asserting that "Russian is engaging in an act of war on the US".

Following news of the indictments, Senator Ben Cardin said: "Russia's aggressive effort to interfere in the presidential election amounts to an act of war. It is time for [President] Trump to muster all the tools available to seek justice on behalf of the American people and protect our nation from ongoing attacks on our electoral and social systems."

Instead of the Russiagate nonsense dying a death, as it should from lack of evidence, the narrative is becoming even more frenzied and deranged.

Possibly that's because large sections of the US media and political establishment have invested so much capital in the narrative that they can't afford now to let it go and admit there is nothing to their claims about Russian interference.

Russia has repeatedly rejecting any such "influence operation" or cyberattacks on the US.

One gets the impression from American claims that the only "grounds" for their allegations are contrived from the legitimate operations of Russian news media like Sputnik and RT. Just because these news outlets are Russian state-owned and carry critical news and commentary concerning US politics, among many other issues, this appears to be "grounds" for American and European politicians making the wild mental leap asserting this constitutes "Kremlin meddling".

By that token, the same could be said for American, British, French and German state-owned media outlets.

The whole Russiagate myth has relied on US intelligence agencies propounding claims through dutiful American media outlets, amplified by partisan politicians and think-tanks, and repeated ad nauseam by European media and politicians. It's the Big Lie technique of Nazi propagandist Joseph Goebbels.

The irony of course is that American and other Western intelligence agencies are the most intrusive and insidious influence-merchants on the whole planet. Destroying and subverting governments, poisoning public opinion and demonizing individuals and entire foreign nations is how they operate routinely.

© AP Photo / Carolyn Kaster
How US Meddles in Other Nations' Elections 'in the Interests of Democracy'
The CIA's Operation Mockingbird set up in the 1950s recruited thousands of journalists to work in household news organizations to pump out disinformation to control American public perception, whether it was with regard to justifying illegal wars or covering up assassination of political leaders, including their very own President John F Kennedy.

American politicians, military and intelligence are congenitally programmed to pick a war with Russia.

The preposterous claims that Russia is attacking American democracy are at bottom dangerous warmongering. The Russiagate ruse is aimed at inciting hatred among the American public towards Russia to view it as an enemy who is "attacking our way of life".

The claims are totally untenable and unsustainable from the dearth of evidence. It is a myth concocted by ideologically sick people.

Because it is a myth, it is liable to fade from lack of substance.

That is why the Russophobia must continually be stoked with new twists in the narrative.

Alleged interference in American democracy is mutable with claims of Russia helping the "Syrian regime" drop chemical weapons on civilians; or Russian athletes "cheating" with drugs at the Olympics; or Russian military intelligence targeting critical civilian infrastructure in Western states.

The latest twist is particularly odious. To claim that Russia is dancing on the graves of American students and sowing social tensions over the harrowing controversy of guns in US society is a new, despicable low.