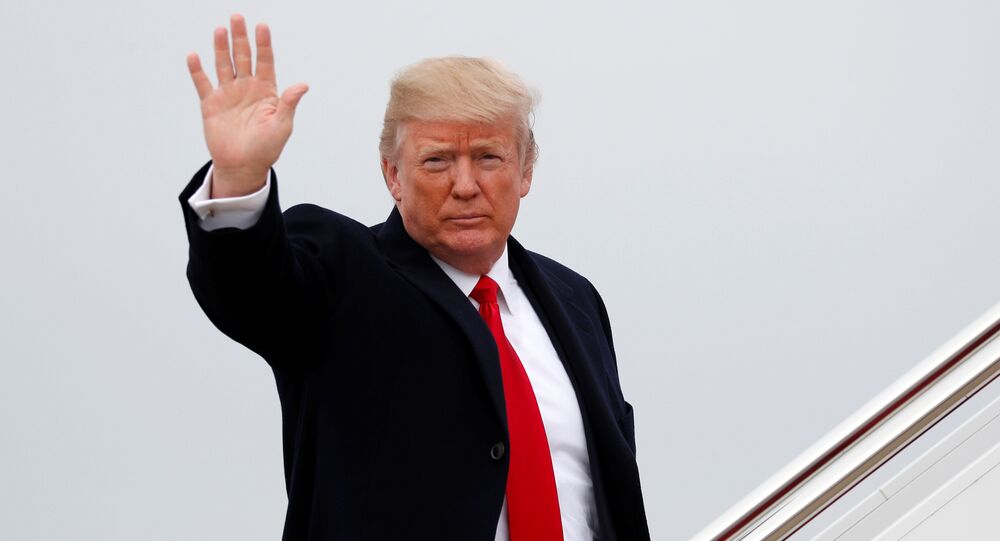 Trump’s Art of the Cheat

Donald Trump officially became the 45th US president exactly a year ago this weekend following his inauguration ceremony. During his inaugural address, he promised to “make America great again” and to give power back to the ordinary “forgotten people” of his country.

One year on, however, it seems clear that the American people have been conned.

Under Trump’s watch, the US has, far from being elevated, become more diminished in its international image.

A year of foreign policy debacles – including inciting a possible nuclear war with North Korea, fouling up Middle East peace efforts, and antagonizing Russia, China and Iran – are just some of the reasons why America’s standing in the world has floundered under Trump.

© REUTERS / Yuri Gripas
Trump Isn't 'Robot, Tells Things Like They Are' - White House on 'Sh*thole Countries' Remark
The Trump administration’s announced plans this week to set up a new Border Force of 30,000 militants in Syria is a stark U-turn on this president’s earlier promises to get his country out of foreign military interventions – and to put "America first" for the benefit of ordinary American workers and their families.

Perhaps the only "achievement" that President Trump can claim to have scored from his first year in office is the massive $1.5 trillion tax giveaway pushed through Congress at the end of last year – the vast majority of which will go to enrich corporations and the top 1 percent of wealthy and billionaire businessmen like Trump himself.

For most ordinary Americans – the “forgotten people” whom Trump eulogized in his inaugural address – will see little or no financial benefit from his tax overhaul.

Trump’s approach to two specific international issues reveals a lot about his character and how he operates.

On the Iran nuclear deal, which is a UN-backed international treaty signed by his country under predecessor Barack Obama in 2015, as well as by Russia, China and the European Union, Trump has repeatedly rubbished this accord “as the worst ever”.

© REUTERS / Carlos Barria/File Photo
Analyst Explains How African States Can Make Trump Apologize for 'Racist Remark'
This president is now warning that he will crash the deal altogether if it is not renegotiated to provide more favorable terms to Washington.

Russia and all other signatories have responded with dismay and disbelief, saying that the Iran nuclear accord is simply not “re-negotiable”. It is a done deal, ratified under international law by the UN Security Council.

The churlish demands by Trump illustrate how he operates: bad-faith, backsliding and bullying.

The same obnoxious traits can be gleaned from the way the American president walked away from the Paris Accord, also signed in 2015, which is an international treaty to curtail harmful global climate change.

Trump doesn’t believe the scientific evidence warning of grave climate impact on the planet, thinking instead that it’s all a conspiracy to hamper US economic growth.

© REUTERS / Joshua Roberts
Year in Review: Trump Phenomenon Deepens Political Divide in US, Sparks Unrest Abroad
Again, repudiating the obligations to a multilateral treaty, Trump abandoned the Paris Accord during this first year at the White House. But then months later, no doubt due to the backlash of global disdain, the president is reportedly saying that he might rejoin the accord “if it is re-negotiated with more favorable terms to the US”.

This is a similar ploy from Trump as seen towards the Iran nuclear agreement. Bad-mouth the deal to no end, rubbish it, undermine it, then in bad-faith threaten to walk away from it, only later to try to coerce other parties to capitulate to your demands.

Trump and his supporters might say that such a method is the hallmark of sharp business acumen. This approach to business, they will say, is why Trump became a multi-billionaire property magnate and a Reality-TV star before he turned to politics to become the “chief executive” of the US.

© REUTERS / Francois Lenoir
Pentagon Chief: Pakistan Must ‘Redouble’ Efforts to Fight Extremism at Home
No. There are such things as principle, honor, trust, commitment and the seal of a handshake. Trump’s conduct as a businessman and later as the leader of his country shows that he has very little of these attributes.

His 1987 best-selling book, The Art of the Deal, was supposed to be a prescription to guide others for business success. Coauthor Tony Schwartz has come out over the past year to repeatedly claim that Trump made zero contribution to writing the book. He has also denounced Trump as a sociopath and con-artist. Threats of suing Schwartz over his claims by Trump have not materialized.

Schwartz has since forfeited his profits from the best-seller as “blood money” claiming that he donated all his proceeds to legal aid for migrants facing deportation under Trump’s anti-immigration policies.

As for Trump, a Washington Post article reported that he did not, in fact, donate his share of the book’s royalties to various charitable causes, which he had promised to do. This perfidy, again, is redolent of the way Trump has conducted foreign policy as president.

Trump’s penchant for backsliding and bullying has also been reliably reported in his dealings with employees at his various hotels and casinos around the world. He quashes attempts by workers to unionize, and many of his employees, from cleaning maids to bar-tenders to construction workers, have complained that they are often not paid their full entitlement as per contract agreements.

It’s not hard to see from where Trump derived his predatory profiteering practices. The 71-year-old was born into fabulous wealth, inheriting millions from a property tycoon father during the 1960s. Trump junior’s “success” in the world has arguably been all about using his unearned wealth to screw other, more vulnerable people. This is not so much owing to smart business and innovation that Trump continually brags about, but rather it is more about bludgeoning others with privilege and power.

Ironically, one of the sections in his allegedly co-authored book is titled: “Use Your Leverage”. Trump seems to know all about that. Using his leverage to extract more concessions out of others even after the deal is done.

A year of Trump in the White House has shown his “Art of the Cheat” to be nothing other than a brazen contempt for any scruples, fair play or collective responsibility. It’s all about Me, Me, Me.

© REUTERS / Carlos Barria
Trump Plans to Declare Russia, China as Competitors Challenging US Power - Reports
But let’s not kid ourselves that the problem is solely about one boorish person. Trump is but the personification of American capitalism and its imperialist, lawless bullying towards the rest of the world.

If Trump were not in the White House, we would still witness the same predatory misconduct, albeit in a more disguised, deceptive manner, dressed up with lofty American rhetoric about "exceptionalism."

One "silver lining" to Trump is that he is hastening exposure of the real nature of American power to the rest of the world. The exposure is ugly and nasty. But at least it dispels any myths about benign American power, and thereby allows for a corrective challenge, from ordinary American citizens, as well as from citizens around the world.