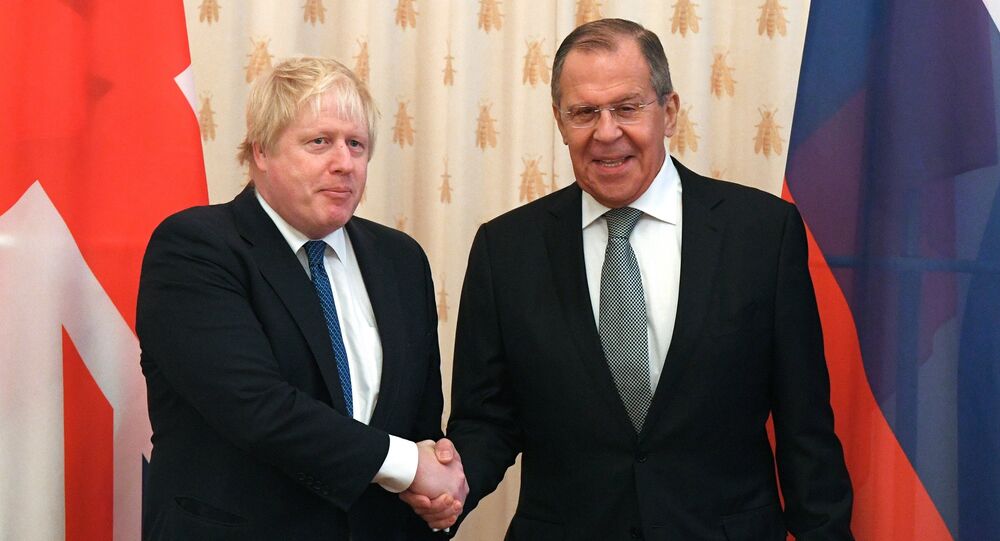 The cardinal sin of Theresa May’s government lies in its inability to use proper tools for the right problems. Boris Johnson’s visit to Moscow clearly showed that in his quest to appease the Russophobes in London and Washington, the British minister forgot that aggressive negotiation tactics are useless, when dealing with Russian officials.

Boris Johnson used the fact that he is the first UK foreign minister to visit Russia in just over five years in order to highlight the difficult relations between the two countries, stressing that they were going through what he described as a "very difficult patch." He then said: "We can't ignore those difficulties.

We cannot pretend that they don't exist and we don't share a common perspective on events in Ukraine, or on the western Balkans, or, as Prime Minister Theresa May has said, on Russian activities in cyber space."

Endless attempts to frame Brexit as a result of Russian interference are insulting, not only to the Russian officials, but also to the British voters who are implicitly considered gullible enough to be swayed by Facebook ads that allegedly cost a whopping sum of 73 pence and were seen by 200 people. Needless to say, bringing up the fake news story about “Russia activities in cyberspace” was a bad conversation starter. Sergei Lavrov said that he and Mr. Johnson discussed a wide range of topics, including Libya, Iraq, Syria, Yemen and North Korea. The Russian minister also mentioned that an agreement to discuss the impact of Brexit on UK-Russia ties had been reached.

Let's do a quick recap of the British involvement in one of those conflicts in order to see whether Mr. Johnson could claim the high moral ground in his discussions with Mr. Lavrov.

READ MORE: Why UK Foreign Secretary Johnson's Visit to Russia Was Much Ado About Nothing

The UK government played a big role in the military intervention against Libya, citing concerns about human rights violations committed by the Gaddafi regime. A more cynical explanation for the British involvement in the Libyan war is that some British oil companies wanted to gain a significant share of the Libyan oil and natural gas production. As The Guardian wrote in 2011: "Rebel leaders had already made clear that countries active in supporting their insurrection – notably Britain and France – should expect to be treated favourably once the dust of war had settled."

Operation Ellamy, the enforcement of a no-fly zone over Libya during the 2011 civil war, cost the British taxpayer 238 million pounds, and its consequences were disastrous from a human rights perspective. Gaddafi was a brutal dictator, but under his reign the country enjoyed a relatively high standard of living, especially compared to its African peers.

After Gaddafi's murder, Libya became a playground for various radicals and terrorists, who even managed to start a thriving network of slave markets. After CNN released video footage of migrants being sold into slavery in Libya, British MPs demanded that the international community tackle the problem, but never acknowledged that it was a problem created in part by the British politicians who used taxpayer funds to co-finance another American attempt at “nation building.”

© AFP 2021 / Karim Sahib
We Came, We Saw, We (Sorta) Won: Those Times That US Triumphed Abroad… Or Not
Boris Johnson can't be held responsible for the actions of his predecessors, yet it’s a pity that he doesn’t admit that the track record of British interference in Libya is woeful, because without it, a fruitful dialogue on Libya stabilization is impossible.

Another reason why Mr. Johnson's sermons regarding human rights issues and the need to establish democratic political systems in the Middle East likely fell on deaf ears is that the British government itself demonstrates a blatant disregard for the opinion of the British voters. There can hardly be a more direct expression of the people's will than a referendum, and the British people voted for Brexit.

Despite the vote, Theresa May's government has failed to deliver the Brexit people voted for, because it is safe to assume that no brexiter actually wanted the prime minister to pay between 35 billion and 39 billion euros to the European Union. Aggressive negotiation tactics would have been more appropriate during the Brexit negotiations in Bruxelles, but instead the British government opted to engage Mr. Lavrov in a confrontational manner, most likely driven by a misguided desire to show the world that the UK's standing in the world was not affected by its departure from the European Union.

The Brexit vote was actually a moment of glory for the UK, because millions of people around the world came under the impression that the UK is a real democracy. And then Theresa May took the matter into her own hands, snatching defeat from the jaws of victory, hurting the UK's international image in the process. One of the key reasons British voters opted to quit the EU was the desire to stop paying the unelected EU bureaucracy, but that is exactly what Theresa May agreed to. To add insult to injury a significant part of the EU budget is spent on financing programs for Poland (the biggest net recipient of EU funds), so it can be said that the UK will be paying a tribute to Poland for the possibility to exercise its right of leaving the European Union.

The Polish minister of foreign affairs once said that it is in the Polish interest "that Britain remain an EU state as long as possible and pays contributions as long as possible," and he definitely got his way. Last week Theresa May flew to Warsaw to ask the Polish government for support in the next round of Brexit negotiations, despite the fact that the government of Poland is now under EU investigation for antidemocratic practices.

In this context, maybe Lavrov should negotiate with the Polish minister of foreign affairs, because Poland seems to have a significant influence on the British foreign policy.

The UK-Russia relations can be improved, but significant improvements are unlikely to be achieved before the British government acknowledges that Russia has the right to defend its national interests. When Downing Street shifts its focus on the interests of the British public and not the interests of the European bureaucracy, Polish politicians or Washington neocons, it will surely achieve a breakthrough in UK-Russia relations. Until then, however, the only thing Mr. Johnson and Mr. Lavrov can do is to agree to disagree.

Boris Johnson on His Russia Visit: 'We Have Much More in Common Than Divides Us'