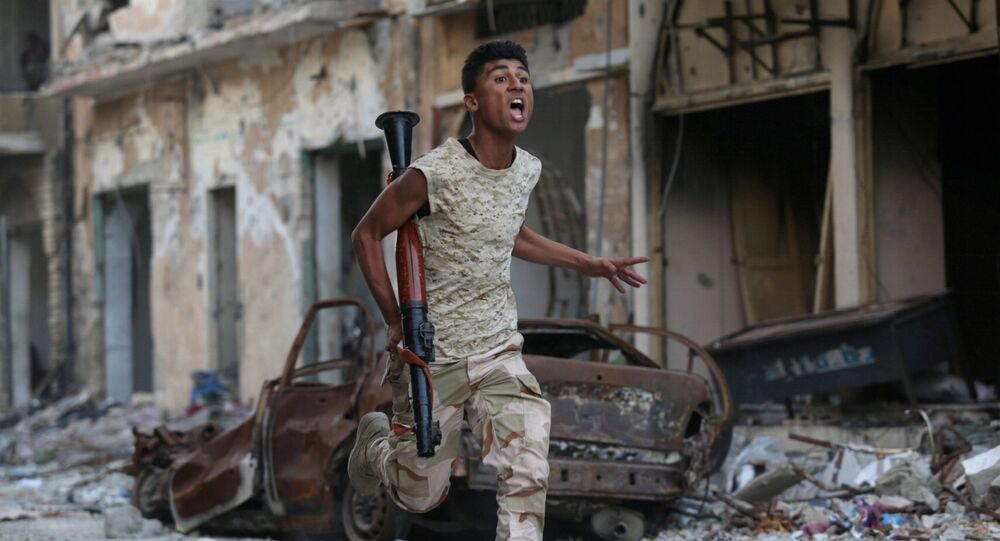 NATO's military intervention in Libya in 2011 has justifiably earned its place in history as an indictment of Western foreign policy and a military alliance that since the collapse of the Soviet Union has been deployed as its sword. The destruction of Libya will forever be an indelible stain on the reputations of those countries involved.

But now, with the revelation that people are being sold as slaves in Libya (yes, you read that right — in 2017 the slave trade is alive and kicking Libya), the cataclysmic disaster to befall the country has been compounded to the point where it is hard to conceive of it ever being able to recover — and certainly not anywhere near its former status as a high development country, as the UN labeled Libya in 2010, a year prior to the "revolution."

Back in 2011, it was simply inconceivable that the UK, the US and France would ignore the lessons of Iraq in 2003, just nine years previously. Yet ignore them they did, highlighting their rapacious obsession with maintaining hegemony over a region that sits atop an ocean of oil; this regardless of the human cost and legacy of disaster and chaos this particular obsession has wrought.

When former UK Prime Minister David Cameron descended on Benghazi in eastern Libya in the summer of 2011, basking in the glory of the country's victorious "revolution" in the company of his French counterpart Nicolas Sarkozy, he did so imbued with the belief he had succeeded in establishing his legacy as a leader on the global stage. Like Blair before him, he'd won his war and now was intent on partaking of its political and geopolitical spoils.

© AFP 2021 / Stefan Rousseau
Then British Prime Minister David Cameron (R) gestures next to then French President Nicholas Sarkozy as they arrive at Benghazi airport on September 15, 2011.

Cameron told the crowd, "Your city was an inspiration to the world, as you threw off a dictator and chose freedom."

Pondering the former UK prime minister's fatuous boast, I am reminded of a conversation I had recently with the driver of a cab taking me home to my apartment in Edinburgh, Scotland one evening. During our exchange he informed me that he was originally from Libya, before going on to reveal that he was forced to flee the country after his family were massacred by Cameron's freedom-loving revolutionaries in 2011. In Libya, prior to the "revolution" and NATO's air campaign, he'd been a petroleum engineer with a PhD. Now he was working ten hours a day driving a cab in Scotland in the middle of winter.

The destruction of Libya by NATO at the behest of the UK, the US and France was a crime, one dripping in the cant and hypocrisy of Western ideologues for whom the world with all its complexities is reduced to a giant chessboard upon which countries such as Libya have long been mere pieces to be moved around and changed at their pleasure and in their interests — interests which are inimical to the people of the countries they deem ripe for regime change.

© AP Photo / Emilio Morenatti
The European Union is Laying the Groundwork for Extremism – Analyst
The word extremist is perhaps overused in our lexicon, but it is entirely appropriate when describing the pro-war neocon lobby that exerts inordinate influence on Western foreign policy. We are talking a class of rich, privileged and expensively educated men and women who are bent on purifying the world in the name of democracy. The end result has been a litany of countries, destabilized and turned upside down with the lives of their citizens completely upended in the process.

Nonetheless, war and regime change without end remains their credo, driving them ever onwards as they lurch from one disaster to the other, intent on, per Beckett, failing once, trying again, and failing better.

In 2011 the Libyan people fell victim to the West's crude attempt to hijack the momentum of the Arab Spring at the very point at which it came to the end of its reach. The speed of its spread and mass support in Tunisia and Egypt, where it succeeded in toppling two pro-Western dictators in the shape of Ben Ali and Hosni Mubarak, caught Washington and its allies by surprise.

Libya is where they decided to try and place themselves at the head of its momentum. They did so, motivated not by the desire to help effect democratic change in the country, but to ensure that the extensive and lucrative oil exploration contracts and economic ties forged with the Gaddafi government were protected and upheld after its demise. This was their motivation, and the result six years on is a failed state in which the slave trade now exists.

Washington and Europe have never been a source of stability in the Middle East or North Africa. On the contrary, their presence and double-dealing has only ever brought the people of this part of the world unremitting suffering and despair.

It is just as Gandhi said:

"What difference does it make to the dead, the orphans and the homeless, whether the mad destruction is wrought under the name of totalitarianism or the holy name of liberty or democracy?"

The European Union is Laying the Groundwork for Extremism – Analyst