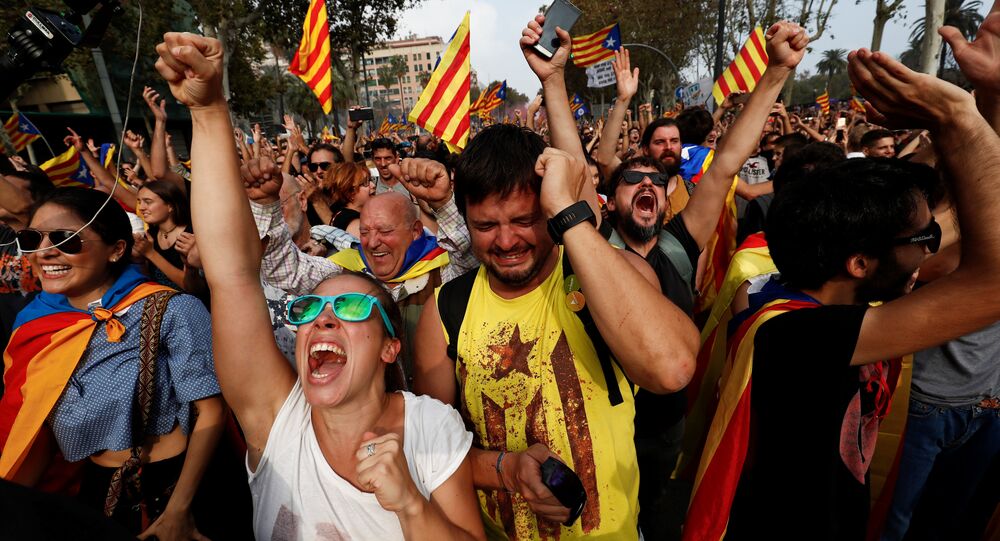 Catalan independence is not worth dying for. The region is not suffering oppression nor is it colonized. The Catalan independence movement is being driven by nothing more than cultural nationalism and economic self-interest. It is the self-determination of fools.

Yet, regardless, with the Catalan regional parliament in Barcelona declaring UDI (unilateral independence from Spain), and with the Spanish government in Madrid imposing direct rule on the region, the stage is set for a violent clampdown by a Spanish state that has already demonstrated its willingness to mete out violence during the course of this crisis. The outcome, unless sanity prevails, may well be bloody and brutal.

The possibility of such a scenario when it comes to the cause of Catalan independence is especially mind-boggling, because arrive in Barcelona and you are confronted not by a downtrodden city where a heavy atmosphere of oppression lingers — such as Belfast in the 1960s and 1970s, for example, or the occupied territories of Palestine today — but by one of the most modern and affluent cities in Europe, located in one of the richest regions of Europe.

Barcelona is a truly international city, one that is alive with tourists. The shops, cafes, restaurants and cantinas are bustling. Culturally, it boasts an abundance of riches, while its infrastructure and transport network — bus, rail and underground — is first rate. Yet here we are, witnessing a crisis that appears more compatible with the Barcelona of 1936 than 2017..

I say "appears" because it would be a mistake to depict the current crisis as a re-run of the Spanish Civil War, despite the efforts of some to draw such a connection. The Catalan independence movement, as mentioned, is being driven not by anti-fascism or anti-colonialism, but by cultural nationalism and economic self-interest, during which both have been elevated to the status of political principle.

Spain today is a liberal democracy with a democratic constitution voted on and supported by the vast majority of Spaniards, including Catalans, when established in 1978. This being said, the alacrity with which Madrid deployed massed ranks of Guardia Civil riot police against unarmed civilians in Barcelona and elsewhere in the region on October 1, in an attempt to disrupt a referendum it deemed illegal, suggests that the germ of authoritarianism planted within the country's political culture by its fascist dictator, Franco, is yet to be completely eradicated 42 years after his death.

In fact with every action he has taken during the present crisis, Spain's Prime Minister, Mariano Rajoy, has only bolstered support for Catalan independence rather than minimize it. If politics is an art it is one he has failed to master to any meaningful extent. Because regardless of its provisions, the moment that a constitution is used as justification for unleashing violence against unarmed civilians as a first rather than last resort in any given crisis it loses legitimacy, as does the government acting in its name.

On the other side of the crisis, meanwhile, Carles Puigdemont and his separatist supporters have embarked on a kamikaze reach for independence regardless of the balance of forces arrayed against them. With the EU, Washington, indeed the entire international community, failing to register anything other than fulsome support for Spanish unity up to this point, one can only hope they have a plan B up their sleeves when it comes to facing down the wrath of a Spanish government that has, as said, proved it is prepared to batter, bludgeon and brutalize civilians who dare challenge or defy its writ. If not — if Puigdemont and his supporters do not have a plan B, given that plan A of appealing to Brussels for intercession and mediation has failed — they have merely exposed their supporters and people to more violence.

In politics, as in war, knowing when to retreat is as important as knowing when to advance. Indeed the former is often more difficult and requiring of more courage than the latter, due to the challenge it brings of managing the unrealistic expectations and demands of some within your own ranks; those for whom any backward step is tantamount to betrayal. With this in mind, it is clear that Puigdemont, faced with the choice of acting sensibly in the face of the aforementioned balance of forces militating against UDI, or succumbing to the pressure exerted against his leadership from within his own movement, opted to succumb.

It is a decision that may well mark his political epitaph.

What also cannot be gainsaid is that Catalan opponents of independence have had their democratic rights subverted by their separatist counterparts' declaration of UDI. Having boycotted the October 1 referendum in protest over its legality, they now find themselves confronted with the prospect of being ripped out of Spain against their will. How can such a state of affairs possibly be acceptable to those who believe in democracy?

The wider point is that neither side in this crisis is without blame when it comes to bringing it to the point of no return. It proves that stability, cohesion and unity can never be taken for granted — even within supposed Western bastions of democracy, such as Spain — and that the principle of self-determination can either be a shield risen in response to oppression, or a sword wielded in service to opportunism and self interest.

It bears repeating — the underlying cause of the crisis that has engulfed Spain is the same one that has fueled support for Scottish independence in recent years; the same one that drove Brexit and which is behind the emergence and traction of anti-EU parties across Europe. It is an economic model, neoliberalism, whose sustainability was shattered irrevocably by the global financial crash and ensuing recession, starting in 2008.

Yet instead of burying the corpse of neoliberalism, as they should have by now, political elites have for purely ideological reasons extended themselves in trying to breathe life back into it with the imposition of austerity programs that have sown even more misery and dislocation in the lives of millions of their own citizens.

Thus they are the authors of their own demise.

The Role of Neoliberalism in Spain's Constitutional Crisis