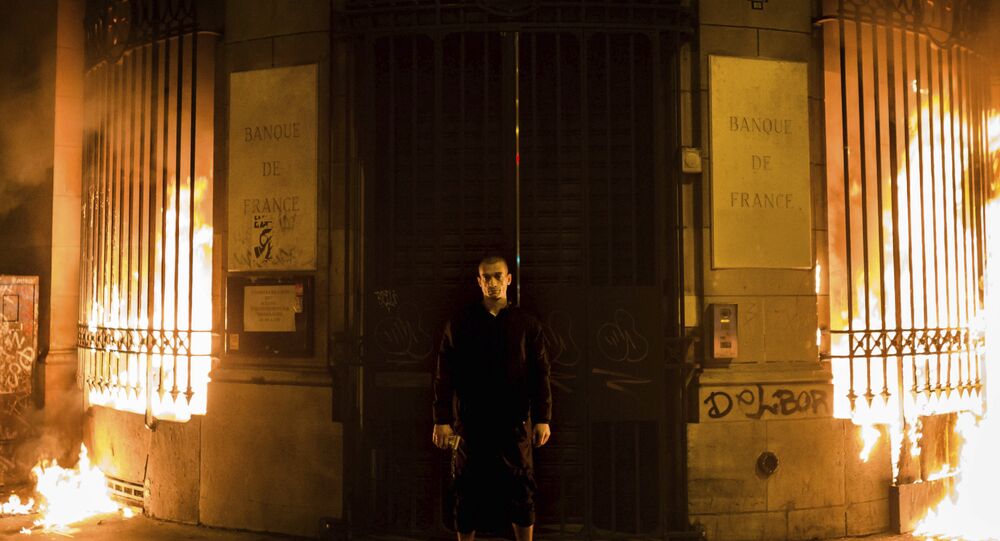 For five years, the Western journalists in Moscow and our own home-grown liberal commentators admired Pyotr Pavlensky. His “artistic performances,” such as nailing his scrotum to Red Square (“Fixation”) or setting the entrance to the Russian security service FSB ablaze (“The Threat”) were seen as an elaborate chess game with “Putin’s regime.”

In that game, Western journalists and Russian liberals gladly agreed, Pavlensky "always came out the winner," making the state look stupid. "By being tough on Pavlensky, the state was acting in the framework of his artistic scenario, because this seemingly vulnerable man is ready to suffer. In fact, he wants to suffer if his suffering exposes the state," explained Marat Guelman, a gallerist of controversial modern art and a curator of several anti-religious exhibitions in Russian cities.

© Sputnik / Vitaly Podvitski
Tables Turned
But when Pavlensky, having received political asylum in France in May 2017, recently set ablaze the building of the Banque de France in Paris, it was Pavlensky's fans turn to look stupid. Marat Guelman was reported to be "having difficulty" to comment on the arson on the day it was committed, October 16, when journalists from the liberal Moscow-based radio station "Ekho Moskvy" asked him to comment on what the "artist" did in France. "I am dumbfounded, I think it would be inappropriate to give qualifications to Pavlensky's action now," Guelman said on air during Ekho Moskvy's interview with him on October 16.

In the context of Guelman's previous statements about Pavlensky, one can understand his confusion. For years, Guelman has been praising both Mr. Pavlensky and his Western supporters. So, when Pavlensky attacked a Western institution (Pavlensky said his aim was "to unleash a new great French revolution" against bankers), it obviously did not fit Guelman's (and the West's) "artistic scenario." For a time being, Guelman could feel himself in the situation of the Russian state — again dumbfounded by Pavlensky's sudden chess move.

One can see the contradiction here. In Russia, any moves to punish Pavlensky for hooliganism or vandalism were denounced by Guelman and the Western press as attacks against freedom of expression. But the French court's decision to place Pavlensky in a psychiatric hospital under police supervision did not provoke any protests from anyone, including Pavlensky's usual supporters.

Thank God, the bank did not burn down, but the damage inflicted by Pavlensky was serious enough for the Banque de France's office to stop operations for several days.

Youtube / Sputnik
A Selfie in Foam: Coffee Art Reaches Peak in This Beijing Café
In fact, it was not the first time that the French authorities' support for "artistic" hooligans in Russia boomeranged by nasty "artistic" hooliganism on the French soil. For example, in 2012 and 2013 French diplomats and the mass media actively supported another Russian "artistic" female group, Pussy Riot, insisting that Pussy Riot's three members should not be punished for their 2012 "punk prayer." During that "prayer," Pussy Riot's members forced their way into Russia's main cathedral and sang a song there denouncing the head of Russian Orthodox church (the Patriarch) as a "Putin-loving bitch." The song was "bravely" sung in masks and provocative folksy attires, from the site in Christ the Savior's cathedral in Moscow, which the Patriarch usually uses for his speeches. Emboldened by the French support for their "Russian sisters," nine French members of the so-called Femen group in February 2013 stormed France's main cathedral, Notre Dame de Paris, with their breasts naked. They yelled insults against the Catholic church and its Pope. Several hundred tourists, who found themselves inside Notre Dame at that moment, were in fact forced to watch and hear the female hooligans, in essence becoming their "artistic hostages."

At the time in 2013, the French interior minister Manuel Valls denounced Femen's action as a "useless provocation." And the mayor of Paris, Bertrand Delanoe, an avid supporter of Pussy Riot, showed little appetite for this Pussy Riot-style action in his own city, dismissing it as "a parody of the brave fight for gender equality."

So, in the magic box of the Western mainstream press, the same action that is seen as "anti-Putin political expression of artistic freedom" in Russia becomes a "useless provocation" and a crime in France.

© Photo : Pixabay
Woman Launches Selfie Project After Being Fed Up With Catcallers (PHOTOS)
Now, after Pavlensky's attack against Banque de France, French and American television has only reported on the arson. This time, little attention was paid to "the artist's romantic figure" photographed with the burning bank in the background. No artistic analysis, no search for hidden meanings and subtexts. No denunciation of the French court's decision to place Pavlensky in a mental institution as some sort of "punitive psychiatry" at work. And for Russian liberals too, Pavlensky the artist suddenly became just "an evil idiot," as Ekho Moskvy's prolific writer Arkady Babchenko characterized the station's former artistic idol in an angry commentary published after the initial shock from Pavlensky's "new French revolution" somewhat subsided.

In 2015, when Pavlensky set the FSB on fire, the mainstream media's reaction was much more interested, analytical, full of desire to understand even the subtlest movements of the artist's soul.

In that sense, the 2015 article in The New Yorker magazine, headlined "The Protest Artist Who Stumps Putin" and written by the former head of Radio Free Europe's Moscow office, Masha Gessen, was the most illustrative example of such sympathetic artistic analysis. The New Yorker's Masha Gessen called the repair works in FSB after Pavlensky's arson "state-provided perfect coda for a piece of protest art."

© AP Photo / Steve Parsons/PA via AP
Treasure Hunt? Thousands of Historic Artifacts Disappear from Major UK Museums
In the same article, Masha Gessen called Pavlensky's actions "intellectual" and even more "finely scripted" than Pussy Riot's masterpieces. Of course, since it was not the Banque de France burning in 2015!

Summarizing Pavlensky's achievements, Masha Gessen in her 2015 article admired Pavlensky for "outsmarting the authorities by making their reaction part of his performance." Well, by his arson in Paris, Pavlensky outsmarted Ms. Gessen, making Masha's reaction (or absence of it) an even greater part of his new performance. The Western media's double standards got a perfect illustration. By becoming a common hooligan in France, Pavlensky managed to dumbfound the dumbfounders, and that is an achievement much greater (or at least funnier) than the old Chinese tactic of "observing the observer." This time, the observer turned out to be a liar with double standards.