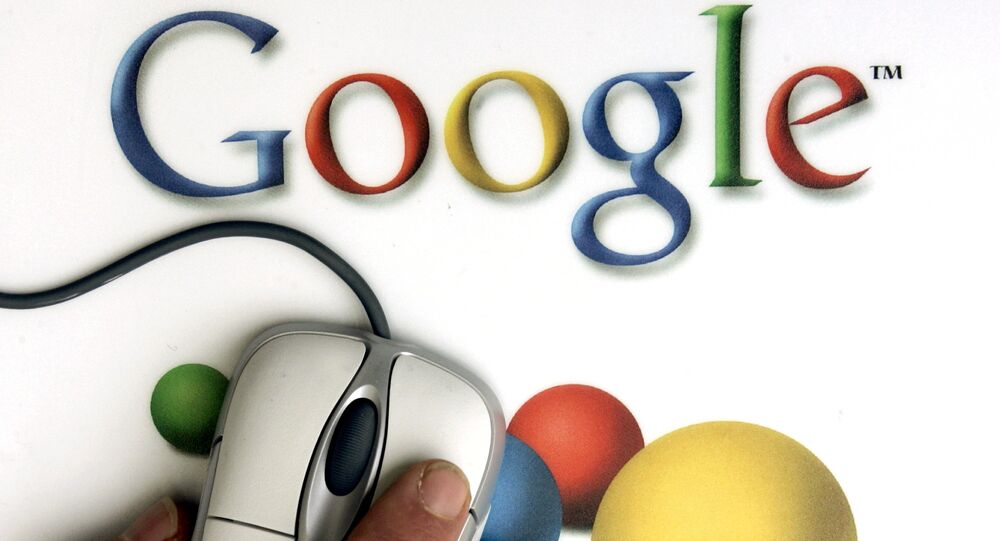 Google This! WaPost Gets Its Anti-Russian Panties in a Bunch... Again

They're at it again. The neocon Washington Post's anti-Russian campaign has seen them republish a McCarthyite list of US websites accused of "reliably echoing Russian propaganda" and claim that a "Russian operation" hacked a Vermont utility grid.

Now neocons are pushing the story — wait for it — that Google has uncovered Russian-bought ads on You Tube, Gmail and other platforms.

It's important to look closely at the language used in the article of October 9. For all is most certainly not as it first appears. It never is, when you're dealing with neocon propaganda, is it? Iraqi WMDs anyone?

The piece begins with a dramatic claim: "Google for the first time has uncovered evidence that Russian operatives exploited the company's platforms in an attempt to interfere in the 2016 election."

But how do we know this? Well, its all "according to people familiar with the company's investigation" — who are not named.

"The Silicon Valley giant [*that's Google and not some fairy tale figure], has found that tens of thousands of dollars were spent on ads by Russian agents who aimed to spread disinformation across Google's many products, which include YouTube, as well as advertising associated with Google search, Gmail, and the company's DoubleClick ad network."

Now the title of the article talks of "Russian-bought ads." But now its stated — again without any evidence being produced — that the ads weren't just bought by Russians, but by RUSSIAN AGENTS!

We're told that the "discovery" is "significant" because the ads "do not appear" to be from "the same 'Kremlin-affiliated' troll farm" that is alleged to have "bought ads on Facebook." So the "Russian efforts to spread disinformation online" might be "a much broader problem than Silicon Valley companies have unearthed so far."

Got that? The Russians are taking over our social media to spread disinformation! They're trying to gain control over our minds to get us to vote for people we don't really want to vote for!

It all sounds pretty alarming — which is of course the intention — but then you get to around one-third in to the article. "The people familiar with Google's investigation [THEM AGAIN!] said that the company is looking at a set of ads that cost less than US$100,000 and that it is still sorting out whether all of the ads came from trolls or whether some originated from legitimate Russian accounts."

So in other words, we don't know that these ads came from "trolls" or "Russian agents" at all. They could all have come from "legitimate" accounts. This seems to contradict the bold claim at the beginning that, "The Silicon Valley giant has found that tens of thousands of dollars were spent on ads by Russian agents."

Perhaps realizing that its readers might be starting to think the piece had more holes in it than the Augusta golf course, the authors then move away from their claims about Google — and turn to Facebook and Twitter.

Apparently, "Oxford University researchers" have reported that Twitter and Facebook accounts linked to Russians (note, just "Russians" this time and not "Russian agents"), targeted online content at US military veterans and active-duty personnel, mixing disinformation alongside other content already being read and shared widely among these communities.

This research, which we're all supposedly have to accept as the gospel, because it comes from "Oxford University," labels those who follow tweets from RT.com and WikiLeaks as part of an "International Conspiracy Theory and Issue-Specific Group." This group also includes "Anti-NWO," described as "conspiracy theorists who oppose an international 'New World Order,' " as well as "Pro-Palestine," and "US Libertarian accounts."

Yes, grown-up academics at Oxford actually did write such bilge.

The implication from the Washington Post piece and the "Oxford University research" is that all Russian activity on the internet is suspect. And that anyone who dares to challenge War Party propaganda is doing it because he/she's been fed "disinformation" by "Russian agents." This isn't just McCarthyism — it's McCarthyism on steroids.

Perhaps the most hilarious part of the WaPost/Oxford love-in was the claim made by report co-author Philip N. Howard that "in some cases," "known Russian trolls" were using hashtags — such as #Iraq — to "draw attention to the material they were promoting."

The use of hashtags on Twitter to draw attention to what you are tweeting about? Wow! How sinister! No one except "known Russian trolls'"does that, do they?

The WaPost then gives us the truly un-shocking news that RT spent "US$274,100" on its Twitter platform in 2016 — and that the Russian media organization "also has a sizable presence on YouTube." Yes, RT posts regular videos of its interviews and reports on its YouTube channel and lots of people watch them. How utterly scandalous! RT should of course do nothing to promote its work — and not advertise on social media at all. It should have no interest in increasing its audience share and just keep shtum. It certainly should not have a YouTube presence! That's only for media outlets which the Washington Post and the McCarthyite Thought Police approve of!

Much Ado About Nothing

The article then finishes off by informing us that according to the aforementioned "people" in the know, "Google's probe is still in its early stages."

"The number of ads posted and the number of times those ads were clicked on could not be learned."

But hang on a minute, weren't we told at the start of the piece: "The Silicon Valley giant has found that tens of thousands of dollars were spent on ads by Russian agents?" Or was I imagining it?

Talk about Much Ado About Nothing. Will Shakespeare should sue the Post for copyright? B

ut that's been the case regarding the whole "Russiagate" affair. There's been accusations a plenty, but we're still waiting to see any real smoking guns — or indeed any smoking Sobranies.

We're 10 months into the 'Russia collusion' investigation and their bombshell proof is that some Russians bought ads on Facebook & Google.

Earlier in October, on RT, the media analyst Lionel asked the Hill's Brent Budowsky for "just one bit of evidence" of Russian collusion. Budowsky could not adequately respond.

That‘s not surprising. "Russiagate" is the 2017 version of the great Iraqi WMDs hoax. The reports in neocon propaganda sheets follow exactly the same pattern as they did fifteen years ago — sensationalist headlines with unnamed "sources" telling us some pretty shocking things — but without any actual hard evidence ever being produced.

Then, as now, it's a case of "we've got the proof, loads of it, but we can't show it to you, and you must believe us that it's there." The image of Colin Powell holding up that vial at the UN springs readily to mind.

Every time 'MSM' report US-UK government claims of a perceived 'responsibility to protect' Iraqis, Libyans and Syrians, it's fake news.

In 2004, the Washington Post issued a mea culpa for its uncritical regurgitation of the Bush administration's false claims that Iraq possessed WMDs. The paper admitted it "did not pay enough attention to voices raising questions about the war."

But that #epicfail is conveniently forgotten as the paper promotes the latest Establishment-approved conspiracy theory.

Oh, and by the way, those evil Russkies didn't hack into the Vermont electricity grid. That was fake news too.

Freedom of Expression 'on Inexorable Decline' on Twitter - Assange