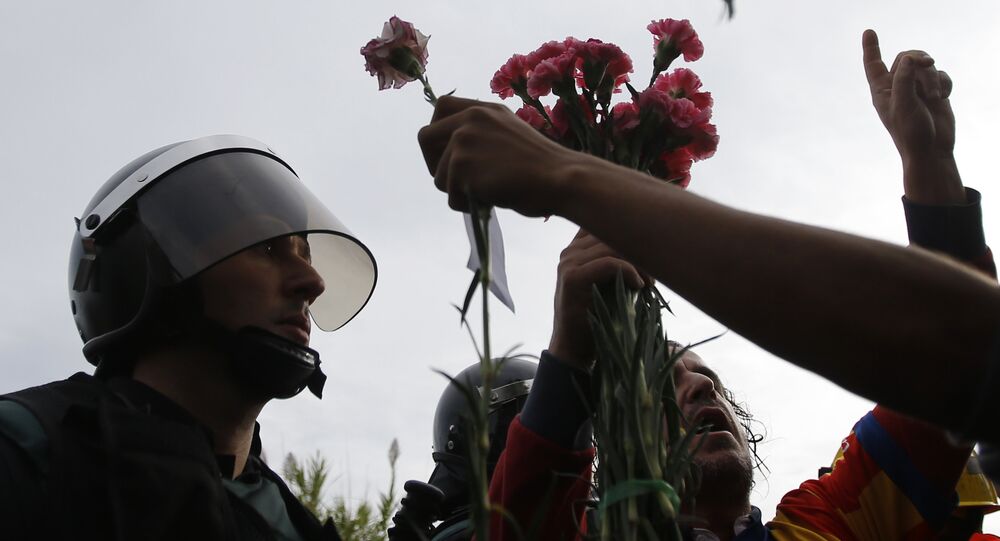 Catalonian Independence and the Ghosts of the Spanish Civil War

Arriving in Barcelona in 1938 during the Spanish Civil War, Ernst Toller wrote, "The most striking experience a foreigner has in Barcelona is that of the functioning of democracy." In 2017 something akin to history repeating is unfolding in the Catalonian capital, where democracy has again been raised aloft as a cause worth fighting for.

The scenes of Spanish riot police marching through the streets of Barcelona and other Catalonian towns and cities, attacking civilians with batons and rubber bullets outside polling stations for the crime of attempting to cast a democratic vote on their future, of ballot boxes being seized and elected politicians being arrested — all at the behest of the government of an EU member state — you might think are incongruous and incompatible with the EU's self-declared status as a pillar of democratic values in the 21st century, a status enshrined in Article 2 of its very own constitution, the Lisbon Treaty, which reads:

"The Union is founded on the values of respect for human dignity, freedom, democracy, equality, the rule of law and respect for human rights, including the rights of persons belonging to minorities. These values are common to the Member States in a society in which pluralism, non-discrimination, tolerance, justice, solidarity and equality between women and men prevail."

However Brussels' position of pristine indifference in the face of the grotesque and disgraceful scenes that unfolded in Catalonia should be no surprise, given the anti-democratic character of its institutions.

It should also not go un-noted that just as the EU has essentially washed its hands of the crisis in Catalonia, taking the position that it is an internal matter for the Spanish government and authorities, so the so-called democratic powers in the 1930s stood by as democracy in Spain was extinguished back then, holding to the supine position of "non-intervention."

While in 2017 no one would seriously suggest that the Spanish government, led by Prime Minister Mariano Rajoy, is akin to the Franco regime that was adorned in the black tunics and knee length boots of fascism, the hardline position Madrid has taken against Catalonian separatism lies much closer to fascist than democratic on the spectrum of response both in form and content.

It is why Mr. Rajoy is now the best friend that Catalonian separatism and independence could have, while at the same time the worst enemy Spanish unity has got. It is why he has now surely made Catalonian independence a question of when not if.

Regardless of the whys and wherefores of constitutional legality, does the Rajoy government in Madrid really believe that the sight of armed riot police attacking civilians outside polling stations in order to stop them casting a vote is one that would enhance its reputation and democratic credentials in the eyes of the world?

Is his government really so blind to Spain's tortured history that it would dare come even this close to resurrecting it? As for those who would claim such historical comparisons are overblown, the chilling sight of protestors giving the fascist salute and singing a pro-Franco anthem at a mass anti-Catalan separatist rally in Madrid in the run-up to the contested referendum in Catalonia is your answer.

Separatism carries within it both the seeds of progress and regress, of dignity and despair, depending on how the potency of its passions are handled by the contending parties involved. To treat separatism as a zero sum game instead of an idea that can only be defeated by another idea, never force, is an invitation to catastrophe. It is why the Rajoy government in Madrid should be under no illusion that it has set Spain on a path towards ruinous consequences with the unleashing of state violence to try and prevent the people of Catalonia from casting a vote on their constitutional future.

Even though the Spanish Prime Minister may have legality on his side, as soon as the first riot police officer put his hands on the first woman and dragged her away from the front of a polling station in Barcelona, he lost the moral argument, transforming the Spanish constitution from a shield guaranteeing the protection of democracy and human rights into a sword being wielded to justify their suppression.

​​​The Spain that found itself engulfed in civil war in the 1930s was home to the best and worst of humanity. It is a conflict that still today invokes the Arcadian dreams of a world in which the common man is the author of history rather than its victim. Thousands traveled to the country from all over the world to fight and die for that dream. Many of them were the sons and daughters of poverty, but all were rich with the belief and faith in a future defined by the unbounded liberation of human solidarity, relegating cold-hearted capitalism and its bastard child, fascism, to a footnote in history. Yet as recent events not only in Spain, but across Europe with the rise of the right and far right have shown, they were unsuccessful.

There is nothing so powerful as an idea whose time has come, the French novelist Victor Hugo famously opined — and he was right. But all the same it would be dangerous folly to consider that the "idea" whose time has come must automatically carry with it the promise of a better tomorrow. Fascism in the 1930s was also an idea whose time had come, nourishing the dark side of the human condition to produce a monster whose ferocity and capacity for death proved every bit as unbounded as the liberation promised by human solidarity.

The ugly scenes being played out in Barcelona in our today are but a chilling reminder that yesterday can, unless we are vigilant, also be our tomorrow.

As for the rule of law by which Mr. Rajoy justified unleashing police violence on such a scale as took place in Barcelona on October 1, the sentiments of Rosa Luxemburg, delivered in response to the 1919 crushing of the Spartacist uprising in Berlin by a German state that had just begin its descent into the swamp of fascism, retain their resonance a hundred years later: "Order prevails in Berlin! You foolish lackeys! Your 'order' is built on sand."