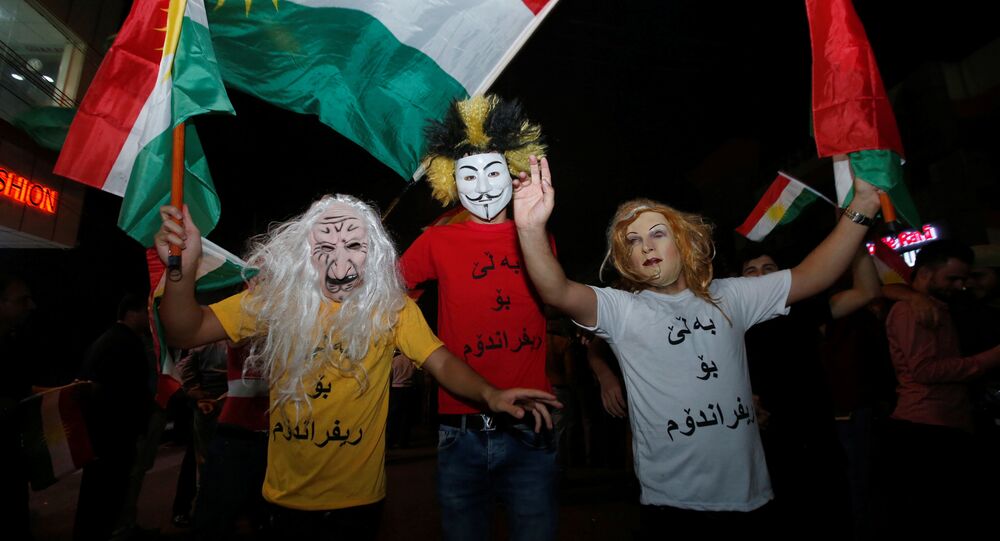 We are living in an age of nationalisms - a resurgence in the embrace of the principle of self-determination as the driver of progressive change amid the chaos and flux authored by the collapse of a neoliberal status quo and the concomitant rise in anger, fear, confusion, and insecurity it has wrought.

From Iraqi Kurdistan to Catalonia in northern Spain, from Scotland to Palestine, not since the end of the Second World War have we witnessed such an upsurge in the assertion of national identity and rights as we are witnessing now.

What should not be overlooked is that nationalism as a doctrine is an empty vessel. What marks its specific character in any age or time are the politics poured into this vessel, determining whether a given nationalist movement or politics is progressive or regressive in scope. Many would cite a marked difference, for example, between the inclusive outward looking nationalism that underpinned the campaign for Scottish independence in 2014, and the exclusive inward looking variant which fueled Brexit in 2016.

© AFP 2020 / Andy Buchanan
Pro-independence supporters console one another in George Square in Glasgow, Scotland, on September 19, 2014, following a defeat in the referendum on Scottish independence.

The point is that not every campaign or movement for self-determination is worthy of support. The breaking up of states on the basis of a principle that is enshrined in the UN Charter, but which reaches back centuries more, has at various points been the catalyst for civil wars, ethnic cleansing, and genocide, informing an unthinking and base tribalism capable of pushing entire societies and peoples into the abyss.

"Nationalism is like electricity. It can kill a man in the electric chair or it can keep a baby alive in an incubator."

For the Kurds — not only in Iraq where a recent unilateral referendum on independence from Baghdad predictably produced an overwhelming majority in favor, but also in Syria, Iran, and Turkey — self-determination has lain at the very heart of their existence since the Middle East was carved up among the colonial powers, Britain and France, at the end of the First World War. It is a tireless quest for independence that has attached not only the word "courage" to their reputation, but also "treachery" — in that though justifiably from their point of view, they are currently exploiting the flux and suffering that has engulfed Iraq and Syria to push for it.

In Syria specifically, the Kurds currently fighting as part of a US-led coalition to liberate Raqqa in the north east will soon have a very important and historic decision to make. With Daesh approaching total defeat, as both the aforementioned US-led coalition and Russian supported Syrian government forces progressively crush the last redoubts of Daesh-controlled territory in the east of the country, the Kurds of the YPG will need to decide whether to continue acting as a US proxy in a country in which Washington's military presence is illegal, or whether to relinquish this role on the understanding that regardless of the moral right to a state of their own, attempting to establish one as allies of US imperialism renders this right nugatory.

Shifting focus to Catalonia in northern Spain, a tenacious and longstanding campaign for independence has reached the point of critical mass with the decision of the Catalonia regional government to hold a referendum to decide the region's future as either a region of Spain, as it is now, or an independent state.

© AP Photo / Emilio Morenatti
A woman gestures as others wave the "estelada" or Catalonia independence flags during a protest in Barcelona, Spain Thursday, Sept. 21, 2017.

The only problem, at least so far as the Spanish government and authorities are concerned, is that the referendum on Catalonian independence, scheduled to take place on Sunday, October 1, is illegal and unconstitutional — a ruling responsible for Spanish police and gendarmes being unleashed with the aim of disrupting and preventing it from taking place.

© AFP 2020 / Damien Meyer
Watch and Wonder: Independence Campaigners in Wales May Copy Catalan Vote
In a country and society forever scarred by the civil war it endured in the mid-1930s, which ended in General Franco and fascism taking power, the sight of troops attempting to suppress the attempt to hold a democratic referendum, regardless of its rights and wrongs, is to say the least not a good look in Spain. What is key in the current constitutional crisis with respect to Catalonia is the role of the crisis of neoliberalism in laying the ground for the reinvigoration of the separatist movement in the region. It has led to the argument that resource-rich Catalonia, home to 7.5 million people, is responsible for a disproportionate share of Spain's national income — i.e. while making up 15 percent of the country's total population being responsible for a fifth of the Spanish economy and a quarter of its exports.

Such economic arguments tend to be simplistic and self-serving, however, given the role of the state in allocating resources and driving exports with the rest of Europe and the world. No matter, their very power lies in their simplicity, conforming to the kind of logic that is both easy to grasp and hard to contradict when married to a sense of grievance — precisely as they are among independence-minded Catalonians.

But no matter the arguments in support of or in opposition to Catalonia's independence, the actions of Spanish Prime Minister Mariano Rajoy in sending in the police to prevent the referendum, arresting Catalan government officials and employing coercive measures, is guaranteed to increase rather than decrease support for the right to hold one. It is a desperate and deluded measure which sits in sharp contrast to the politically mature way in which the UK government and its Scottish counterpart worked together to allow the people of Scotland to hold a referendum on their constitutional future in 2014.

What the Catalonian people, along with all who consider separation and self-determination to be the answer to their respective futures, need to consider very carefully is the possibility of the cure proving worse than the disease.

If you don't believe me, just cast your eyes over to the on-going chaos in the UK as a result of Brexit.