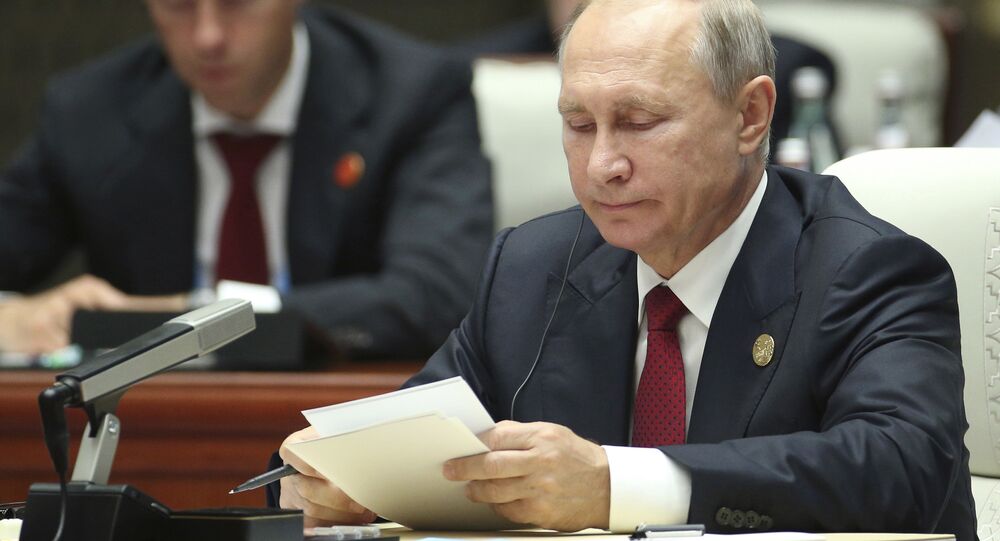 Putin Calls Out US Folly

"It is difficult to dialogue with such people," said Putin, adding: "You can do nothing about it."

Less diplomatically, what the Russian president was lamenting is this: the incorrigible stupidity of US leaders.

To say that is not merely about making a facetious swipe at American politicians. Far more seriously, it points to how difficult and dangerous international relations are when a major party is so evidently obtuse to reason and facts.

© AFP 2020 / Jewel SAMAD
‘Tweeting Like a Teenage Girl’: UN Envoy Nikki Haley Roasted for N Korea Tweet
As if to illustrate the point, while Putin was castigating American low political culture, the US ambassador to the United Nations, Nikki Haley, was opening her mouth to release more of her habitually inane remarks.

Haley told the UN Security Council on Monday that North Korea "was begging for war" and she affected a hilariously innocent pose, saying: "War is never something the United States wants."

What? This is from an envoy whose country has been in a state of permanent war over the past two decades, and which at times has been bombing seven countries simultaneously in flagrant violation of international law.

For the American envoy to make such a patently false rendering of reality is beyond stupid. It is dangerously delusional. This is what Putin was referring to when he said it is difficult to dialogue with such people. It's like trying to reason with someone who's psychotic.

The trouble too with the Americans is that they seem to think that everyone else is stupid.

© AFP 2020 / HOW HWEE YOUNG
Beijing Insists on Adoption of Russia-China Initiative on Korean Peninsula Settlement
On the looming crisis over Korea, the US is pushing China and Russia to impose evermore stringent sanctions on North Korea over its nuclear weapons program. Last weekend the country carried out its sixth and largest underground nuclear test explosion since 2006.

The Americans have set a deadline next Monday for the UNSC to vote for a new round of economic punishments on Pyongyang. Washington wants the drastic sanction of cutting off fuel oil supplies to the country just as the harsh Korean winter approaches. That move is tantamount to an act of war, and yet Washington expects China and Russia to go along with an attack on the vital interests of North Korea.

The stupid arrogance of the Americans is staggering. The US has slapped numerous rounds of sanctions on Russia over dubious claims about interfering in Ukraine and US election meddling. Just last weekend, the Trump administration provocatively seized more Russian diplomatic properties in San Francisco, New York and Washington.

And yet the Americans expect Russia, as well as China whom it is also sanctioning over trade disputes, to go along with its agenda of strangulating North Korea.

As Putin remarked at the BRICS conference: "It's ridiculous to put us on the same sanctions list as North Korea and then ask for our help in imposing sanctions on North Korea."

© Sputnik / Iliya Pitalev
N Korea Crisis: World 'Hasn't Run Out of All Diplomatic Options'
Economic warfare and ramping up military threats is a road to nowhere, added the Russian leader, warning that to keep pushing on that direction, as the Americans are doing, is risking a global catastrophe.

Many people around the world, including many ordinary American citizens, would agree. They can see the blindingly obvious. That the Korean crisis must be resolved peacefully through diplomacy and dialogue. All that is required is for all parties to sit down and talk to each other as equals without preconditions. China and Russia are indeed proposing such a roadmap for a peaceful settlement.

But the American leaders are so inebriated with their own self-righteousness and hubris they refuse to comply with this basic process of diplomacy. A process mandated by international law.

US ambassador Nikki Haley even lambasted the Chinese and Russian proposals as "an insult".

"When a rogue regime has a nuclear weapon and an ICBM [intercontinental ballistic missile] pointed at you, you do not take steps to lower your guard. No one would do that. We certainly won't," said Haley.

Therein lies the kernel of the problem. The Americans call others a rogue regime not worthy of respect when it is they who constitute the biggest rogue regime on Earth, possessing an arsenal of 5,000 nuclear weapons and willing to use them to annihilate other nations, as they themselves have openly stated on numerous occasions.

On the basis of hyper-sanctimony, the Americans declare that they are not willing to talk with North Korea and that the "only options" are either intensifying sanctions or war.

But who are the Americans to order such an ultimatum? An ultimatum that is surely disastrous and with which the rest of the world has to subordinate to.

© REUTERS / Jonathan Ernst
Trump Reaffirms US Readiness to Use Nuclear Weapons to Counter North Korea
The arrogant, ignorant Americans are so besotted with their own hubris that they cannot even conceive of their outrageous hypocrisy. They bomb countries all over the world, point nuclear missiles at every corner of the planet, break countless laws, threaten Armageddon like ordering a hamburger, and yet they claim to be "exhausting diplomacy".

Obdurate American leaders don't even know their own history; how they obliterated North Korea during the Korean War (1950-53) killing up to three million civilians. Is it any wonder North Korea has felt compelled to build nuclear weapons as a matter of survival against the genocidal American behemoth?

As Putin said: "North Koreans would rather eat grass than give up their nuclear weapons program."

North Korea has wholly legitimate security concerns. It wants to be left in peace and not continually threatened by the genocidal United States, which never signed a peace treaty at the end of the Korean War. Despite American and Western demonization of North Korea, it is not offensive. All its actions are about deterrence and defense.

© REUTERS / KCNA
Four Reasons Why North Korea is Still Launching Its Missiles
There is a simple and urgent way back from the precipice. Comprehensive talks on all concerns, with North Korea's existential concerns in particular given full recognition.

It is not rocket science. It is a matter of treating other nations with respect.

But this is the thing. The American political leaders are so dense, so stupid, they only know how to drive toward conflict and war, and to sell billions of dollars-worth of weapons. They are so stupid they don't even see how their mentality is putting the whole world in grave peril of final destruction.

The world is being held hostage by idiots. It's like being on a bus careering along cliff top roads, and the driver of this bus is a drunken imbecile.

China and Russia must take world leadership in spite of the Americans. Beijing and Moscow have to reject the US unilateral diktat of sanctions and militarism. As Putin said, there is no use trying to reason with such low-level people. They are beyond reason.

Resolute action is the only way to deal with them. No more sanctions, no military aggression, insist on full compliance with international law. America has gotten away with waging wars of aggression with impunity for far too long. China and Russia must make any US military action over North Korea a red line.