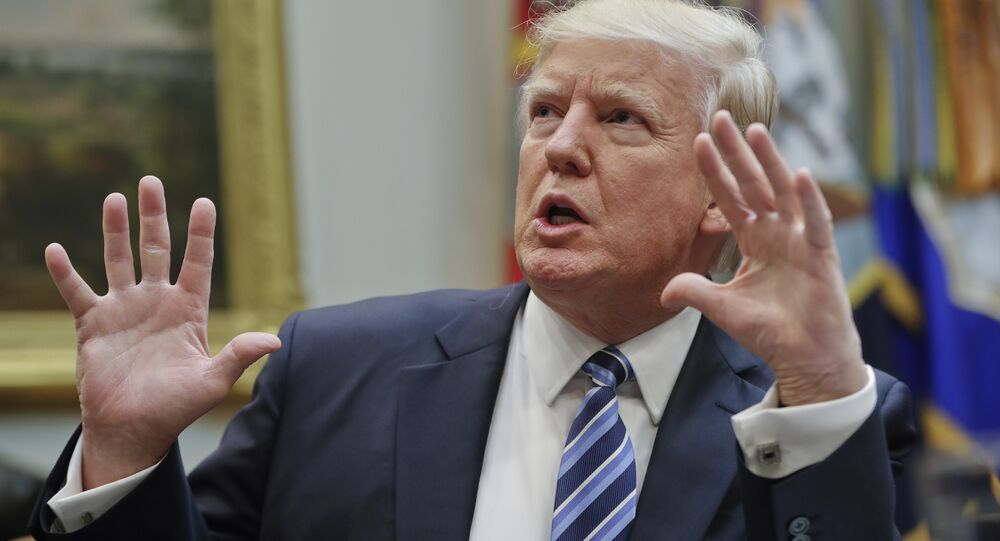 America’s chronic trade deficit with the rest of the world is testimony to a failed US economy. In reality, the US has no-one else to blame but itself for such an historic failure.

But in typical chauvinist fashion, the Trump administration has found a handy scapegoat by blaming China — its top bilateral trading partner. President Donald Trump this week ordered a probe into alleged trade malpractices by China, including claims of intellectual property theft and unfair subsidies.

These supposed grievances against China formed a major part of his election campaign last year, when the tycoon-turned-politician would whip up supporters in rustbelt states with emotive claims about how China was "raping our economy".

Now Trump says he is making good on his electoral promises to "get tough on China". On announcing the trade crackdown this week, the president said: "We will uphold our values, we will defend our workers, and we will protect the innovations, creations and inventions that power our magnificent country."

© AFP 2021 / NICOLAS ASFOURI
Beijing on Possible Trump's China Trade Crackdown Over N Korea: 'It's Unacceptable'
China has warned that if Trump follows through on threats to impose trade tariffs on Chinese exports the move will ignite a trade war, which will inflict serious damage on both economies and the rest of the world.

Trump's nationalistic depiction of trade problems with China is also feeding into the rise of xenophobic and racist politics in the US. The president has come under pressure to disavow white supremacist groups, like the KKK, after deadly protests in Virginia last weekend.

However, his jingoistic rhetoric of blaming foreigners for America's social and economic woes is a toxic embrace of demagoguery that will fuel reactionary rightwing sentiments.

Trump has an odious habit of blaming everyone else for America's contemporary problems. In his nasty transactional worldview, all other nations are taking advantage of "virtuous America".

Thus, Mexico is stampeding "our border"; the Iranian nuclear deal is "the worst ever"; the Trans-Pacific Partnership was "ripping America off"; the Paris Climate Accord was another "bad deal" harming American enterprise; the Europeans need to cough up for NATO; the Germans are flooding US car markets; and so on and so on.

The New York former real estate mogul fancies himself as a business genius. (One wonders how he would have fared if he hadn't inherited a million dollars from his rich daddy to get him started.)

In any case, Trump sounds more like a spoilt brat than an ingenious entrepreneur. His penchant is to blame everyone for failure and to offer quack solutions.

On the alleged China trade disputes, it may sound good to some people among Trump's voter base to harangue China over alleged intellectual property infringements and technology theft. But vilifying China for America's economic and social decline is a dangerous deception.

© AP Photo / Andy Wong
China Ready to Respond to Possible US Trade Restrictions
Trump castigates China for somehow being responsible for the US trade deficit with that country — about $350 billion in 2016. He asserts that the surplus of Chinese exports into the US is because China is stealing American technology and copyrights and flooding the market with fake goods.

But what Trump conveniently omits to say is that the US had a total trade deficit with the rest of the world in 2016 amounting to $740 billion, according to its own government figures. After China, the US trade arrears with the European Union was nearly $150 billion.

Does that mean that the Europeans are also stealing American intellectual property and cheating the US economy with unfair practices?

No. It just means that the US economy has withered away to the point where it depends on the rest of the world for imports. The American manufacturing base has been wiped out. This import dependency and chronic trade imbalance in the US has been going on since at the least the late 1980s. For the past three decades, the US trade deficit has been relentlessly expanding, up from about $100 billion in 1990 to the present figure of $740 billion.

© AP Photo / Alex Brandon
Trump's Possible China Trade Crackdown: 'This is Not Time to Sour Relations'
For Donald Trump to try to blame China for America's abysmal decline is the kind of trick pulled by a con artist. It may play well with people who have prejudices about foreigners and delusional notions of American "exceptionalism" — but such a depiction is nonetheless downright false.

The truth is that it's not foreign nations who are to blame for America's social and economic malaise, it is Americans themselves. Specifically, we are talking about corporate America and oligarchs like Trump who shut down American factories wholesale and ruthlessly downsized workforces in order to set up businesses in cheap-labor countries like China.

Trump and his daughter Ivanka are owners of global retail businesses whose cosmetics and clothing are manufactured in China and exported to the US, thereby contributing to their country's trade deficit.

The historic failure of the American economy is the story of how capitalism is eventually bound to fail. The insatiable pursuit of financial profit as the sole objective leads inevitably to the gutting of one's own country and compatriots if it means that profits can be maximized elsewhere.

For over 30 years, American workers and communities have been decimated by capitalists like Trump and other oligarchs who had no conscience about betraying their compatriots to make big bucks somewhere overseas.

The predatory process of offshoring American jobs to places like China is why the US economy and society has been bled dry. For Trump to blame China for this predation of Americans by corporate America is bitterly ironic.

Here's the doubly odious thing too. In his quack remedy for American economic ills, Trump seems now willing to ignite a trade war with China.

© AP Photo / Ng Han Guan, Pool
Pressure Tool on China: How Washington Uses N Korea Against Beijing
At a time when the world is already convulsed with security tensions between the US and China, Russia, North Korea, Venezuela, Syria, Ukraine, among other nations, it really is the height of recklessness by the Trump White House to escalate tensions even further with a spurious trade war.

Already recriminations between Beijing and Washington are fraught over military jousting over disputed territory in the South China Sea. A trade war will only exacerbate hostilities further.

China has given notice that if Trump goes down the perilous path of a trade war, it will not sit idly by. If China were to redirect its exports to other parts of the globe in retaliation, or dump its huge American dollar holdings, the impact on the US economy will be severe. Inflation of consumer goods would soar, thereby hurting millions of low-income Americans even further.

How reprehensible is that? Trump and his family fortune are the embodiment of how American workers ended up being impoverished under decades of rapacious corporate America. Now selling the American workers a fraudulent explanation for their poverty — by scapegoating China and starting a trade war — Trump is only adding to their misery.

In real-estate scams, it's known as "fleecing the customer twice". Something that Donald J Trump would know all about.

China Ready to Respond to Possible US Trade Restrictions