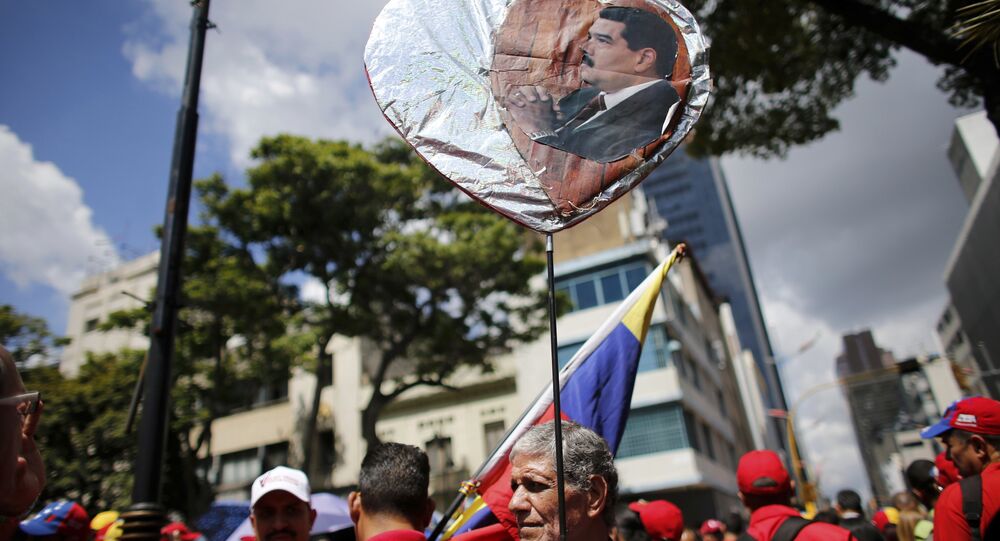 Going Crackers Over Caracas: The War Party Demands We Fall in Line on Venezuela

You might have thought that in the so-called "Free World," people would be free to support or praise whatever governments or political systems they want to, without any serious consequences to themselves or their livelihoods. But if the country or government you want to praise is an "Official Enemy" of the western elites, it's a very different story. The War Party's enemies have to be ours. Yes, siree.

Think of Orwell's 1984, and the Two Minutes Hate. Right now, it's the former bus driver Nicolas Maduro who is playing the role of Emmanuel Goldstein — the man who we are expected to shake our fists at when we watch the "telescreen" — giving those regular "bad guys" Bashar al-Assad and Vladimir Putin a bit of a break.

Maduro acting like a dictator of an evil regime and has destroyed Venezuelan economy, eroded human rights + imprisoned thousands

Over the last week or so there's been a hysterical campaign to get prominent figures in Britain, who in the past had expressed their solidarity with the Bolivarian Republic of Venezuela — like Labour leader Jeremy Corbyn — to issue public denunciations. Never mind if the individuals concerned were on their summer holiday — as Jezza was. That's no excuse.

The "Labour silence" was tantamount to treachery, the War Party cried. Cycling around Croatia in your short-sleeved white shirt, shorts and socks and admiring the beauty of the old quarter of Dubrovnik is just not on, when there's another leftist government sitting on huge reserves (and which has friendly relations with Syria), to urgently topple.

#CorbynMustCondemn the rain, it's always raining and he does nothing about it. I hear Labour are planning an umbrella tax — %5 down %10 up

Interestingly there have been no such calls for Tories (or Blairite Labour MPs) to break off from their vacations to denounce the genuinely undemocratic leadership of Saudi Arabia or NATO ally Erdogan in Turkey, who's has a right old crackdown since the attempt to topple him in a coup last year failed. And the people demanding condemnations of Venezuela for being a "dictatorship" have been very quiet about the eye-catching 98.63% vote achieved by Tony Blair's friend Paul Kagame in Rwanda earlier in August.

The neocon Establishment — with onion slices concealed in their handkerchiefs — feign humanitarian concern for the plight of the masses in Venezuela, while, at the same time turn a blind eye to the devastating cholera epidemic currently spreading across war-torn Yemen. Any genuine humanitarian who cared about human suffering on this planet would put Yemen as the top of his/her concerns, but its the western bombs which are doing the damage in that country, so the War Party are very keen to divert our attention elsewhere.

Establishment-friendly media has played its full part in The Great Venezuela Inquisition. Earlier in August there was a ludicrous exchange on Newsnight, the BBC's regime-change addicted "flagship" current affairs program, in which a Corbyn-supporting Labour MP Chris Williamson was asked by presenter Evan Davis if he was closer to Hugo Chavez or Tony Blair. That's right. A choice between a man who worked tirelessly to help the poor and to make his country independent from the neo-colonialists and a snake oil salesman who invaded Iraq on a lie, and whose warmongering left over one million people dead.

To ask the question "Blair or Chavez?" is to answer it. No genuine socialist or progressive could possibly opt for the man who assured us Iraq had WMDs, which threatened the world and which could be activated within 45 minutes.

Next door in Colombia is the most dangerous place in world to be a trade unionist. Blair and New Labour armed Colombia. Deeply shameful https://t.co/NXIEQFKsA7

As part of the War Party's propaganda campaign, the words of those who have committed the heinous "crime" of expressing support for "Chavism" have been shamefully distorted. Countering the blatant lie that multi-party Venezuela was a dictatorship, the former Mayor of London Ken Livingstone pointed out that the late Hugo Chavez didn't go around executing his enemies — the sort of thing genuine dictators do. That was twisted into headlines such as "Ken Livingstone: Venezuela Crisis due to Chavez's failure to kill oligarchs." Livingstone was forced to respond to the media representations of what he had actually said:

"I have not said that Hugo Chavez should have killed anyone and nor would I ever advocate it. I even dispelled this accusation in the very interview that is being extensively quoted.

"The point I was making is that, contrary to some misrepresentations, Hugo Chavez didn't repress the former ruling elite in Venezuela."

Even condemning "all violence" in Venezuela, as Jeremy Corbyn did after he returned from his holiday, won't be enough to get the regime-change obsessives from snapping at your heels. Only violence carried out by government supporting forces counts. The violence carried out by opposition activists against United Socialist Party supporters, the police and the security services does not qualify. Those killed or injured in such attacks, like the young black man burned to death in early June are "un-people," like the victims of terrorist attacks by CIA-backed "rebels" in Syria, those killed in the 2014 Odessa fire, and the 16 media workers who lost their lives when NATO bombed Serbian TV in 1999.

The double standards of the "You Must Condemn Maduro" Thought Police are truly breathtaking. Anti-government street protesters at home are routinely labeled "thugs and scum," but violent ones, who go out on to the streets in "Official Enemy" countries to try and topple their governments are lauded. Establishment respect for "law and order" and condemnation of ''anarchy" and "mob rule" is not universal — it only applies in "approved" nations. Call for a riot in the UK, and you'll be arrested before you have time to do your next weekly shop in Aldi, but call for one in Venezuela and you'll probably get State Department/NED funding (that's if you aren't already on the CIA's or MI6's payroll).

If what's playing out before our very eyes in Venezuela seems familiar then it's not surprising. This is a movie we've seen many times before. Think of the "pro-democracy" US-backed anti-government protests in Yugoslavia in 2000, which toppled the Socialist-led administration there, and the "pro-democracy" US-backed-ones in Ukraine in 2014. On both occasions, the "target" governments — and their leadership — were placed in a very difficult position. If they responded to what were clear attempts to usurp power by force — by using force themselves — they knew they would be condemned by the War Party and its media stenographers as "dictators, human rights abusers, war criminals, Nazis, Stalinists" — take your pick. If they did nothing and allowed the protesters to act with total impunity, they'd lose power.

It's important for the neocon regime changers that we don't see the bigger picture. We're not supposed to reflect on the millions of dollars which has poured into opposition coffers from the US —just imagine the outcry if the Venezuelan government bankrolled anti-government activists in western countries.

Ironically CIA admits working to change #Venezuela's Govt whilst US is angry at Russia for alleged interfering with its elections #hypocrisy https://t.co/gdGfF1ThFw

We're not expected to focus either on the economic warfare that the US and the western financial/corporate elites have waged on Venezuela for the country's refusal to toe the line. Of course, Maduro's government has made mistakes, with the biggest being the failure to diversify the economy when oil prices were high — a point that Jeremy Corbyn made earlier. But acknowledging this is a very different thing from joining in with State Department calls for "regime change" against a legitimate and democratically elected government which still has sizable popular support.

The same journalists cared deeply about human rights in Iraq and Libya — until the regimes were toppled. Complete non-issues now. https://t.co/dvxtltHbd1

The excellent media monitoring organization Media Lens has compared and contrasted the "deep concern" shown by War Party media propagandists for "human rights" in a "target" country, before a western-sponsored regime change takes place, and their lack of interest in the people's plight afterwards, when things invariably get much worse. Neocon/liberal-imperialist hacks couldn't stop writing about Iraq in late 2002 and early 2003, and the need to "liberate" its people and make the world safe from its non-existent WMDs, but after the invasion, when the country descended into total chaos and bombs were going off on a daily basis, Iraqis were of no interest to them. The papers were full of op-eds calling for "action" to save the people of Libya in early 2011, but after Gaddafi was toppled and Libya became a failed state and a jihadists playground, it all went very quiet.

The same will happen again if Maduro falls. The War Party are going crackers over Caracas only because they want Venezuela's government forcibly removed from office. Nothing else matters to them.

If we are to issue public condemnations, then let it be of the serial warmongers and "regime-changers," who caused so much devastation in Yugoslavia, Afghanistan, Iraq, Libya and Syria — and who have the nerve to always point the finger of blame at others.