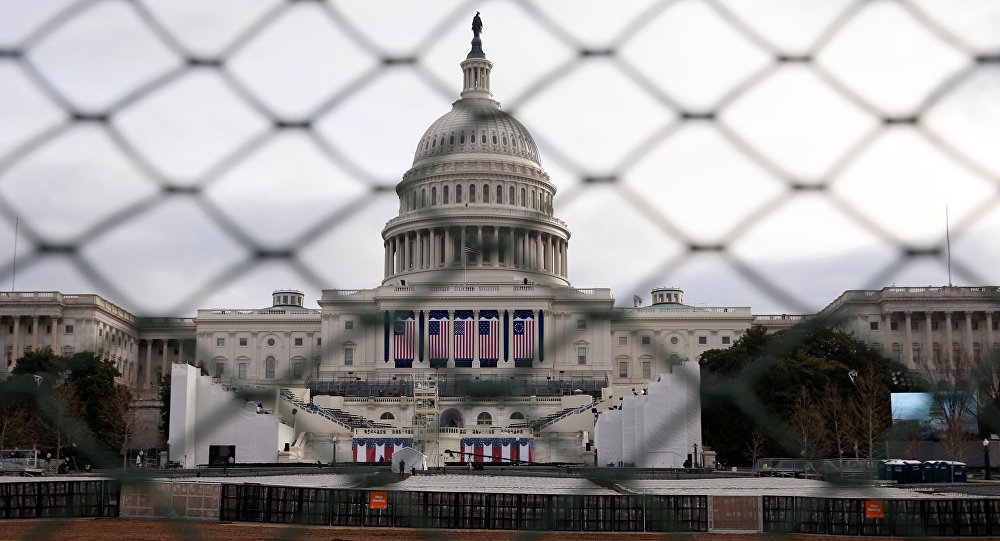 So the American bully wants to slap more sanctions on Russia over alleged misdeeds. This is blatant temper tantrums by a frustrated US trying to get “its way or no way”.

It’s so absurd. The biggest rogue nation on Earth, illegally bombing and killing civilians in several countries simultaneously, covertly arming terrorist proxies in the Middle East, and a rampant subversive interferer in foreign elections around the world, has the audacity to lecture others about probity, resorting to financial arm twisting that makes a mockery of international laws and trade rules.

Well, after all, the Americans do always declare themselves to be “exceptional”. Never a truer word was spoken, albeit inadvertently.

© Sputnik / Igor Mikhalev
Dashed Hopes: Russia, US Bracing for Sanctions War
This week, the US House of Representatives voted overwhelming to approve tougher new sanctions on Russia. The Senate is expected to rubber-stamp the bill and then President Trump will most probably sign into law. He is becoming a lame duck president due to the rampant Russophobia in the US.

Russia’s deputy foreign minister Sergey Ryabkov deplored the latest move to tighten punitive measures on the country’s energy, banking and defense sectors, among others. He said it was a calculated step to destroy any prospect of normalizing ties between the US and Russia. “It is beyond common sense,” said Ryabkov, adding that American legislators “know no restraint in their anti-Russia zeal” and that they are “out of control”. In short, collectively insane.

Few sane people – apart from US politicians and media pundits – would welcome a further deterioration in relations between the world’s two nuclear superpowers. And truth be told, Moscow has up to now shown great patience and amenability to try to improve bilateral ties. But the US political class has shown no interest whatsoever in pursuing any reconciliation. It’s like it has a death-wish.

American lawmakers endorsing the latest sanctions were almost foaming at the mouth, labelling Russia an enemy and citing unhinged accusations against Moscow for meddling in last year’s presidential elections, also for destabilizing Ukraine and, wait for it, “propping up the Assad regime in Syria” – the country where the American CIA has been propping up head-chopping jihadist terrorists for the past six years.

© Sputnik / Igor Mikhalev
'Fool-Proof' Bill Against Trump? Who is Interested in New Anti-Russian Sanctions
However, let’s step back a moment. Another way of looking at this geopolitical impasse fomented by the US is that it is actually a good thing. US politicians and large sections of the media are so deranged with anti-Russia hysteria and irrational views on international matters, there is simply no chance of engaging them with normal dialogue.

Better to let the American political class consume itself with its own toxic paranoia and delusions about the world, and toward Russia in particular. Let them destroy themselves politically in their isolated paranoid state and endless duplicity.

A sign of the impending American political self-destruction is the furious reaction from Europe over the latest sanctions. The Europeans are at last waking up to the fact – long overdue – that Washington is acting brazenly for its own selfish interests and is prepared to inflict pain on Europe, if needs be.

The European Commission, which oversees EU trade policy, as well as Germany and Austria have expressed outrage over Washington’s “hidden agenda” which is disguised in the self-righteous and disingenuous rhetoric of sanctioning Russia.

It’s not Russia being sanctioned so much as America sanctioning its own allies.

© AP Photo / Virginia Mayo
European Barrier: EU Could Respond to US Anti-Russian Sanctions Extension
Of course, this is what the whole American brouhaha over sanctions on Russia is all about. It’s got nothing to do with “disciplining” Russia over alleged misdeeds. How could such pious rhetoric be taken seriously from the planet’s biggest rogue state?

No, it’s all about foisting American energy gas supplies on to a new European market by displacing Russian exports. When Donald Trump was visiting Poland last month, he made an unvarnished sales pitch to the Poles and other Central European countries to buy American gas. Even though the US supply would be much more expensive than Russia’s.

That’s why Trump will likely sign off on the new anti-Russia sanctions. While the president has at times expressed an interest in normalizing ties with Russian leader Vladimir Putin, Trump’s top priority is to promote American trade interests. He wants to reduce the yawning US trade deficit with Europe by forcing the latter to buy American gas, instead of Russian.

So much for American capitalism obeying the rules of “supply and demand”. And so much for the Americans declaring to be an “ally” of Europe acting always “to protect” it from “Russian aggression”.

The delusional, paranoid Americans would be happy to see Europe freeze to death, being cut off from affordable Russia gas. Washington in its short-sighted stupidity would plunge Europe into economic recession, industrial failure and rising unemployment just to sell the continent more of its own expensive gas.

America’s sanctions policy against Russia is a thermometer of grave political ill-health among its politicians and media. If the Americans want to conduct their government business and foreign policy based on delusional hysteria, then let it be. Sooner or later, a nation driven by such crazed thinking will destroy itself and its supposed allies.

© AFP 2019 / SAUL LOEB
Four Possible EU Answers to New US Sanctions Against Russia
The outbreak of anger among European nations toward American self-entitlement to damage European interests is also a temperature reading indicating fever pitch out of control. It is an astounding display of arrogance when Washington is, in effect, attempting to overhaul European energy and trade policy for the naked benefit of US interests.

American sanctions against Russia are more a cry of desperation by the US political class whose economy is tanking and whose standing in the world is sliding to unprecedented low levels. Scrabbling to offset the historical demise, the idiotic American “leaders” are lashing out with anti-Russia hysteria and damaging blows to even their own supposed allies in Europe.

The much-vaunted “transatlantic bond” between the US and Europe was always an over-rated cover for the Americans to lord it over what they considered to be their European vassals. Russia, unfortunately, has been vilified to provide an excuse for this hegemony. But so arrogant, so desperate are the American rulers today that the charade of US-European “partnership” is in danger of unraveling.

If such sanctions help cast a light on the decay of America’s once formidable global empire then bring them on.

There’s a big multi-polar world out there. Russia, Iran, China and the Europeans, if the latter get their act together, must learn to walk away from the American sulking bully and let it fester in its own decadence.

The bankrupt US – morally, politically, economically – has nothing worthwhile to offer the world. Its so-called leadership is a lost cause. Attempting to engage with this parasitic wreckage is only a drain on resources.